Greene: What Obama is leaving behind 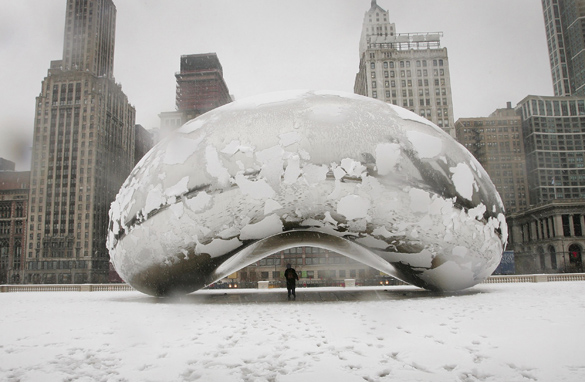 CHICAGO, Illinois (CNN)– On a sloppy, snowy, ice-covered day here, Barack Obama is making imminent plans to head for Hawaii, and thus end the long presidential transition period he has spent in Chicago.

What Obama leaves behind as he, with any luck, beats the weather out of here over the weekend is a town that on some level is still a little woozy over how his accomplishment– becoming the first Chicagoan in the nation's history to be elected president of the United States– has upended the city's natural political order.

On a recent evening, in a steakhouse near downtown, sitting deep in conversation at a table next to the wall were two men who kept drawing openly curious glances from the other customers during their entire meal. If this were Los Angeles, maybe Brad Pitt and Jennifer Aniston in a restaurant would have the magnetism to attract such star-struck stares; if this were New York, perhaps Derek Jeter and Matt Lauer would be the objects of such attention.

In Chicago, though, the men on the receiving ends of the stares were two brothers who probably wouldn't be recognized in most other towns: Bill Daley, attorney, business executive, former secretary of commerce, and his brother John, member of the Cook County Board of Commissioners. It was a table for four, and the pair of empty seats invited silent speculation from the other diners: Would a third Daley brother, the mayor, Richard M., be joining his family tonight? And the final empty chair, as it inevitably does at a Daley table, reminded anyone with a long enough memory of the man who wasn't there, but seemingly somehow always is: the late Richard J. Daley, father of the boys, mayor of mayors.

He's been dead since a December day on this very week in 1976, but the city is still his, which is why the presence of Obama has been such a stylistic shock to the local political system. The president of the United States has never been considered to be the most powerful man in Chicago; the most powerful man in the world, maybe, but not in the environs of State and Madison. Generations of Chicago children grew up assuming that the most influential person in the United States was the chairman of the Cook County Democratic Central Committee, who for many years was the same person who was mayor of Chicago: the first Richard Daley.

In other cities, mayors may have pursued meetings with presidents; in Chicago, presidents pursued meetings with the mayor. What was that famous comment Robert F. Kennedy made when he was laying out plans to run for the presidency in 1968? “Daley's the ballgame.” It might not have had the same ring to it as “Change We Can Believe In,” but Kennedy knew what he was talking about.

Part of the steadiness of the natural order was the assumption that no one from Chicago– certainly not the mayor– was ever going to make a run for the presidency. Why would a man leave the mayor's office to pursue a less desirable job? And because no one from here, before Obama, was ever elected president. . .well, never before has there been the low-grade awkwardness that has accompanied the Chicago transition.

It's not a resentment– Bill Daley is helping to run the inaugural festivities in Washington– just this ethereal feeling, ever since Election Day, that the stars in the Chicago sky are slightly out of their regular alignment. There has been a president-to-be living in town for many weeks now, and once he arrives in Hawaii for vacation, and then moves into his new, if temporary, home on Pennsylvania Avenue in Washington, the Chicago he is leaving behind will begin to feel again like the Chicago in which he first arrived.

First, though, he has to beat the snow out of here. There is a copy of a letter in existence that, in ways that could not have been intended when it was written last month, makes it a valuable historical artifact. Sometimes when politicians in Illinois have to resign early from their jobs, it is to set up residence in federal corrections facilities. But this resignation letter had a different tone.

It was written on November 13, and was addressed to “The Honorable Rod Blagojevich, Governor, State of Illinois.”

The letter was brief, a model of economy:

In blue ink, it was signed: Barack Obama.

People leave Chicago for varying reasons, but never before for this one. It's going to take some getting used to. By the man who's leaving, and by the town in his rear-view mirror.