Biden: The economy is 'in much worse shape than we thought'

[cnn-photo-caption image= http://i2.cdn.turner.com/cnn/2008/images/12/20/art.biden1.gi.jpg caption="Biden (above: in Chicago with President-elect Obama last week), gave his first interview since the election."] (CNN) - Vice president-elect Joe Biden told an interviewer the nation’s economy “is in much worse shape than we thought it was in,” and the immediate goal is to pass another stimulus package to prevent it from "absolutely tanking."

"There is going to be real significant investment," Biden said in an ABC interview scheduled to air Sunday. "Whether it's $600 billion or more, or $700 billion, the clear notion is, it's a number no one thought about a year ago.

"...The single most important thing we have to do as a new administration, to have - to be able to have impact on all of the other things we want to do, from foreign policy to domestic policy, is we've got to begin to stem this bleeding here and begin to stop the loss of jobs in the creation of jobs," said Biden, who also said he had spoken with members of Congress from both parties about a new stimulus.

Biden -– who drew criticism from some recently for adopting a German shepherd puppy from a breeder instead of a shelter - also said in the interview he and his wife would be getting a “pound dog” as well, possibly a golden retriever.

“It’s time we once again put science at the top of our agenda and worked to restore America’s place as the world leader in science and technology,” he said in his Saturday radio address, in an apparent offhand swipe at President Bush.

“It’s about listening to what our scientists have to say, even when it’s inconvenient – especially when it’s inconvenient,” Obama said, adding that government support had been essential for the greatest scientific breakthroughs of recent history, like the development of the Internet. “Because the highest purpose of science is the search for knowledge, truth and a greater understanding of the world around us."

END_OF_DOCUMENT_TOKEN_TO_BE_REPLACED

[cnn-photo-caption image= http://i2.cdn.turner.com/cnn/2008/images/12/20/art.inaug.cnn.jpg caption="DC is getting ready for the big day – but some are worried about the morning after."]WASHINGTON (CNN) - When President-elect Barack Obama takes the oath of office next month, the nation's capital will be the site of a massive celebration. But local officials are worried they might get stuck with the check.

Even for a city used to big crowds, Obama's inaugural promises to shatter records for attendance. City officials predict up to 2.5 million people will converge on Washington January 20, and they are taking unprecedented steps to accommodate the masses. Plans are in the works to open up the National Mall, extend hours for public transportation and - perhaps most daunting - provide parking for the influx of revelers.

"Even though we're very practiced at inaugurations and large events, this is one that will rewrite the book on inaugurations," said the Rep. Eleanor Holmes Norton, D-DC, who has requested an additional $15 million from Congress to help the city cover costs. That would double the $15 million Congress has already allocated to pay for all national events and demonstrations in Washington during 2009.

DC Mayor Adrian Fenty agreed costs for increased security and crowd control would dwarf the original allocation. And for a city facing a budget shortfall and the same economic downturn affecting the rest of the country, now is not the time to rack up debt, Fenty told CNN.

END_OF_DOCUMENT_TOKEN_TO_BE_REPLACED

[cnn-photo-caption image= http://i2.cdn.turner.com/cnn/2008/images/12/20/art.ballot1.gi.jpg caption="The Franken team said they expect him to come out on top when the Senate race recount ends."] MINNEAPOLIS, Minnesota (CNN) - Democrat Al Franken's team said Saturday that after all challenged ballots have finally been sorted, they expect to come out on top with a 35 to 50 vote lead.

Marc Elias, the Franken team's lead recount attorney, said in a press conference that the approximately 4,000 withdrawn challenges from both campaigns yet to be added to the current numbers by the state canvassing board have already been included in the campaign's internal count.

"Al Franken will have a lead of between 35 and 50 votes. And, at some point not too long after that, Al Franken will stand before you as the Senator-elect from Minnesota," Elias said.

(Update after the jump: The Coleman camp fires back)

END_OF_DOCUMENT_TOKEN_TO_BE_REPLACED

iReport: What do you think of the auto bailout?

[cnn-photo-caption image= http://i2.cdn.turner.com/cnn/2008/images/12/20/art.cars.gi.jpg caption="Was the auto bailout a good call?"] (CNN) - President Bush announced this week that the federal government will provide $13.4 billion in loans to the nation's automakers.

How will this affect you? Do you work for Chrysler or GM?

We want to hear what you have to say. Send us a short video commentary and send us photos and video from your town.

[cnn-photo-caption image= http://i2.cdn.turner.com/cnn/2008/images/12/20/art.hawaii.gi.jpg caption="The Obamas (above: daughters Malia and Sasha) are headed back to Hawaii."] (CNN) - President-elect Barack Obama and his family headed to Hawaii by charter flight Saturday for a two-week Christmas vacation.

The Obamas will spend the holidays with Chicago friends who will join them in the president-elect’s birth state - where the daytime high temperature is running between 40 and 50 degrees above the Windy City's.

[cnn-photo-caption image= http://i2.cdn.turner.com/cnn/2008/POLITICS/12/20/oil.drilling/art.gas.prices.gi.jpg caption="As the price of gas surged past $4 a gallon this summer, U.S. drilling became a hot political issue."] WASHINGTON (CNN) - Remember "drill, baby drill"? In its last weeks in office, the Bush administration is starting to make it happen by quietly starting the process of exploration and drilling off the coast of Virginia.

The move means that President-elect Barack Obama and brand new interior secretary nominee Ken Salazar - a Democratic senator from Colorado - will have to jump feet-first into the decades-old debate over offshore oil drilling. It's an issue where the two disagreed at one point.

Watch: Obama's choice for the Interior Department isn't all green, say some

The state is ground zero for the drilling debate because of possible reserves off the coast and what energy experts see as a friendlier government than elsewhere.

Capital view: Countdown to the inauguration 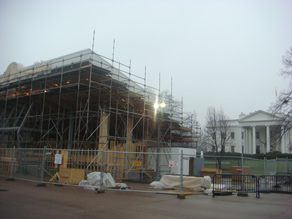 The pace of inauguration preparations is picking up in Washington. Above: the reviewing stand in front of the White House where the president will sit when the inaugural parade goes past the White House on Pennsylvania Avenue. (Photo credit: Bob Kovach/CNN)