First-of-its-kind RNC meeting to be held in Washington

[cnn-photo-caption image= http://i2.cdn.turner.com/cnn/2008/images/12/29/art.duncan29.gi.jpg caption="RNC chair Mike Duncan faces a tough race to keep the top spot."](CNN) - Members of the Republican National Committee are planning to hold a Washington forum for candidates to lead the party – the first time they have held an official meeting not arranged by the national party.

The meeting, first reported by The Hill, was the brainchild of North Dakota Republican Party chairman Gary Emineth and nearly two dozen RNC members from 18 states, according to the RNC counsel’s office.

Most of those are supporters of one of the challengers to current RNC chair Mike Duncan. The newly-scheduled forum – which was not arranged by national leadership, headed by Duncan - may give a boost to these candidates, who will get an opportunity to make their pitch to the members of the national committee.

Under RNC rules, a minimum of 16 members from 16 different states is required to hold an official meeting – but CNN has not been able to find any prior instance when this rule has been invoked.

The meeting comes in a week of faceoffs and public grillings for RNC chair hopefuls - some open to the public, others private events for conservatives and party members.

Prosecutors may release some Blagojevich tapes to IL lawmakers

Fitzgerald's decision follows a request from the Illinois House of Representatives' Special Investigative Committee, which is considering impeachment charges against the Illinois governor.

In a motion filed Monday, Fitzgerald wrote, "Although many relevant communications were intercepted, the government believes that, on balance, it is appropriate to seek the disclosure of four intercepted calls, in redacted form, to the Committee, and that disclosure of the calls by themselves would not interfere with the ongoing criminal investigation."

END_OF_DOCUMENT_TOKEN_TO_BE_REPLACED

(CNN) - Tanks are rolling and bombs are falling as the conflict between Israel and Hamas continues with no end in sight.

In the latest installment of CNN=Politics Daily, President Bush is responding to the current situation in Gaza, but will President-elect Obama inherit the crisis? CNN’s Elaine Quijano has the latest on how the political leaders are handling the events on the Gaza Strip.

Plus: Obama faces another kind of war when he inherits the presidency in January - one that takes place online. Cyberterrorism can halt traffic, freeze finances, and knock out water, sewers, and electricity. CNN’s Jeanne Meserve looks at what’s at stake in the Obama administration.

Plus: Republican National Committee chairman candidate Chip Saltsman sparked a firestorm of criticism with his decision to release a controversial Christmas CD featuring a parody song titled, “Barack the Magic Negro.” What does this mean for the GOP’s efforts to regroup after a tough year? CNN’s Jim Acosta takes a look at the political fallout.

Finally: Barack Obama has been hitting the gym for months, and the public has noticed - thanks to the now-famous shirtless photo taken on the beaches of Hawaii.  CNN’s Ed Henry decides to follow Obama’s rigorous work-out schedule. But does he have what it takes to look like the President-elect?

[cnn-photo-caption image= http://i2.cdn.turner.com/cnn/2008/images/12/29/art.rahmblago1229.gi.jpg caption="Rahm Emanuel, pictured in this 2003 file photo with Blagojevich, released a resignation letter to the Illinois governor Monday."]
(CNN) – President-elect Obama’s team, which spent weeks documenting chief of staff Rahm Emanuel’s contact with Rod Blagojevich, got another entry for the list Monday, when the Illinois congressman sent a resignation letter to his state’s embattled governor.

“It has been a tremendous privilege to serve the people the Fifth District [of Illinois] over the past six years,” Emanuel writes in the letter to the man who once held his House seat, announcing that his resignation from the House will take effect on January 2, 2009.

“As sons of immigrants to this country,” writes Emanuel, “you and I have a deep appreciation for the opportunities America provides to those who are willing to work hard and sacrifice for their children.” As the letter ends, he offers the scandal-scarred governor his “gratitude and best wishes.”

An internal investigation cleared Emanuel and the rest of Obama’s transition team of any wrongdoing in Blagojevich’s alleged plan to trade an appointment to Obama’s U.S. Senate seat for political favors.

The Illinois House panel considering impeachment charges against Blagojevich reconvened Monday and is hearing argument from the governor’s attorney.

In conjunction with the letter released Monday, Emanuel also sent automated calls to residents in his congressional district notifying them of his impending resignation.

Blagojevich himself was elected to the Illinois Fifth District’s House seat in 1996. 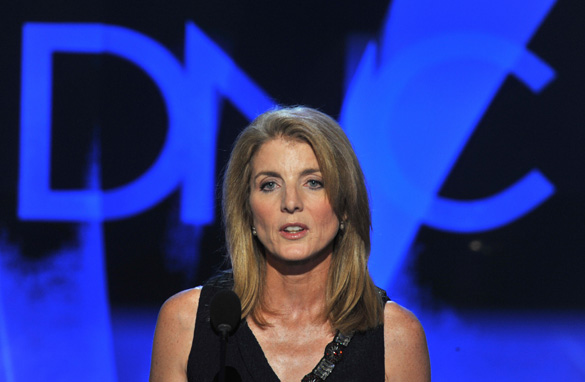 Women are more likely than men to see Caroline Kennedy as qualified to be New York's next senator, according to a new CNN/Opinion Research Corp. poll released Monday. (Getty Images/File)

(CNN) - A new national poll suggests that men and women don't see eye to eye on the question of whether Caroline Kennedy is qualified to serve as a U.S. senator.

Just over half of all Americans questioned in a CNN/Opinion Research Corporation survey released Monday say that Kennedy is qualified to be a senator: 52 percent say she is, and 42 percent disagree.

"Men may think of qualifications for public office in terms of work experience, while women may be looking at a candidate's life experience," says CNN Polling Director Keating Holland. "Caroline Kennedy has a personal history that may be compelling to many women, but her resume is not very long, and that may be a mark against her to some men."

END_OF_DOCUMENT_TOKEN_TO_BE_REPLACED

[cnn-photo-caption image= http://i2.cdn.turner.com/cnn/2008/images/12/29/art.getty.gaza.protesters.jpg caption="Civilians protest in opposition to Israeli military action in Gaza."]WASHINGTON (CNN) - The American Muslim Taskforce for Civil Rights and Elections called on President-elect Barack Obama for greater Muslim outreach during his administration as well as assisting in ending the deteriorating situation in Gaza and the Middle East.

"We demand that our government, the U.S. government, take immediate steps to end the immoral and illegal Israeli bombardment of Gaza and its population," said Nihad Awad, executive director of the Council on American-Islamic Relations.

The AMT also said the United States  must look at any violations of international and domestic law that occurred as a result of the ongoing Israeli military operations in Gaza.

END_OF_DOCUMENT_TOKEN_TO_BE_REPLACED

[cnn-photo-caption image= http://i2.cdn.turner.com/cnn/2008/images/12/29/art.shanklin.cnn.jpg caption="Shanklin’s album is stirring new controversy among conservatives."](CNN) – Republican Party reaction remains divided over the decision of a candidate for party chairman to distribute a CD that featured the parody tune “Barack the Magic Negro,” with the majority of Chip Saltsman’s political rivals criticizing the move.

Republican National Committee Chairman Mike Duncan – battling to keep his job as head of the party – was the first prominent member of the GOP to criticize Saltsman for sending committee members the song.

"The 2008 election was a wake-up call for Republicans to reach out and bring more people into our party," RNC Chairman Mike Duncan said in a Saturday statement.

"I am shocked and appalled that anyone would think this is appropriate, as it clearly does not move us in the right direction."

Michigan party chairman Saul Anuzis also questioned Saltsman’s judgment. "In my opinion, this isn't funny and its in bad taste," he said in a statement. "Just as important, anything that paints the GOP as being motivated in our criticism of President-elect Obama by anything other than a difference in philosophy does a disservice to our party."

END_OF_DOCUMENT_TOKEN_TO_BE_REPLACED

[cnn-photo-caption image= http://i2.cdn.turner.com/cnn/2008/POLITICS/12/29/obama.gaza/art.obama.gaza.gi.jpg caption=" Barack Obama reiterated his support for Israel when he visited Sderot in July."]
(CNN) - As the violence rages in Gaza, President Bush is putting the blame squarely on Hamas, while President-elect Barack Obama is keeping a low profile and sticking by his belief that "there is only one president at a time."

But with less than a month until the inauguration, the president-elect could inherit an international crisis - one he will not be able to defer to Bush.

Israeli airstrikes pummeled Gaza for a third day Monday as part of what Israel's defense minister called "an all-out war" with Hamas. Israel says the attacks are a response to escalating rocket attacks against southern Israel.

Israel has tanks on the border and has approved the call-up of 2,000 reservists, but there was no indication of a Israeli ground incursion Monday. However, Israeli politicians say that all options are on the table.

The Hill: RNC members call unprecedented special meeting
For the first time in party history, members of the Republican National Committee have called their own unscheduled meeting without the aid of the Washington-based party apparatus.

CNN: Laura Bush ‘wasn’t amused’ by shoe incident
First Lady Laura Bush said that although she “wasn’t amused” when an Iraqi journalist threw shoes at her husband, she sees the incident as a sign that “Iraqis feel a lot freer to express themselves.”

CNN: Obama closely monitoring Gaza, adviser says
The president-elect's senior adviser said that while Barack Obama is monitoring the situation in Gaza closely, "the fact is that there is only one president at a time."
END_OF_DOCUMENT_TOKEN_TO_BE_REPLACED