Obama family to move to DC this weekend, say aides

[cnn-photo-caption image= http://i2.cdn.turner.com/cnn/2008/images/12/30/art.obamas.gi.jpg caption="The Obamas are moving early in part so daughters Malia and Sasha, above, can start school on time."](CNN) - The Obama family is planning to move to Washington this weekend, say two transition officials. “They will stay at a Washington hotel through the 15th and then they will move into the Blair House,” said the first official.

President-elect Barack Obama and wife Michelle are coming to DC early in part to be there for the beginning of school for daughters Malia and Sasha, but will not specify which day that will be.

GOP to Dems: Slow down on stimulus bill

WASHINGTON (CNN) - Top congressional Republicans cautioned Democrats not to rush through a massive stimulus package that lawmakers hope to send to President-elect Barack Obama shortly after he takes office next month.

A House Democratic leadership aide told CNN on Tuesday that Congress will likely take up a stimulus bill the second week of January.

Senate Minority Leader Mitch McConnell, R-Kentucky, said the Congress must prove to taxpayers that the stimulus bill, which some economists suggest could amount to $1 trillion, "is not wasting their money."

"We should have a simple test: will the yet-unwritten, reportedly trillion-dollar spending bill really create jobs and grow the economy - or will it simply create more government spending, more bureaucrats and deeper deficits?" McConnell said in a statement Monday.

McConnell's $1 trillion figure for the stimulus bill may be an overestimate, however.

[cnn-photo-caption image= http://i2.cdn.turner.com/cnn/2008/images/12/30/art.inaug30.gi.jpg caption="Inauguration preparation continues in Washington."](CNN) - The presidential inaugural committee has borrowed a page from the president-elect's campaign playbook, offering donors the chance to enter a lottery so they can be on hand for the big event - and now, an essay contest that promises the same chance for those who keep their purse-strings closed.

But the committee still expects something in return for a shot at the prize announced Tuesday, which includes: round-trip tickets to Washington, DC, a hard to come by two-night hotel stay, and tickets for winners and a guest to Barack Obama's swearing-in, the inaugural parade, and one of the night's official inaugural balls.

Those interested need to submit an essay by midnight on Thursday, January 8 on the question: "What does this inaugural mean to you?" Committee staff will pick the ten winners.

The committee has said they need to turn to untraditional fund-raising efforts because of new limits the Obama team has placed on the size of donations to help fund inaugural festivities.

Obama's team used a similar fundraising approach during the presidential campaign, offering supporters the chance to win tickets to his acceptance of the Democratic nomination in Denver this summer, and election night celebration in Chicago last month.

Road to stimulus: Speed bumps ahead

[cnn-photo-caption image= http://i2.cdn.turner.com/cnn/2008/images/12/30/art.stores.gi.jpg caption="Stimulus push comes as consumer confidence drops to an all-time low."]NEW YORK (CNNMoney.com) - Democratic lawmakers want to pass a far-reaching bill to save the economy by Inauguration Day on Jan. 20.

But the reality may be a little different. Enactment of an economic stimulus bill could be pushed into late January or early February, said Dan Clifton, a Washington-based analyst with the investment research firm Strategas Research Partners.

The reason: The measure will be big and complex – exceeding $700 billion by some estimates. And getting buy-in from lawmakers angered about the mounting toll of government rescues might take more time than expected.

Burris will appear on CNN's Campbell Brown: No Bias, No Bull tonight at 8 p.m. ET

Twelve years later, Burris was elected attorney general in the state, the second African American in the country to reach that position.

END_OF_DOCUMENT_TOKEN_TO_BE_REPLACED

WASHINGTON (CNN) – Caroline Kennedy’s $2,300 donation to Hillary Clinton’s presidential campaign was not returned because of her decision to endorse Barack Obama in the Democratic primary, a Clinton aide told CNN — it was sent back because the New York senator’s loss meant she would not be able to keep funds that had been contributed for her general election campaign.

The return was first reported Monday by the New York Post’s Page Six. Information available on Opensecrets.org confirms that a donation to Clinton from Kennedy was returned in August of this year, but does not provide any reason that the $2,300 was returned. Information available from the Web site of the Federal Election Commission shows that Kennedy donated the legal maximum of $4,600 to Clinton in June 2007 in two separate donations of $2,300 each.

A spokesman and adviser to Sen. Clinton informed CNN that Kennedy was one of approximately 8,000 donors who all had their contributions for Clinton’s general election bid returned on the same day four months ago.

"Roland Burris is a good man and a fine public servant, but the Senate Democrats made it clear weeks ago that they cannot accept an appointment made by a governor who is accused of selling this very Senate seat. I agree with their decision, and it is extremely disappointing that Governor Blagojevich has chosen to ignore it. I believe the best resolution would be for the Governor to resign his office and allow a lawful and appropriate process of succession to take place. While Governor Blagojevich is entitled to his day in court, the people of Illinois are entitled to a functioning government and major decisions free of taint and controversy," said President-elect Obama.

[cnn-photo-caption image= http://i2.cdn.turner.com/cnn/2008/images/12/25/art.capitol.gi.jpg caption="Preparations are non-stop for the January 20 event."] (CNN) - There are still a host of question marks around next month’s inauguration festivities, but one thing is undeniable: the day may be geared less to your average middle schooler, and more to a field-tested U.S. Marine.

But getting there in the first place poses a logistical challenge that’s not for the faint of heart or limb. Despite a new plan to turn big sections of the city into parking lots for charter buses and a peak rush hour schedule plan for the city’s Metro system, most cars and buses are unlikely to be allowed to enter the city, let alone the designated two-mile security zone around the swearing-in site.

END_OF_DOCUMENT_TOKEN_TO_BE_REPLACED 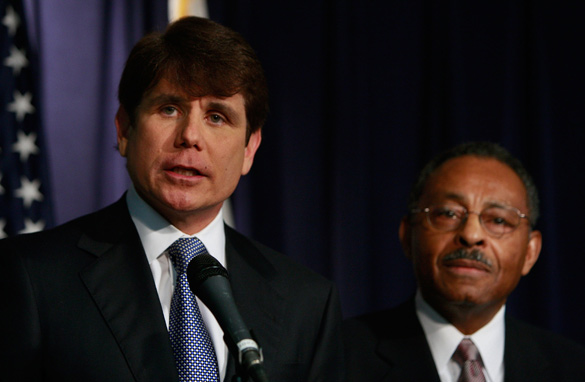 The officials said this has nothing to do with Burris, an African-American leader and former state attorney general: "anyone appointed by Gov. Blagojevich can not be an effective representative of Illinois and will not be seated by the Democratic caucus," said one.

A spokesman for President-elect Obama says the transition has no comment on this. But they note Obama has previously called on the governor to resign.

UPDATE: Senate Democratic leadership released a statement saying Blagojevich's appointment of Burris was "unfair to the people of Illinois and it will ultimately not stand."

(Full statement as released after the jump)