Obama: 'I choked up'

[cnn-photo-caption image= http://i2.cdn.turner.com/cnn/2009/images/01/04/art.bodepart0104.gi.jpg caption="President-elect Obama told reporters he got a little emotion Sunday as he left Chicago to move to Washington."]
(CNN) – President-elect Barack Obama showed a little of his softer side as he said his goodbyes to Chicago, the city that launched his political career, and headed to Washington to join his wife and two daughters.

“I choked up a little bit leaving my house today,” Obama told reporters as his flight prepared to depart.

The moment was brought on by a reminder of the years Obama and his family spent in the Windy City.

The president-elect told his traveling press corps that he got emotional because a friend of his oldest daughter, Malia, had dropped off a scrapbook of pictures to the Obama’s Chicago home.

“They had been friends since preschool and I just looked through the pages and the house was empty and it was a little tough,” Obama said. “It got me.”

The president-elect did not linger long enough to take any questions from reporters. Instead, he returned to his cabin in the aircraft where he ordered a cheeseburger and fries, according to Obama spokesman Robert Gibbs.

“I am looking forward to seeing you guys in Washington,” Obama also told reporters before they boarded the plane.

Kaine will serve on a part-time basis until his term as governor expires, the officials said.

Leading Democrat: Bush 'the worst president we've ever had'

[cnn-photo-caption image= http://i2.cdn.turner.com/cnn/2009/images/01/04/art.reidbush0104.gi.jpg caption="Sen. Harry Reid, pictured here with Pres. Bush in an April 2008 file photo, stood by his persistent criticism of the 43rd president in an interview Sunday."]

WASHINGTON (CNN) – As the nation prepares for the inauguration of President-elect Barack Obama, a leading Democrat is not letting up in his criticism of President George W. Bush.

“I really do believe President Bush is the worst president we’ve ever had,” Senate Majority Leader Harry Reid said Sunday on NBC’s “Meet the Press.”

Reid pointed to Bush’s failed plan to privatize the Social Security program and also said Bush “has done his very best to destroy Medicare” in order support his assessment of Bush’s presidency.

Asked by David Gregory if he had any regrets about his persistent criticism of Bush, Reid responded, “I am who I am.”

“I think you just have to call things the way you see them.”

MN board to certify Franken's win in tight senate race

[cnn-photo-caption image= http://i2.cdn.turner.com/cnn/2009/images/01/04/art.mnrecount0104.gi.jpg caption="CNN has learned that a state board in Minnesota overseeing a recount in the razor-thin Senate race will declare Democrat Al Franken the winner Monday."]
MINNEAPOLIS, Minnesota (CNN) - A state election board on Monday will announce Democrat Al Franken as the winner of the Minnesota Senate race, defeating Republican incumbant Norm Coleman, state officials told CNN Sunday.

Secretary of State Mark Ritchie told CNN the canvassing board on Monday will confirm that Franken won the race by a 225-vote margin.

Deputy Secretary of State Jim Gelbmann oversaw the tallying of roughly 950 improperly rejected absentee ballots Saturday, which was the last remaining hurdle in the canvassing board's procedure. He said no outstanding challenges remain and that the only thing left for the board to do Monday is certify the numbers. Their meeting will convene at 2:30 p.m. (3:30 p.m. ET).

[cnn-photo-caption image= http://i2.cdn.turner.com/cnn/2009/images/01/04/art.getty.jeb.georgehw.jpg caption="Former President George H. W. Bush says son, Jeb, possesses all the qualities necessary to win the White House."]
WASHINGTON (CNN) - His son hasn’t left the White House yet, but former president George H. W. Bush is already thinking about the next Bush who might one day move in. The elder Bush says his oldest son, former Florida Gov. Jeb Bush, has all the qualities necessary to occupy the Oval Office.

However, the senior Bush acknowledged, “Right now is probably a bad time, because we've got enough Bushes in there.”

In the meantime, the former president suggested his son would make an “outstanding senator” because Jeb “really has a feel for people, the issues in Florida and nationally, and his political days ought not to be over, says his old father.”

The current President Bush agrees, openly saying he would like to see his brother run for the Florida Senate seat, replacing outgoing Republican incumbent Mel Martinez in 2010.

Related: Reid on his plan to deal with Burris

Confronted with a recent report from the Chicago Sun Times that he spoke with Illinois Gov. Blagojevich and suggested that Blagojevich pass over three African-American men and instead consider naming one of two Caucasian women, Reid essentially called the embattled governor a liar.

“This is part of Blagojevich’s cloud,” Reid said in an interview Sunday. “He’s making all this up,” Reid added. “I didn’t tell him who not to appoint.”

END_OF_DOCUMENT_TOKEN_TO_BE_REPLACED

[cnn-photo-caption image= http://i2.cdn.turner.com/cnn/2009/images/01/04/art.getty.air.force.two.jpg caption="President-elect Barack Obama is now flying a U.S. military 757 like the one pictured above."]
CHICAGO (CNN) - In a sign of just how close he is to formally taking the reigns of power, President-elect Barack Obama is no longer flying commercial.

Reporters arriving at Midway Airport for Mr. Obama's afternoon flight to Washington were greeted by an Air Force 757 with a crew wearing jackets that say "Air Force One" in script on the front.

Obama aides say this is the first time as President-elect that he is flying a military jet that is in the rotation to be used as Air Force One, though it is technically never called "Air Force One" unless the current president is flying on it.

The transition team chartered a plane from United Airlines for the President-elect's recent holiday vacation to Hawaii, so Sunday's flight marks yet another sign of the transfer of power.

Layne Hoppman, an Air Force security official, said the plane Mr. Obama is flying Sunday is used as Air Force One when one of the two planes currently at President Bush's disposal is in service.

END_OF_DOCUMENT_TOKEN_TO_BE_REPLACED 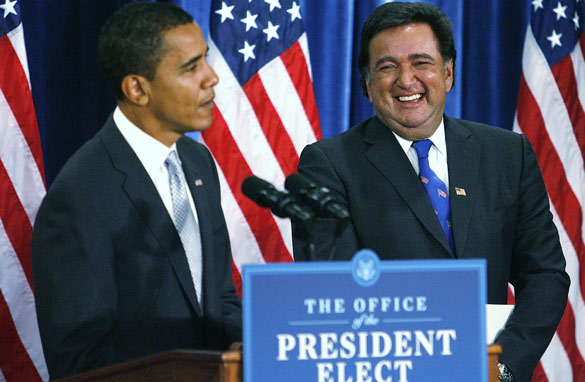 The Democratic officials said Richardson cited the distraction of a federal investigation into his ties to a California company that won municipal bond business in New Mexico after contributing money to various Richardson causes.

Richardson, one of the best-known Hispanics in the Democratic Party, served as the energy secretary in the Clinton administration as well as ambassador to the United Nations.

(Full statements from Obama and Richardson after the jump)

END_OF_DOCUMENT_TOKEN_TO_BE_REPLACED

[cnn-photo-caption image= http://i2.cdn.turner.com/cnn/2009/images/01/04/art.getty.mcconnell.jpg caption="Mitch McConnell wants a Republican voice in the economic stimulus package President-elect Obama hopes to pass after he is sworn into office."]
WASHINGTON (CNN) - Senate Minority Leader Mitch McConnell told CNN what he hopes to get out of the Senate and House bipartisan leadership meeting with Obama on Monday, after his appearance on ABC’s ‘This Week with George Stephanopoulos.”

The most powerful Republican in the Senate wants the president-elect to give Republicans more of a voice in regards to the stimulus package. He proposed an immediate 10 percent tax cut for the middle-class, and financial help to states in the form of loans rather than grants.

“We ought to pass, in my view, an immediate tax relief for the middle class. This is something that I think there will be bipartisan agreement on. Currently the middle class tax rate is 25 percent. I think it ought to be brought down to 15.”

Regarding state assistance, the Kentucky senator proposed the same approach used in the financial rescue package to bail out financial institutions on the verge of bankruptcy.

END_OF_DOCUMENT_TOKEN_TO_BE_REPLACED

[cnn-photo-caption image= http://i2.cdn.turner.com/cnn/2009/images/01/04/art.terryvid0104.yt.jpg caption="Terry McAuliffe, a longtime aide to the Clintons, made an announcement about his own political future in an online video released Saturday evening."]
WASHINGTON (CNN) – After years at the side of Bill and Hillary Clinton, Terry McAuliffe told supporters Saturday night that he intends to run for Virginia’s highest political office.

“On January 7, I will announce my candidacy for the governor of Virginia,” McAuliffe said in a video e-mailed Saturday evening and posted on terrymcauliffe.com.

“As governor, I’ll make it my job to protect your job, grow this economy, make Virginia a leader in renewable energy, focus on long term transportation solutions, and give our children the best education so they have a chance to pursue the American dream right here in Virginia,” McAuliffe says as he looks directly at the camera.

Striking a theme reminiscent of President-elect Barack Obama’s presidential campaign, McAuliffe told supporters, “When it comes to fixing our economy, there’s no such thing as a Republican job or a Democratic job.”

“It’s about bringing people together create good jobs. That’s the kind of leadership I believe in.” he added.

The formal announcement of McAuliffe’s candidacy has been expected for some time. McAuliffe, a longtime aide of both former President Bill Clinton and Sen. Hillary Clinton, most recently served as the national chairman of Hillary Clinton’s presidential campaign.