Reporter's Notebook: For Obama, emotions give way to reality 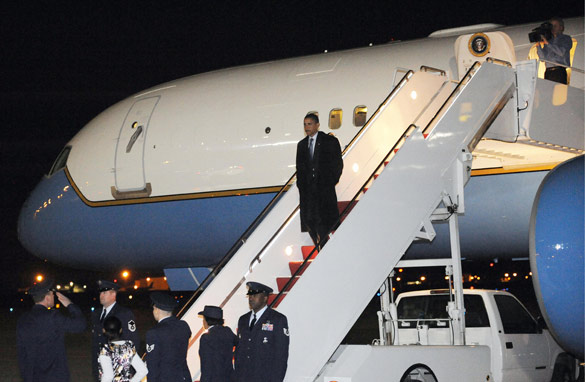 President-elect Obama flew on a U.S. military aircraft for the first time for his trip to Washington Sunday night and was greeted with the trappings of his upcoming status as the country's next commander-in-chief. (Getty Images)

WASHINGTON (CNN) - He arrived here for his new job feeling a bit melancholy about the move from Chicago, but President-elect Barack Obama has little time to mull over his emotions - he's been immediately hit with the sobering realities of the task ahead.

There's the still-unfolding war in Gaza, a fresh reminder of the monumental national security crises ahead. And then the political challenges here at home, starting with two so-called "pay-to-play" scandals - Bill Richardson out as the Secretary of Commerce nominee, and Illinois Gov. Rod Blagojevich still causing heartburn with his selection of Roland Burris to replace the President-elect in the Senate.

In other words, the candidate of "change" is dealing with unexpected change that keeps popping up, threatening to throw him off stride. But he signaled Monday in the first of a series of meetings on Capitol Hill that he intends to stay focused on his economic recovery plan, with aides signaling that he plans to sweeten it with a bigger-than-expected tax cut for individuals and businesses in the neighborhood of $300 billion.

"The reason we're here today is the peoples' business can't wait," Obama said. "We have an extraordinary economic challenge ahead of us."

That poise stands in stark contrast to the emotional Obama I got an up-close look at while flying on his plane from Chicago to Andrews Air Force Base in Maryland on Sunday evening. It was bitter cold on the tarmac at Midway Airport, but he did not seem to be in any rush to board the plane. He was lingering with friends, hugging and saying his good-byes.

Related: 'I choked up,' Obama said

But then the President-elect looked up and saw a massive Air Force jet from the presidential fleet waiting for him, with a crew wearing jackets that say "Air Force One" in script on the front.

As a reporter, it's one of those little moments that can signify a big shift. In this case, it was a sign of just how close the President-elect is to formally taking the reigns of power in one of the most dramatic transfers of power America has ever seen. So long to the chartered jets from United Airlines that took the President-elect to Hawaii - or the commercial flights the rest of us endure - for the next four years he'll be riding that big bird known simply as Air Force One.

Technically it's never called "Air Force One" unless the sitting leader is flying on it, but top Obama aides acknowledged that the enormity of it all was finally sinking in as they flew aboard the jet. "It's a little clearer now," incoming White House Press Secretary Robert Gibbs said, looking around the grand interior of the Air Force jet with a smile. "Nice digs."

The President-elect finally ran up the steps of the plane and peeked back at us on the tarmac. "See you in DC!" he shouted, which seemed like a signal that he would not be coming to the back of the plane later to visit with the press corps during the flight.

But then as we took our seats, the President-elect appeared in the press cabin to talk briefly about how he got "choked up a little bit" as he walked through his Chicago home one last time Sunday afternoon before heading to Washington. His wife Michelle and two daughters, Sasha and Malia, had already made it to the nation's capital so the house must have been eerily empty.

"What happened was Malia's friend dropped off an album of the two of them together," he said. "They've been friends since pre-school and I just looked through the pages. And the house was empty. It was a little tough. It got me."

But the flight itself was pretty enjoyable for the President-elect. Aides said he ordered a cheeseburger and fries - he can apparently afford to do that after all those visits to the gym to workout. And then he watched the football game between the Philadelphia Eagles and Minnesota Vikings.

A little down time before before tackling the looming challenges ahead.