Sources: Voinovich to retire from Senate

[cnn-photo-caption image=http://i2.cdn.turner.com/cnn/2009/images/01/11/art.voinovich.gi.jpg caption="Sources say Sen. George Voinovich, a Republican from Ohio, will retire from the Senate."]

WASHINGTON (CNN) - Sources close to Sen. George Voinovich, R-Ohio, tell CNN he will announce Monday he is retiring from the Senate.

The 72-year-old senator and former Ohio governor has been contemplating retirement for a while but made his final decision this weekend in Florida, where he was joined by his wife, children and grandchildren, according to one of the sources.

Voinovich plans to serve out his term, which expires in 2010.

He plans to make the announcement at 4 p.m. ET Monday in Washington, the source said.

Voinovich will be the fourth Republican senator to announce he will not run for re-election in 2010. Sen. Kit Bond, R-Missouri, said late last week that we would retire, joining Sen. Mel Martinez, R-Florida, and Sen. Sam Brownback, R-Kansas, who had already announced they would leave Capitol Hill when their terms end at the close of the 111th Congress.

Republicans must defend 15 incumbents and four open seats in 2010. (Sen. Kay Bailey Hutchison, R-Texas, whose term is not up until 2012, is seriously considering a 2010 gubernatorial bid and could also be vacating her seat early).

Meanwhile, Democrats have to defend 15 incumbents and two seats where special elections are expected to be held. In Delaware, a special election will be scheduled for Vice President-elect Joe Biden's seat as well as a special election in New York should Hillary Clinton be confirmed as the next Secretary of State.

Burris' fate could be decided Monday

[cnn-photo-caption image=http://i2.cdn.turner.com/cnn/2009/images/01/11/art.burristestifies.gi.jpg caption="Senate-appointee Roland Burris' fate could be decided on Monday."]
WASHINGTON (CNN) - The fate of Senate-appointee Roland Burris could be decided as soon as Monday, Democratic sources said, as the Senate's Parliamentarian and legal counsel worked over the weekend deciphering Senate rules to determine if Burris has met the requirements for admittance.

Illinois Secretary of State Jesse White cleared the main road block to Burris' appointment by submitting a new document to the Secretary of the Senate on Friday that contained both his signature and the official seal of Illinois, two elements which were missing from the official letter of appointment by Gov. Rod Blagovich, a Democrat, in December.

The new letter was also submitted in conjunction with a revised version of Blagojevich's original certificate of appoint. The date of the revised certificate was changed to January 09, 2009 and the space for White's signature was removed.

Sen. Dick Durbin, currently the lone Senator from Illinois, told reporters on Sunday, "This thing changes by the day."

END_OF_DOCUMENT_TOKEN_TO_BE_REPLACED

[cnn-photo-caption image=http://i2.cdn.turner.com/cnn/2009/images/01/11/art.lamen.cnn.jpg caption="Fadel Lamen is among the nearly 350,000 people to apply for jobs in the Obama administration."]

WASHINGTON (CNN) - Over 350,000 and counting. That's how many people the Obama transition team says have submitted resumes online hoping to land a job with the incoming administration. The problem is there are only an estimated 3,000 to 4,000 jobs available at this time.

Some federal employment specialists say the record number of applicants can be attributed in part to the current state of the economy. "A lot of people want to work in a stable environment," said Kathryn Troutman, founder of The Resume Place. "They really don't know where else to go to look for a job that's stable and steady and would have potential, so I think the economy is one thing."

But the appeal of working for Barack Obama is also driving interest, Troutman said.

That's the reason why Loryn Wilson uploaded her resume on change.gov. "I definitely feel the call to serve and to do something that is directly related to causes I care about, she said.

Wilson is a recent graduate of George Washington University in Washington. She has a bachelors degree in English and speaks enthusiastically of working for the new President. "I would actually like to work for the press secretary or the communications director. Ideally I'd be working on the White House side or maybe working for Michelle Obama in her communications shop."

The flood of applicants aren't just college graduates. People at various stages of their professional lives are taking a long hard look at federal jobs.

Fadel Lamen is a seasoned professional who specializes in Middle East affairs.

[cnn-photo-caption image=http://i2.cdn.turner.com/cnn/2009/images/01/11/art.sharonwatkins.disciplesorg.jpg caption="Rev. Sharon Watkins has been selected to lead the sermon at the inaugural National Prayer Service."]

(CNN) - Rev. Sharon Watkins will deliver the sermon at the traditional National Prayer Service on January 21 - a day after Barack Obama is sworn in as president, the Presidential Inaugural Committee announced Sunday.

Watkins - the general minister and president of the 700,000-member Christian Church (Disciples of Christ) - will be the first woman to deliver the sermon at the traditional inaugural event, which takes place at the National Cathedral in northwest Washington, D.C.

"I am truly honored to speak at this historic occasion. ... I hope that my message will call us to believe in something bigger than ourselves and remind us to reach out to all of our neighbors to build communities of possibility," she said in a press release.

The National Prayer Service, according to the inaugural committee, is a a tradition dating back to the nation's first president. The service includes prayers and hymns delivered by various religious leaders.

[cnn-photo-caption image=http://i2.cdn.turner.com/cnn/2009/images/01/11/art.cheneyexclusive.cnn.jpg caption="Vice President Dick Cheney defends his administration's handling of the nation's financial crisis."]
WASHINGTON (CNN) - Appearing Sunday on the last broadcast of CNN's Late Edition, Vice President Dick Cheney defended the administration's handling of the recession and argued that its premature to call it the worst economic crisis since the Great Depression.

"I can't say that. I don't think we know that yet. I think certainly if you look at some earlier periods in our history, I remember back in the late '70s when we had a high rate of inflation, stagflation in effect and a high rate of unemployment," Cheney said.

He added, "We've had some difficult times. Is it the worst since World War II? I can't say that. I don't believe the data shows that yet but it is clearly a serious recession."

The vice president also defended the administration against criticism that it has backtracked on its principles by providing hundreds of billions of dollars to the private sector after previously lambasting the involvement of 'big government' in the economy.

"When the financial system is threatened, only the federal government can fix it and that's what we've been doing," he said. "So even though I'm a conservative, I feel very strongly that we did the right thing by getting active and involved when we did."

END_OF_DOCUMENT_TOKEN_TO_BE_REPLACED

[cnn-photo-caption image=http://i2.cdn.turner.com/cnn/2009/POLITICS/01/09/obama.oath/art.obama.grab.cnn.jpg caption="Obama says the Israel-Gaza conflict has led him to ramp up peace negotiations in the Middle East."]
(CNN) - President-elect Barack Obama said Sunday the suffering on both sides of Gaza's borders has led him to ramp up his commitment to working for a peace deal in the Middle East.

"When you see civilians, whether Palestinian or Israeli, harmed, under hardship, it's heartbreaking. And obviously what that does is it makes me much
more determined to try to break a deadlock that has gone on for decades now," he told ABC's "This Week."

Rejecting criticism for being relatively quiet on the violence in Gaza, Obama said he believes "the principle of one president at a time has to hold is when it comes to foreign policy. We cannot have two administrations at the same time simultaneously sending signals in a volatile situation.

"But what I am doing right now is putting together the team so that on January 20th, starting on day one, we have the best possible people who are going to be immediately engaged in the Middle East peace process as a whole, that are going to be engaging with all of the actors there, that will work to create a strategic approach that ensures that both Israelis and Palestinians can meet their aspirations," he said.

Asked whether he will be building on President Bush's policy toward the region or offering "a clean break," Obama responded: "I think that if you look
not just at the Bush administration, but also what happened under the Clinton administration, you are seeing the general outlines of an approach. And I think
that players in the region understand the compromises that are going to need to be made."

Dealing with Iran, Obama said, will be "one of our biggest challenges ... Not only is Iran exporting terrorism through Hamas, through Hezbollah, but they are pursuing a nuclear weapon that could potentially trigger a nuclear arms race in the Middle East."

END_OF_DOCUMENT_TOKEN_TO_BE_REPLACED

WASHINGTON (CNN) - Picking the first dog is harder than it seems - but it the race could be narrowing down.

President-elect Barack Obama said in an interview Sunday on ABC's "This Week" that choosing the right dog is harder than selecting a Cabinet member.

"We're closing in on it. This has been tougher than finding a commerce secretary," Obama told George Stephanopoulos.

The hotly debated dog question, Stephanopoulos admitted, was submitted by the future first daughters - Sasha and Malia - before the show, which is broadcast from the Newseum.

"I heard they were taken straight to the first dog exhibit and while you were getting made up, they went into the control room and played director and producer," Stephanopoulos said. "And they actually gave me a question they want me to ask you. You know exactly what it's going to be."

"They seem to have narrowed it down to a Labradoodle or a Portuguese water hound," he said. "Medium sized dog, and so, we're now going to start looking at shelters to see when one of those dogs might come up."

The little inauguration band that could 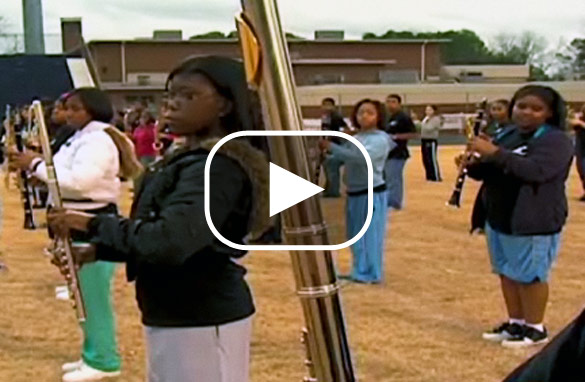 (CNN) - CNN's Brooke Baldwin reports on a suburban Atlanta high school band that will march in the presidential inauguration.