[cnn-photo-caption image= http://i2.cdn.turner.com/cnn/2009/images/01/13/art.huckpt0113.gi.jpg caption="Former GOP presidential candidate Mike Huckabee was both sympathetic and critical of Alaska Gov. Sarah Palin."]
(CNN) - Sarah Palin has complained repeatedly that she was given unfair treatment by the media during her rapid political ascent last year.

But Mike Huckabee – a potential rival for Palin in 2012 should they both decide to seek the White House – apparently doesn’t agree.

In an interview in the current issue of Esquire, Huckabee speaks sympathetically of Palin, saying she had been subjected to “sexist things that would never have been asked of a male candidate.”

But he pushed back against Palin’s assertion that high-profile journalists – particularly Katie Couric of CBS – were biased in their interviews with her.

“Now I must say I did not think that either the Charlie Gibson interview or the Katie Couric interviews were unfair,” Huckabee said. “In fact, if anything, Katie Couric was extraordinarily gentle, even helpful. [Palin] just ... I don't know what happened. I can’t explain it. It was not a good interview. I’m being charitable.”

Since losing his bid for the GOP nomination last year, Mike Huckabee hasn’t been shy about criticizing some of the politicians he might face in a 2012 Republican primary battle – but Mitt Romney has remained his favorite target. In his new book, Huckabee wrote that Romney was "anything but conservative until he changed the light bulbs in his chandelier in time to run for president.”

END_OF_DOCUMENT_TOKEN_TO_BE_REPLACED

Barbour's endorsement - confirmed by Dawson's campaign - is notable because his uncle, now the governor of Mississippi, caught the attention of RNC members last week when he suggested Republicans should avoid tapping a Southerner to helm the party.

"There are some people that want to attack us as being too southern," Haley Barbour told USA Today on Jan. 5. "I don't think we ought to make it easier for them to do that."

Along with Dawson, southerners Chip Saltsman (Tennessee) and Mike Duncan (Kentucky) are seeking the RNC post.

Dawson also nabbed the backing of longtime New Jersey committee member David Norcross, who said he was initially hesitant to offer his support to a southerner, but changed his mind after examining Dawson’s record of winning statewide races in South Carolina.

Norcross said it's important to have a chairman "who comes from the strongest region for our party, who is willing to offer a hand to the northeast and the mountain west." New Jersey's other two members - state chair Tom Wilson and committeewoman Virginia Haines - have endorsed Michigan GOP chairman Saul Anuzis.

Dawson wasn’t the only RNC member to pick up support Tuesday.

END_OF_DOCUMENT_TOKEN_TO_BE_REPLACED

In an interview with CNN's "Larry King Live," scheduled to air 9 p.m. Tuesday, King and Bush discussed Obama's predictions for a bad year ahead for the U.S. economy.

"He'll learn not to become an economic forecaster once he gets to be president," Bush said, agreeing that 2009 will likely be a hard year.

"That's not a good idea to say?" King asked the outgoing president.

Watch: Bush fights back at critics

"I don't think so. I think he can say it's going to be a tough period but to predict what the economy is going to do ... it is going to be bad, but how bad, how long?" Bush responded.

"What he ought to be saying, and I know he feels this way, is he's going to take the steps he thinks are necessary to get us back on the road to recovery and we will recover."

Bush said he liked Obama and was looking forward to his inauguration, where he will have a "front row seat" to an historic moment in the country's history.

But first lady Laura Bush said she took some of Obama's critiques of her husband personally.

"Were you angry at it?" King asked.

"So what's new?" Bush piped in. "When you make big decisions and tough calls, you're going to get criticized."

"The President-elect chose Tim Geithner to be his Treasury Secretary because he's the right person to help lead our economic recovery during these challenging times," Obama spokesman Robert Gibbs said in a statement. "He's dedicated his career to our country and served with honor, intelligence and distinction."

According the Wall Street Journal, Republican Sen. Chuck Grassley - the ranking Republican on the Senate Finance Committee - raised questions Tuesday about the status of a housekeeper who briefly worked for Geithner.

Geithner himself also reportedly didn't pay Social Security or Medicare taxes for "multiple years," according to the Wall Street Journal.

In his statement, Gibbs said Geithner made a "common mistake on his taxes, and was unaware that his part-time housekeeper's work authorization expired for the last three months of her employment.

"We hope that the Senate will confirm him with strong bipartisan support so that he can begin the important work of the country," Gibbs also said.

UPDATE: The Senate Finance Committee has released a document confirming Geithner failed to pay self employment taxes and employed a housekeeper whose authorization had expired.

According to the Obama transition team, transition officials discovered the problem on November 21, and notified the Senate Finance Committee soon after.  The committee's release says members were informed of the problem on December 5.

MORRELL: Good afternoon. Pleasure to see you all today.

I have just a few announcements, and then I'll gladly take your questions.

First, Secretary Gates very much appreciates the Senate Armed Services Committee quickly arranging hearings this Thursday for the first four people nominated to serve in this department under President Obama.

As you know, last week the president-elect nominated Bill Lynn to be the deputy defense secretary; Michelle Obama for undersecretary of defense for policy...

MORRELL: Excuse me. Thank you for...

WASHINGTON (CNN) - The Senate chairman who will preside over the potentially bumpy confirmation hearings of Attorney General-designate Eric Holder continued his public campaign on Holder's behalf Tuesday by producing two prominent Republicans who back his confirmation.

At the heart of that issue is Holder's decision to acquiesce to the White House when President Bill Clinton granted a controversial pardon to fugitive Marc Rich in the final hours of Clinton's presidency.

END_OF_DOCUMENT_TOKEN_TO_BE_REPLACED

In an interview with the Monday Morning Clacker blog, McCain discussed her love for burlesque queen Dita Von Teese, calling her “spectacular… everything she does is genius. Her book still sits on my coffee table.”

She also said she was “inspired by Bikers For McCain and want[s] to go back to Sturgis next year and do bike week right.”

But she wouldn’t be drawn into any assessment of Arizona Sen. John McCain’s vice presidential pick. “Sarah Palin is the only part of the campaign that I won’t comment on publicly,” she said.

END_OF_DOCUMENT_TOKEN_TO_BE_REPLACED

[cnn-photo-caption image= http://i2.cdn.turner.com/cnn/2009/images/01/13/art.hrchand0113.gi.jpg caption="Sen. Clinton was questioned Tuesday about the Clinton Foundation and the Clinton Global Initiative."]
WASHINGTON (CNN) - During her confirmation hearing Tuesday before the Senate Foreign Relations Committee, Sen. Hillary Clinton refused to commit to extending an existing memorandum of understanding (MoU) to cover contributors to her husband's Clinton Global Initiative.

Clinton asserted that government ethics officials have concluded under "well-established" rules that "there is not an inherent conflict of interest" for her in any of former President Bill Clinton's fundraising or other business dealings.

Clinton stated that her husband had already gone beyond what was legally required by signing a MoU to fully disclose donations to the Clinton Foundation.

While admitting that extending the MoU to the Clinton Global Initiative is not required by law, Louisiana GOP Sen. David Vitter asserted that "a lot of real and perceived conflict issues" arise from the work of the group, particularly relating to certain contributors from the Middle East.

Clinton responded that while the MoU would not be amended to cover the work of the Initiative, she was trying to address all questions about potential conflicts of interest in a "transparent manner" and there would be "ongoing reviews" of the Clinton Global Initiative's activities.

The initiative wasn't included in the original MoU because it has always disclosed the names of its donors, Clinton noted.

She also refused to agree to a request by Sen. Richard Lugar, an Indiana Republican, to have the Clinton Foundation reject donations from foreign governments during her tenure as secretary of state.

END_OF_DOCUMENT_TOKEN_TO_BE_REPLACED 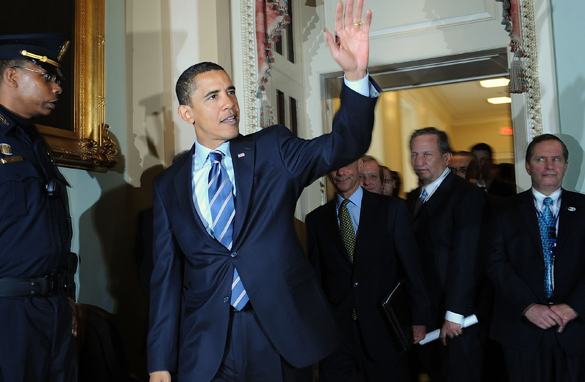 END_OF_DOCUMENT_TOKEN_TO_BE_REPLACED

[cnn-photo-caption image= http://i2.cdn.turner.com/cnn/2009/images/01/13/art.bushmission.gi.jpg caption="Bush delivered a speech on board the USS Abraham Lincoln in 2003."]

(CNN) - It's a moment President Bush has repeatedly called a mistake: Delivering a speech on board the USS Abraham Lincoln in the Spring of 2003 with a "Mission Accomplished" banner featured prominently behind him.

But the much-maligned photo-op wasn't the president's fault at all, according to former White House Communications Director Dan Bartlett.

Bartlett, currently a political analyst with CBS, said Tuesday he was the one who actually  gave the final go-ahead of the event.

"Quite frankly, yours truly was the guy who actually signed off," he said Tuesday. "I regret it to this day, because it did send the wrong message."

In his final press conference Monday, Bush immediately cited the moment when asked by a reporter what mistakes he had made over the last eight years.

"Clearly, putting a 'mission accomplished' on an aircraft carrier was a mistake," he said. "We were trying to say something differently but, nevertheless, it conveyed a different message."

Bush has also previously defended the banner as pertaining to the mission of the crew on board the Aircraft carrier, not the Iraqi invasion as a whole.