[cnn-photo-caption image= http://i2.cdn.turner.com/cnn/2009/POLITICS/01/13/transition.wrap/art.obama.gi.jpg caption=" Barack Obama met with Senate Democrats for the last time before next week's inauguration."](CNN) - President-elect Barack Obama went to Capitol Hill on Tuesday to meet with Senate Democrats and make his case for how he wants to spend the second half of the $700 billion bailout.

Obama attended the weekly lunch of Democratic senators in what was his final visit to the Senate before his inauguration next week, according to the transition team. He also had been expected to push for his economic stimulus plan.

Obama has been making phone calls to senators asking for their support.

Some Republicans and Democrats said they were upset by how the Treasury Department spent the first allotment of $350 billion.

[cnn-photo-caption image= http://i2.cdn.turner.com/cnn/2008/images/12/08/art.palinop.gi.jpg caption="Palin has given a steady stream of interviews since Election Day."](CNN) - Sarah Palin fired a new salvo in her war on the media, unloading in a new interview on her home state paper and “bored, anonymous, pathetic bloggers who lie.”

The Alaska governor, who has granted a steady stream of interviews since Election Day, also told an Esquire reporter that she wishes she had told McCain campaign advisors she’d be “callin’ some of the shots.”

"Bored, anonymous, pathetic bloggers who lie annoy me....I'll tell you, yesterday the Anchorage Daily News, they called again to ask — double-, triple-, quadruple-check — who is Trig's real mom,” she said, in an interview to be published in the magazine’s March issue.

“And I said, Come on, are you kidding me? We're gonna answer this? Do you not believe me or my doctor? And they said, No, it's been quite cryptic the way that my son's birth has been discussed. And I thought, Okay, more indication of continued problems in the world of journalism."

END_OF_DOCUMENT_TOKEN_TO_BE_REPLACED

[cnn-photo-caption image= http://i2.cdn.turner.com/cnn/2009/images/01/13/art.bideniraq0113.gi.jpg caption="Vice President-elect Biden is meeting with Iraqi officials during a congressional trip overseas."]
BAGHDAD, Iraq (CNN) - BAGHDAD, Iraq (CNN) - U.S. Vice President-elect Joe Biden continued his visit to war-ravaged Iraq on Tuesday, but got an earful from one of his counterparts about another regional conflict - the war in Gaza between Israel and Hamas.

"The new administration's reputation is on the line because of President-elect Obama's silence," al-Hashimi said in a statement issued by his office. "This after his stance following the Mumbai events."

Obama issued a strong condemnation of the attacks in the Indian city of Mumbai in November.

END_OF_DOCUMENT_TOKEN_TO_BE_REPLACED

Posted by
From CNNMoney.com's Chris Isidore

Bernanke, speaking in London, said in his prepared remarks that the nearly $800 billion plan being discussed by the incoming Obama administration and the newly elected Congress "could provide a significant boost to economic activity." He did not comment on or endorse any specifics of the nearly $800 billion.

But Bernanke cautioned that the plan is "unlikely to promote a lasting recovery unless they are accompanied by strong measures to further stabilize and strengthen the financial system."

[cnn-photo-caption image= http://i2.cdn.turner.com/cnn/2009/images/01/04/art.terryvid0104.yt.jpg caption="Terry McAuliffe, a longtime aide to the Clintons, made an announcement about his own political future in an online video."]WASHINGTON (CNN) - Former Democratic National Committee chairman Terry McAuliffe is flexing his fundraising muscle in the Virginia governor's race.

McAuliffe, who began seeking for the commonwealth's top job last fall but only officially entered the race this month, revealed on Monday that he's raised almost $1 million for his campaign in just six weeks.

It took McAuliffe’s rivals for the Democratic nomination - former state delegate Brian Moran and state senator Creigh Deeds - six months to raise that amount, according to campaign finance reports, and both of them have been running for governor for more than a year. (Both candidates, however, were legally barred from raising money during last winter's two-month legislative session.)

END_OF_DOCUMENT_TOKEN_TO_BE_REPLACED 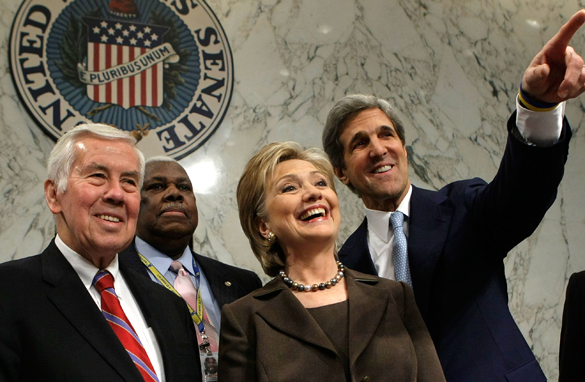 Clinton made her case to be the next secretary of state Tuesday before the Senate Foreign Relations Committee. (Getty Images)

Watch: 'American leadership has been wanting but is still wanted' says Clinton

Clinton's comments came as she appeared before the Senate Foreign Relations Committee for her confirmation hearing for the position of secretary of state.

During her testimony, Clinton said the withdrawal would occur "in the context of the status of forces agreement" that the Bush administration recently signed with the Iraqi government that requires the removal of U.S. combat troops by 2011.

Clinton, however, acknowledging a "difference in timing" with the Iraqis, says the administration hopes to remove U.S. troops from cities and villages by June.

[cnn-photo-caption image= http://i2.cdn.turner.com/cnn/2009/images/01/13/art.schlozman.gi.jpg caption="Bradley Schlozman testified before Congress in 2007."]WASHINGTON (CNN) - A long-awaited Justice Department report on the troubled Civil Rights Division says a politically-motivated former chief of the Division violated a federal hiring law and made false statements to Congress about his controversial hiring practices.

Bradley Schlozman, however, will not be prosecuted. The report says the U.S. Attorney's Office for the District of Columbia decided last week not to prosecute Schlozman for the violations found by investigators for the Inspector General.

The 65-page report by Inspector General Glenn Fine describes Schlozman as a staunch conservative who tried to punish liberal employees within the Civil Rights Division.

END_OF_DOCUMENT_TOKEN_TO_BE_REPLACED

(CNN) - An aide to Bill Clinton says the former president is in Washington watching Hillary Clinton's Senate testimony with mother-in-law Dorothy Rodham, and the family will gather after the hearing is over.

Florida Democrat Rep. Kendrick Meek announced that he is running to fill the Senate seat being vacated by Sen. Mel Martinez in 2010.

“Never in my lifetime have the people of Florida been faced with so many big problems,” Meek said in a statement.

“Change has come to Washington. But it won’t be easy. There will be opposition from many powerful forces who have stopped us before . . . I want to be a fighter for Florida with a strong voice that won’t let the special interests stand in the way of what’s right.”

Meek is currently serving his fourth term in the House of Representatives, and is the son of former Congresswoman Carrie Meek.

Meek is the first Senate hopeful to formally announce a bid to replace Martinez, who said earlier this month will not seek re-election in 2010. Former Florida Gov. Jeb Bush recently announced that he will not run for Martinez’s seat.

"It's too early," the former New York City mayor said on CNN's American Morning Tuesday. "The governor has a big job. He doesn't need a two-year election campaign. I think he should be given every opportunity to do the very best he can for the state, and then we can see about it six months from now, eight months from now."

Two months ago, in an interview on CNN, Giuliani said he wasn't ruling out a bid in 2010 for governor of the Empire State.

A poll of New York State voters conducted by Sienna College in November suggested that Paterson would top Giuliani by 6 points in a hypothetical head-to-head match up in 2010.