[cnn-photo-caption image= http://i2.cdn.turner.com/cnn/2009/images/01/20/sign.jpg caption="The president signed three documents soon after his swearing in Tuesday."]
WASHINGTON (CNN) - As his first official action after being sworn in, President Barack Obama signed three documents Tuesday, including a proclamation declaring a day of national renewal and reconciliation.

"I'm a lefty. Get used to it," Obama quipped as he signed his name. "I was told not to swipe the pen."

The past three presidents signed similar reconciliation proclamations upon being sworn in.

Also signed by Obama were Cabinet and sub-Cabinet nominations. Those nominations will be presented to the Senate when it meets at 3 p.m. Tuesday,
and are necessary before the full Senate can confirm the nominations, according
to Senate staff members.

Bush's last day: Calls, candy and a flight to Midland 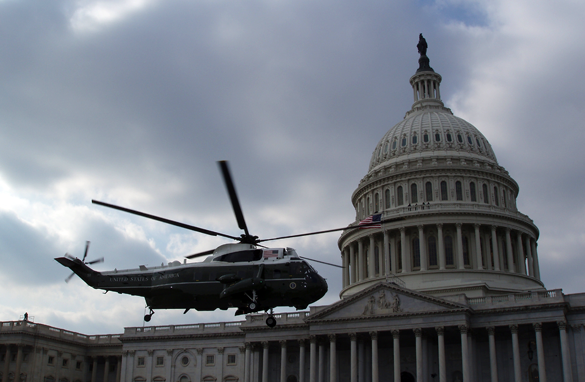 The former president also had a conversation with his good friend the Rev. T.D. Jakes.

Jakes is the chief pastor of the nondenominational megachurch Potter's House in Dallas, Texas. He was in Washington to give a sermon Tuesday at St. John's Church, a short walk from the White House. 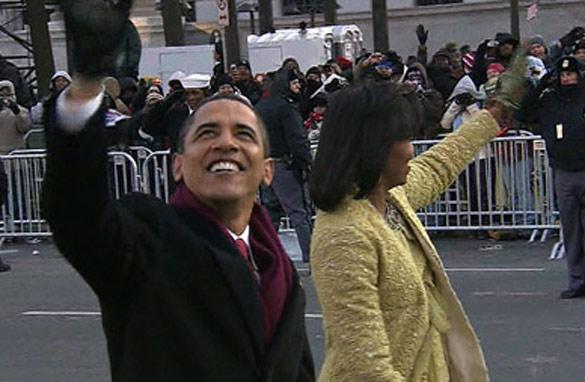 The president and first lady walked for portions of the parade route along Pennsylvania Avenue Tuesday. (Photo Credit: CNN)

WASHINGTON (CNN) - President Obama took to the street for part of his procession from the Capitol to the White House, prompting screams and chants of his names from spectators on the sidelines.

Watch: The president and first lady walk down Penn. Ave.

Obama, first lady Michelle Obama, Vice-President Joe Biden and his wife, Jill, left the limousines they were riding in and walked under heavy security from near the National Archives building to near the Justice Department. They then returned to their vehicles - although Biden climbed back out to walk the street and wave to the crowd again as they neared the White House.

The parade, which runs just under two miles, took Obama from the U.S. Capitol, where he had lunch with congressional leaders, to 1600 Pennsylvania Ave.

“One group is going through their paperwork, the other group has finished paperwork and is now getting up to speed on technology," Gibbs said.

Gibbs said that he is still trying to figure out how to log into his computer.

Peter Orszag was also approved as director of the Office of Management and Budget.

All seven were approved on a single voice vote.

A roll-call vote for Secretary of State-designate Hillary Clinton is expected to be held Wednesday. Clinton's nomination was delayed by a day and forced to a roll call vote because of an objection filed Tuesday by Sen. John Cornyn, R-Texas.

Scenes from the inauguration: A cold crowd waits 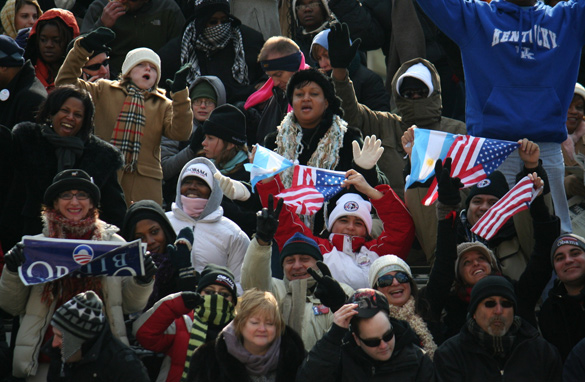 WASHINGTON (CNN) - Hours before the parade started, the stands at the end of the route started filling up with an excited crowd.

The seats, right near where President Obama will sit to watch the parade were treated to an explanation of the day's events by the announcer.

Hours before Obama was scheduled to join them in the presidential reviewing stand, the announcer told them the newly sworn-in president would be eating lunch at the Capitol.

"So while you are freezing, they are having a wonderful time," the announcer joked over the parade route speakers.

Obama calls on lawmakers to join in 'civility and urgency'

[cnn-photo-caption image= http://i2.cdn.turner.com/cnn/2009/images/01/20/art.bomolunch0120.gi.jpg caption="The president and the first lady participated in the tradition lunch on Capitol Hill after the swearing in ceremony."]
WASHINGTON (CNN) - A little more than two hours after taking the oath of office Tuesday, President Barack Obama called on lawmakers to reflect "what we know are in the hearts of the American people."

In brief remarks at a congressional luncheon, the new president echoed his campaign theme, saying, "What's happening today is not about me. It is about the American people. They understand that we have arrived at a moment of great challenge for our nation, a time of peril, but also extraordinary promise.

"And by being here today, and by participating in innumerable ways across cities and small towns, and suburbs all across the country, they are demonstrating the readiness to answer history's call, and to step up and give back and take responsibility for serving the common purpose of remaking our nation."

Americans, Obama said, "have come together across races and regions and stations. Now we have to do the same. Now it falls to us, the people's representatives, to give our fullest measure of devotion to the cause of freedom and liberty and justice, decency, and dignity. And our chambers should reflect what we know are in the hearts of the American people."

END_OF_DOCUMENT_TOKEN_TO_BE_REPLACED

Scenes from the inauguration: Mother and daughters

[cnn-photo-caption image= http://i2.cdn.turner.com/cnn/2009/images/01/20/art.reed1.cnn.jpg caption="Reed brought her daughters to see the inaugural parade."]WASHINGTON (CNN) - A few minutes after Obama spoke, Vanessa Reed reflected on the speech as she sat with her daughters across from the presidential reviewing stand at the end of the parade route.

"It was beautiful. It spoke to the issues of the moment," said Reed, who worked for the campaign. "I am proud this country saw what we saw in him."

Not as impressed: her youngest daughter Brooke.

"It was so boring," said Brooke, 4. Reed said her daughters, Brooke and older daughter Gabrielle, 6, understood the moment.

"They understand it is all a celebration," said Reed, who added that they were really excited about seeing Miley Cyrus at the inaugural concert this weekend.

Paramedics were called to the scene at 2:35 p.m. ET. Kennedy, who appeared to be suffering from a seizure, was transported to Washington Hospital Center.

"Senator Kennedy had a seizure" which "lasted a while," a Republican House member told CNN. The member said Kennedy was still experiencing seizures when he was put in a wheelchair and taken out through the Rayburn room, located to the side of Statuary Hall.

"He looked like he was going to be OK," Hatch said.

Obama mentioned Kennedy's condition while speaking at the luncheon.

Kennedy "was there when the Voting Rights Act passed," the new president said. "Along with John Lewis, (he) was a warrior for justice. And so I would be lying to you if I did not say that right now, a part of me is with him. And I think that's true for all of us. This is a joyous time. But it's also a sobering time, and my prayers are with him and his family and (his wife) Vicki."

Also during the luncheon, Sen. Robert Byrd, D-West Virginia, appeared to be experiencing some difficulty, but Capitol Police spokeswoman Kimberly Schneider said he is fine.

Almost at the instant Obama was sworn in, http://www.whitehouse.gov relaunched with a redesign to signal a new era in government. Gone was the staid site of the Bush White House, replaced by a dynamic new site reflective of his tech savvy successor.

The new design includes more interactive features, a prominent photo gallery displayed across the top of the site, the ability to get e-mail updates, and a White House blog. The site's "briefing room" also includes places for a weekly video address, slide shows, proclamations, and executive orders as well as news about nominations and appointments.

Visitors to the site are invited to e-mail the president and his staff, although - perhaps in a nod to the Twittersphere, where brevity is key - comments are limited to 500 characters.

"President Obama is committed to creating the most open and accessible administration in American history," states the site's Contact Us page.