WASHINGTON (CNN) - Controversial evangelical pastor Rick Warren delivered the inaugural ceremony's invocation on the west front of the Capitol at 11:48 am ET. 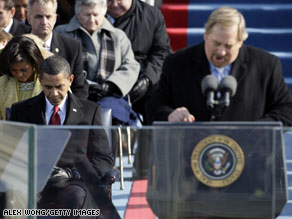 Barack Obama bows his head during the invocation by Rev. Rick Warren.

"Today... we celebrate a hingepoint of history with the inauguration of our first African-American president of the United States," Warren said. "We know today that Dr. King and a great cloud of witnesses are shouting in heaven."

Many liberal activists opposed the choice of Warren to deliver the invocation, largely due to Warren's outspoken opposition to gay marriage.