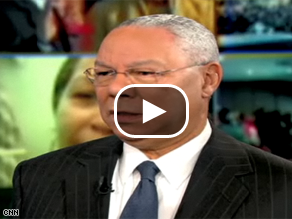 In an interview with American Morning Wednesday, the former Secretary of State under President Bush who endorsed Obama's White House bid earlier this fall, said the economy was the new president's "No. 1 problem."

"The American people I think fundamentally bet on President Obama because of the economic situation we are in," Powell said. "The stock market dropped another 300 points on this glorious Inauguration Day and people are losing jobs, and that will be No. 1 for him."

Powell, who was also Chairman of the Joint Chiefs of Staff and National Security Advisor under President George H.W. Bush, reiterated that he has never held political ambitions of his own, and that his wife was not happy with the idea of political life - both reasons he cited for avoiding a presidential run against then-President Bill Clinton in 1996, despite the urging of many leading Republicans.

"I'm a soldier. I never found inside of me the kind of internal passion that you got to have to run for elected office," he said.