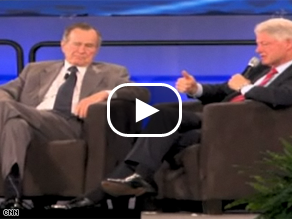 Watch Clinton and Bush 41 name their regrets as president.

(CNN) - Two former presidents reflected on their greatest regrets in office Monday, each looking back to issues that continue to plague the nation years later.

Former Presidents George H.W. Bush and Bill Clinton appeared together at a question-and-answer forum before the National Automobile Dealers Association in New Orleans.

Asked his biggest regret after leaving office, Bush said he now wonders whether he should have tried to get Saddam Hussein to leave office at the end of the first Gulf War in 1991. He told the gathering, "I've thought a lot about it, but at the end of Desert Storm the question was should we have kind of kept going on that road to death and all this slaughter until Saddam Hussein showed up and laid his sword on the table, surrendered. And the common wisdom was he wouldn't do that."

But he said a conversation with an FBI agent who interrogated Saddam after he was captured has made him reconsider. Bush recalled their talk, "I said, what if we just say he has to come to surrender, would he have done it?

And this guy said, I'm absolutely convinced he would have. My experts tell me he wouldn't have."

Bush said, "We ended it the way we said we would" as a military success, but noted a cleaner ending "would have been perfect."

He added, "If we had tried to get Saddam Hussein to come and literally surrender and put his sword on the table, I think it might have been avoided some of the problems that we did have in the future from him."

On a day that President Barack Obama dispatched George Mitchell to the Middle East as the latest U.S. envoy, Clinton discussed the failure to achieve peace between Israelis and Palestinians. He said, "my No. 1 regret is that I was not able to persuade Yasser Arafat to accept the peace plan I offered at the end of my presidency that the Israelis accepted."

He said, "If he had done that ... we had had seven years of progress toward peace. We had one year in 1998, the only year in the history of Israel where not a single soul was killed in a terrorist act. The Palestinians had more control over West Bank then, than they do today. And if he had taken that deal, we would have a Palestinian state and we would have had I think now normal peaceful relations with Israel and all of its Arab neighbors."

Clinton said a deal would have helped the U.S. handle other issues in the region, saying, "We'd be much better positioned to deal with problem of Iran and we would have taken away about half the arguments of terrorists around the world by giving the Palestinians their state and creating a cooperative, positive interdependence in the Middle East, not a negative one. And so, I think that would have done more good to save more lives and help more people, and I wish I had been able to do that. "

Clinton also said he regretted not doing more to "stop the Rwandan genocide," and succeeding on a new health care plan.

He said "presidents should share freely … the mistakes they made" with historians, because it teaches lessons. He said he shared problems during the lunch with Obama and the four living presidents, saying, "You want each new president to make new mistakes, not the same ones."

Clinton added, "all of us know if you make enough decisions, you're going to make a few of them aren't right."