Gates: Ethics reform has a cost

[cnn-photo-caption image= http://i2.cdn.turner.com/cnn/2009/images/01/27/art.gates1.gi.jpg caption="Gates is testifying on the Hill Tuesday."]WASHINGTON (CNN) - Defense Secretary Robert Gates said Tuesday the continued push to make sure administration officials and government employees do not have ties to private industry has a cost - the inability to find experienced people to fill important jobs.

Ethics efforts, at times, mean "we're cutting off our nose to spite our face" in terms of being able to hire qualified people, Gates said as he appeared before the Senate Armed Services Committee.

"Thus, the situation we face today, where a small set of expensive weapons programs has had repeated and unacceptable problems with requirements, schedule costs and performance. The list spans the services," he said.

END_OF_DOCUMENT_TOKEN_TO_BE_REPLACED 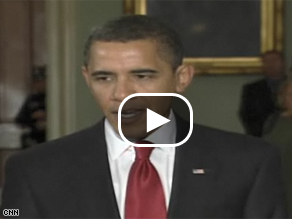 Obama speaks with reporters about his meeting with house Republicans.

"We had a wonderful exchange of ideas, and I continue to be optimistic about our ability to get this recovery package done to put people back to work," Obama said after leaving a meeting with GOP House members.

"There are some legitimate philosophical differences" between Democrats and Republicans on how to stimulate the economy, Obama noted, "and I respect that."

"I don't expect 100 percent agreement," he added. "But I hope we can put politics aside."

Obama is meeting with Republican senators this afternoon.

[cnn-photo-caption image= http://i2.cdn.turner.com/cnn/2009/images/01/27/art.paterson.gi.jpg caption="Paterson's approval ratings have slipped."](CNN)- The perceived chaos surrounding the appointment to fill Secretary of State Hillary Clinton's Senate seat has taken a toll on New York's governor, according to a new poll.

New York Gov. David Paterson's approval rating has slipped 10 points over the last month, and now stands at 44 percent, according to a new survey conducted by Marist College.

END_OF_DOCUMENT_TOKEN_TO_BE_REPLACED

Lt. Gen. Ronald Burgess, the No. 3 official in the DNI's office, will serve as acting director until a new one is confirmed, Feinstein said.

Blair's confirmation hearing was held last week, and the Senate Intelligence Committee is expected to recommend approval as early as Wednesday, sending the nomination to the full Senate for a final vote.

END_OF_DOCUMENT_TOKEN_TO_BE_REPLACED

[cnn-photo-caption image= http://i2.cdn.turner.com/cnn/2009/images/01/27/art.obamaapproval.gi.jpg caption="Obama's early approval ratings are high."]WASHINGTON (CNN) - So far, so good for President Barack Obama, at least in the court of public opinion.

A new national poll suggests that most Americans approve of the way Barack Obama is so far handling his job as President of the United States, the second such post-inauguration poll to give the new president rave reviews.

Sixty-three percent of those questioned in a Diageo/Hotline survey released Tuesday give President Obama the thumbs-up, with 9 percent dissaproving of the way he is handling his duties in the White House.

That 63 percent figure is in the same ballpark as the 68 percent approval rating President Obama scored in a Gallup poll released Saturday. Both surveys were conducted entirely after Obama was inaugurated as president one week ago today.

END_OF_DOCUMENT_TOKEN_TO_BE_REPLACED 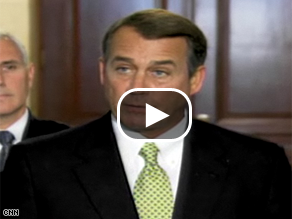 END_OF_DOCUMENT_TOKEN_TO_BE_REPLACED

[cnn-photo-caption image= http://i2.cdn.turner.com/cnn/2009/images/01/27/art.obamahill.gi.jpg caption="Obama is pressing members of Congress to vote for the stimulus bill"]WASHINGTON (CNN) - President Obama is taking a hands-on approach in shaping the $825 billion economic stimulus package under consideration by Congress, urging his fellow Democrats to take out provisions he feels are unnecessary and controversial, according to a senior administration official.

An Obama aide said the President has personally called House Democratic leaders recently to urge them to remove a $200 million family planning provision which would have made it easier for states to use federal funds to provide contraception for poor families.

END_OF_DOCUMENT_TOKEN_TO_BE_REPLACED

Gillibrand sworn in as U.S. senator 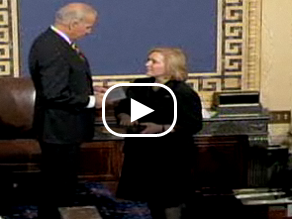 WASHINGTON (CNN) - After serving only two years in the House, former Rep. Kirsten Gillibrand was sworn in as the junior senator from New York Tuesday afternoon.

Her swearing-in concluded a seemingly chaotic selection process that drew criticism from across the political spectrum.

[cnn-photo-caption image= http://i2.cdn.turner.com/cnn/2009/images/01/27/art.live1.cnn.jpg caption="Watch the event on CNN.com/live."]
WASHINGTON (CNN) - Defense Secretary Robert Gates opened his first comments to Congress as President Barack Obama's defense secretary Tuesday with the clear message that Afghanistan is at the top of his to-do list.

"There is little doubt that our greatest military challenge right now is Afghanistan," Gates said in his opening statement before the Senate Armed Services Committee, adding that Obama has made it the top military priority overseas.

Watch the testimony on CNN.com/live

Later, in response to a question from the committee's chairman, Sen. Carl Levin, D-Connecticut, he said missile strikes in Pakistan will continue in an effort to root out al Qaeda members who have based themselves across the border from Afghanistan.

And in one of the clearest indications of the military's planning to add troops in Afghanistan, Gates outlined a deployment of two brigades by spring and a third by late summer.

END_OF_DOCUMENT_TOKEN_TO_BE_REPLACED

[cnn-photo-caption image= http://i2.cdn.turner.com/cnn/2009/images/01/27/art.specter.gi.jpg caption="Specter could announce whether he will support Holder Tuesday."](CNN) - Sen. Arlen Specter, the ranking Republican on the Senate Judiciary Committee, is set to hold a press conference Tuesday on the nomination of Eric Holder, President Obama's choice to be attorney general.

It's likely Specter will announce whether he will vote to confirm Holder when the committee convenes Wednesday.

Specter's decision could significantly affect how many Republicans ultimately vote against one of the president's most controversial cabinet appointments.

The press conference is scheduled for 2:45 p.m. ET.