[cnn-photo-caption image= http://i2.cdn.turner.com/cnn/2009/images/01/30/art.obamafootball.gi.jpg caption=" Obama is rooting for the Pittsburgh Steelers."](CNN) – Democrats and Republicans may cross party lines to join colleagues in rooting for their favorite teams at President Obama’s Super Bowl party on Sunday night.

Obama invited several members of Congress, including a few Republicans, to the White House residence on Sunday night to chow down on chips and dip and watch the game between the Arizona Cardinals and the Pittsburgh Steelers. At the daily press briefing on Friday, White House press secretary Robert Gibbs said this is a way of “bringing people together.”

“He'll have more members of Congress over here Sunday to watch the Super Bowl and, again, reach out to and get to know in a better way members on both sides of the aisle to see where we can work in concert to improve the lives of the American people,” Gibbs said.

Gibbs joked that his deputy, Bill Burton, would provide seven-layer dip. But he said there’s no wagering allowed at this party.

END_OF_DOCUMENT_TOKEN_TO_BE_REPLACED

[cnn-photo-caption image= http://i.l.cnn.net/cnn/2008/images/01/23/art.cepd.cnn.jpg caption="CNN=Politics Daily is The Best Political Podcast from The Best Political Team."](CNN) ––The nation elected its first African-American to lead the country - now the Republican National Committee has elected its first African-American to lead the GOP. What does the new RNC chairman have to say? “This is awesome.” In the latest installment of CNN=Politics Daily, we’ll show you Michael Steele’s acceptance speech. CNN Senior Political Analyst Bill Schneider is reporting on the scene.

Plus: President Obama’s debut on the world stage. CNN’s top international correspondents discuss the president’s first international moves, and his message to the global community. CNN’s Christiane Amanpour and Michael Ware weigh in.

And: CNN’s Don Lemon looks at how the president is picking his battles and setting a global tone.

Finally: The Obama team has issued its first marching orders to the army of campaign backers who've pledged to push for the new president's agenda: Host a stimulus party. The Democratic Party is calling on millions of Obama supporters to help make the case for the president’s economic recovery plan. CNN Internet reporter Abbi Tatton takes a look at exactly what the DNC is asking the campaign’s most dedicated supporters to do.

Daschle taxes over car and driver in question

[cnn-photo-caption image= http://i2.cdn.turner.com/cnn/2008/images/12/10/art.daschle.gi.jpg caption="Daschle is Obama's choice to be Health and Humans Services Secretary."] WASHINGTON (CNN) - The Senate Finance committee will meet Monday to review the tax records of former Sen. Tom Daschle, President Obama's nominee for secretary of Health and Human Services who, according to sources, didn't pay taxes on a car and driver he had been loaned.

A Democratic source familiar with the situation told CNN Daschle was loaned a car and driver by a wealthy friend and failed to disclose it on his income taxes, as he should have.

Daschle has since paid what he owed, the source said.

White House spokesman Robert Gibbs said that Daschle had brought the issues to the committee's attention himself and that President Barack Obama said is "confident" he will be confirmed.

- CNN's Dana Bash and Gloria Borger contributed to this report

[cnn-photo-caption image= http://i2.cdn.turner.com/cnn/2009/images/01/30/art.nelson.gi.jpg caption=" Nelson and Collins are seeking a compromise version of the stimulus bill."](CNN) - President Obama’s hopes of passing a massive economic stimulus bill next week in the Senate could hinge on the efforts of a bipartisan pair of centrist senators.

Sen. Ben Nelson, D-Nebraska, and Sen. Susan Collins, R-Maine, oppose the proposal in its current form and want to slash what they say is wasteful spending from the bill so moderate Republicans and conservative Democrats can vote for it.

“I want to see the president succeed,” Nelson told CNN. “But in this situation I want to make sure the actual package delivers the bang for the buck that we’re hoping it will.”

Related: Senate bracing for a 'hard slog' on stimulus bill

The two senators, known as consensus builders, will spend the weekend scrubbing the nearly $900 billion bill for spending that does not narrowly target job and economic growth.

“I want to draft a whole new approach and I’m guided by the credo: will it help turn the economy around? Will it create jobs?” Collins said.

END_OF_DOCUMENT_TOKEN_TO_BE_REPLACED 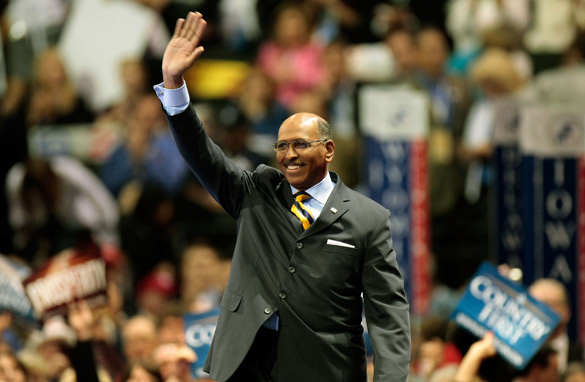 END_OF_DOCUMENT_TOKEN_TO_BE_REPLACED

“My congratulations to Michael Steele on his election as chairman of the Republican National Committee," Kaine said in an issued statement  "Together, we have the honor of leading our respective Parties during one of the most important periods in our country’s history."

Full statement after the jump

END_OF_DOCUMENT_TOKEN_TO_BE_REPLACED

“I haven’t seen anything that would cause me not to support it,” the Democrat said Friday.

The comments from the chairman of the Senate’s Armed Services Committee come a day after Arizona Sen. John McCain sent Lynn a stern letter charging that the nominee had not given the committee the right answers about his lobbying, and how he might recuse himself in relevant situations.

Levin said that information could be sent to the committee soon, and that he was hoping to vote soon after it arrives. Lynn has been asked for information about what projects Lynn lobbied on for Raytheon, as well as the more complicated issue of what areas he may have to recuse himself from if he is confirmed.

Levin said the issues raised regarding Lynn are not new - they’ve been raised before about others – and the senator feels that there are appropriate provisions to deal with the nominee’s conflicts in the near term as he divests himself from his Raytheon stock holdings and gets his final bonus from the company.

WASHINGTON (CNN) - Michigan GOP chairman Saul Anuzis has ended his bid to head the national party. He did not endorse either of the remaining candidates.

"It's been a great honor," he said. "I have enjoyed every minute."

"With that I want to withdraw my name. We have two great people running and I want to wish them the best of luck."

WASHINGTON (CNN) - Michael Steele has re-gained the lead in the fifth round of voting for RNC chair.

Blackwell had been in last place after four rounds of voting.

"My fellow Republicans and members of the RNC, I cannot change the composition of this electorate. Nor would I want to. I do want to influence your perspective and your attitude at this moment in history. We must be a party that makes good the promise of Lincoln. We must unleash a new, a new birth of freedom....