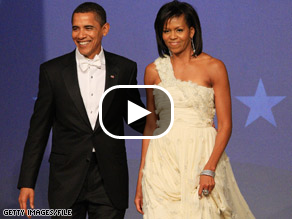 After eight years of largely being ignored by a homebody president, Washington restaurateurs are throwing open their doors to the new first family - dreaming of a presidential visit that would undoubtedly spark buzz at a time when some restaurants are struggling.

"I think the Obama family brings back this kind of Kennedy-era style of having a youthful family in the White House," said Sheldon Scott, general manager of Marvin restaurant, in the trendy U-Street corridor. "People actually plan on living in the city, not just necessarily living at the city."

Obama and his wife Michelle have signaled they will continue their tradition of "date nights" at local restaurants. Soon after moving to Washington in January, Obama and a group of friends celebrated his wife's birthday at the upscale Equinox restaurant near the White House.

Equinox chef and owner Todd Gray said since the Obamas' visit "phones are ringing like crazy, not only for reservations but also for congratulations."

"They're creating a huge buzz," he said. "They're out dining, They're out supporting small family businesses, local-run businesses that in the end are the backbone of the American economy. And if that doesn't give people hope, I don't know what will."

The city has already seen a benefit. DC Chamber of Commerce President Barbara Lang said preliminary reports show the inaugural celebrations brought in $700 million to $1 billion to Washington businesses. Lang is optimistic that trend will continue, and cited Obama's visit earlier this month to Ben's Chili Bowl, a landmark Washington restaurant, as an example.

"It doesn't mean that all of our economic problems are over with - I think we still are gonna have some challenges," she said. "[But] this past Saturday or Sunday, the line getting into Ben's Chili Bowl was five blocks long. And so that's the kind of impact that because Mr. Obama ate there, everybody wanted to go see Ben's Chili Bowl. Well, we expect that same kind of impact around the city."