There’s no shortage of controversy when it comes to the massive stimulus bill – including whether or not it should include a “Buy American” provision.

Supporters insist that using only U.S. made goods in work projects — like bridges, roads and tunnels — will help jump-start the economy by giving business to American companies. Steel companies and labor unions are pushing for such a provision. But others worry that restrictions could start a trade war, and make the economic downturn even worse.

WASHINGTON (CNN) - Two sources familiar with Hilda Solis’ confirmation process tells CNN the reason the committee vote on her nomination to be Labor Secretary was postponed today is because Democrats and Republicans on the Senate Health, Education, Labor and Pensions committee did not know about her husband’s tax issues until two days ago, when they were approached by USA Today.

"We reviewed her tax returns, and her tax returns are in order," Press Secretary Robert Gibbs told reporters Wednesday. "The story denotes that her husband had some issues with paying a business tax and, obviously, that taxes should be paid.

"[Solis] is not a partner in that business, so we're not going to penalize her for her husband's business mistakes. Obviously, her husband, I think, has and should pay any taxes that he owes."

A planned vote in the Senate Health, Education, Labor and Pensions Committee "was postponed to allow members additional time to review the documentation submitted in support of Representative Solis' nomination to serve in the important position of labor secretary," Sens. Ted Kennedy, D-Massachusetts, and Mike Enzi, R-Wyoming, said in a joint written statement.

"Members on both sides of the aisle remain committed to giving her nomination the fair and thorough consideration that she deserves. We will continue to work together to move this nomination forward as soon as possible." Kennedy is the committee's chairman; Enzi is the ranking Republican. Solis, a California congresswoman, is currently serving her fifth term in House of Representatives.

A new date for the committee to vote on her nomination has not been set yet.

[cnn-photo-caption image= http://i2.cdn.turner.com/cnn/2009/images/02/05/art.getty.obama.elementary.jpg caption="Students line up at the official ceremony to unveil the Barack Obama Elementary School sign."](CNN) - Students at former Ludlum Elementary School made history when their school became the first in the nation to be renamed after President Barack Obama. It’s virtually unheard of to name an educational institution after a sitting president. Students and parents gathered for the official name change ceremony Wednesday morning where the “Barack Obama Elementary School” sign was unveiled.

During the campaign season, the children became interested in the election, participating in mock presidential debates at the Long Island elementary school - which sits in close proximity to Hofstra University, the site of the final presidential debate.

They began the movement to officially change their school’s name to honor the 44th president. Following the election, the Hempstead School Board voted unanimously to adopt the resolution after students read their written requests to make the name change permanent.

After the inauguration, all 466 students received navy sweatshirts from the school with the words “Yes We Can” emblazoned in English and Spanish. The school is roughly 60 percent Hispanic and 40 percent African-American.

President Obama was invited to the ceremony, but was unable to attend.

Obama takes a tougher tone as stimulus stalls in the Senate

WASHINGTON (CNN) - After spending his first days in the White House wining and dining the opposition — literally — President Obama took a tougher tone Wednesday, reprising some of his harshest trail rhetoric over criticism of his stimulus plan as its Senate fate remains in doubt.

“In the last few days, we've seen proposals arise from some in Congress that you may not have read, but you'd be very familiar with, because you've been hearing them for the last 10 years, maybe longer,” he said in comments delivered at the Department of Energy. “They're rooted in the idea that tax cuts alone can solve all our problems, that government doesn't have a role to play, that half- measures and tinkering are somehow enough, that we can afford to ignore our most fundamental economic challenges: the crushing cost of health care, the inadequate state of so many of our schools, our dangerous dependence on foreign oil.

“So let me be clear: Those ideas have been tested, and they have failed. They've taken us from surpluses to an annual deficit of over $1 trillion. And they've brought our economy to a halt. And that's precisely what the election we just had was all about. The American people have rendered their judgment, and now's the time to move forward, not back. Now's the time for action.”

Press Secretary Robert Gibbs confirmed that the president was increasingly unhappy with the holdup. "He said the time to talk is over," Gibbs told reporters. "I think it’s fair to read impatience into that." 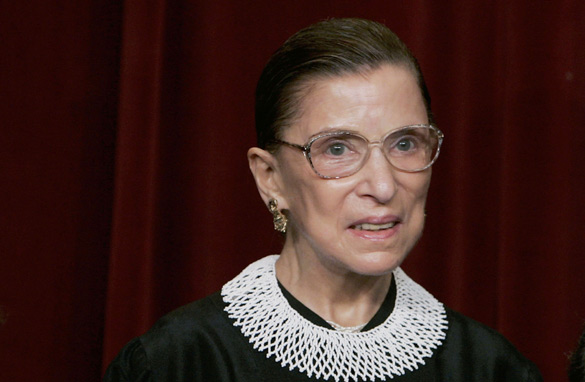 Ginsburg, 75, underwent surgery at Memorial Sloan-Kettering Cancer Center in New York City, the court said in a news release. It said she will likely remain in the hospital for the seven to 10 days, according to her attending surgeon, Dr. Murray Brennan.

"Justice Ginsburg had no symptoms prior to the incidental discovery of the lesion during a routine annual check-up in late January at the National Institutes of Health in Bethesda, Maryland," a court spokeswoman said in the statement.

A CAT scan "revealed a small tumor, approximately one centimeter across, in the center of the pancreas," she added.

Ginsburg was appointed to the Supreme Court in 1993 by President Bill Clinton.

Lawyer: Franken could be deciding factor in stimulus package

[cnn-photo-caption image= http://i2.cdn.turner.com/cnn/2009/images/02/04/art.frankengrin0204.gi.jpg caption="Lawyers for Al Franken were in court Thursday in Minnesota."]

ST. PAUL, Minnesota (CNN) - An attorney for Democrat Senate candidate Al Franken told the Minnesota Supreme Court Thursday that Gov. Tim Pawlenty and Secretary of State Mark Ritchie have an "obligation" to sign an election certificate, warning that President Obama's stimulus package could be "lost" without Franken's one vote.

A statewide recount put Franken in the lead over Republican incumbent Norm Coleman in early January, but Minnesota Sen. Amy Klobuchar has been flying solo since the Senate convened due to a pending legal battle brought by Coleman.

"The nation's business is going on as we speak," Franken attorney Marc Elias told the panel of justices. "You need no further than read the newspaper to know that it may be that the fate of a stimulus package hinges on one vote in the United States Senate. For want of a vote, a stimulus package may be lost."

Elias said that the pending post-election trial - now nearing the completion of it's second week - could continue "for many more weeks or months."

END_OF_DOCUMENT_TOKEN_TO_BE_REPLACED

Obama speaks out about religious transformation

Here's what Obama said, according to the prepared remarks.

"I was not raised in a particularly religious household. I had a father who was born a Muslim but became an atheist, grandparents who were non-practicing Methodists and Baptists, and a mother who was skeptical of organized religion, even as she was the kindest, most spiritual person I’ve ever known. She was the one who taught me as a child to love, and to understand, and to do unto others as I would want done.

I didn’t become a Christian until many years later, when I moved to the South Side of Chicago after college. It happened not because of indoctrination or a sudden revelation, but because I spent month after month working with church folks who simply wanted to help neighbors who were down on their luck – no matter what they looked like, or where they came from, or who they prayed to. It was on those streets, in those neighborhoods, that I first heard God’s spirit beckon me. It was there that I felt called to a higher purpose – His purpose. "

Illinois: Barack Obama's seat. Then-Gov. Rod Blagojevich, who had been arrested on a criminal complaint for attempting to sell the seat, defied the Senate and appointed former Illinois Attorney General Roland Burris. The Senate could find no legal way to block the appointment. Blagojevich was subsequently impeached and removed from office.

New York: Hillary Clinton's seat. Caroline Kennedy campaigned for the Senate and got some rough treatment by the New York media. She lost ground in the polls and ultimately withdrew from the race after becoming the target of anonymous attacks.

[cnn-photo-caption image= http://i2.cdn.turner.com/cnn/2009/POLITICS/02/05/obama.faith.based/art.obama.faith.cnn.jpg caption="On the campaign trail, President Obama's views on federal money and discrimination seemed clear."]WASHINGTON (CNN) - President Obama's newly revamped Office of Faith Based Initiatives is reigniting a contentious debate across the ideological spectrum over whether religious organizations that accept funds from the government should be allowed to discriminate when hiring.

In one corner is a string of religion-backed organizations that have accepted federal funds from the 8-year-old program to advance their secular charity work. President Bush issued an executive order in 2002 that allowed these groups to continue their practice of discrimination with respect to hiring. Specifically, many of the organizations carry policies against hiring outside their religion or hiring homosexuals whose lifestyles conflict with church doctorines.

In the other corner are separation-of-church-and-state advocates and human-rights organizations that say the government must constitutionally compel these organizations to follow nondiscrimination laws if they accept federal funding. Anything less, they say, would at best be a violation of church-state separation and at worst an implicit endorsement of discrimination.