Obama reaches out to voters on stimulus

(CNN) - In a video message e-mailed Saturday, President Obama calls on those who voted for him in the presidential election to throw their support behind his economic stimulus plan.

“If you haven’t been affected by this crisis, you’ve likely comforted somebody who has,” Obama says before making his case for the stimulus package making its way through Senate.

Obama says his package will create or save more than 3 million jobs, “many in your own communities,” and insists his plan is one that “America so desperately needs.”

“I know some critics are worried about the scale of this plan but if we fail to pass it promptly, our economy will fall $1 trillion short of what it’s capable of producing this year. In order to make up that difference, economists agree we must act boldly.”

Obama vows to “enlist all of you” to oversee the plan.

“As soon as this plan is signed into law, recovery.gov goes live, and you’ll be able to see precisely where your tax dollars are going, because this is your democracy, and as I said throughout the campaign, change never begins from the top down. It begins from the bottom up,” he says.

The president’s personal message comes as polls show that the public’s support for the stimulus has slipped.

RELATED STORIES:
– Obama's approval is high — but the stimulus isn't as popular
– Poll: Yes to stimulus – cost is a worry

Steele questions if Democrats’ power ‘has gone to their heads’ 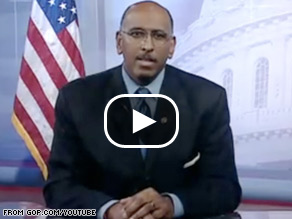 Watch Steele give the Republican address.

(CNN) - Michael Steele, the chairman of the Republican National Committee, questioned whether Democrats’ power “has gone to their heads.”

In the weekly Republican address, Steele said of Congressional Democrats:

"For the last two weeks, they've been trying to force a massive spending bill through Congress under the guise of economic relief.”

Steele said Republicans are ready to work with “reasonable Democrats to do what is right for America,” but he charged the Republican ideas have not been included.

"Good ideas - lots of them - all left out of this plan by the Democrats in Congress,” he said.

(Full text after the jump)

END_OF_DOCUMENT_TOKEN_TO_BE_REPLACED

WASHINGTON (CNN) - U.S. senators spent part of Saturday debating the massive economic recovery package, after a group of lawmakers reached a compromise agreement that trimmed billions in spending from an earlier version.

The senators were to recess at 3 p.m., and return Monday afternoon for more discussion. A vote could come Tuesday on the plan, which President Barack Obama has touted as a tonic for the nation's badly battered economy.

The compromise agreement was reached Friday after days of private meetings between centrist Democrats and Republicans who felt the $900 billion price tag on the Senate's earlier version was too high.

"There is a winner tonight," said Sen. Joe Lieberman, an Independent from Connecticut and one of the moderates whose support was crucial in efforts to corral enough votes for the plan. "It's the American people and they deserve
it."

[cnn-photo-caption image=http://i2.cdn.turner.com/cnn/2009/POLITICS/02/06/palin.contempt/art.todd.palin.gi.jpg caption="Todd Palin, shown campaigning in Virginia in 2008, didn't testify, but submitted a statement in the case."]

(CNN) - Todd Palin and nine aides were found in contempt Friday by the Alaska Senate for failing to appear to testify in the Legislature's "troopergate" investigation of his wife, Gov. Sarah Palin, a spokeswoman for the Alaska Democratic Party said.

But a Senate resolution said no one should be punished, because the 10 did submit statements to the investigator, the Anchorage Daily News reported.

The governor's office did not immediately respond to a request for comment.

A bipartisan commission in the state Legislature investigated allegations that Palin fired Monegan after he refused to sack her ex-brother-in-law, State Trooper Mike Wooten. The governor, first elected in 2006, has denied wrongdoing. 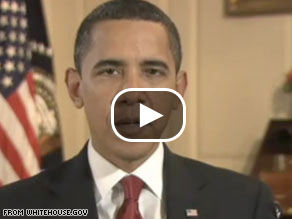 Watch Obama give his weekly address.

(CNN) - President Obama called for immediate action on the economic stimulus plan in this week’s radio and Internet address.

The president said Democrats and Republicans “responded appropriately to the urgency this moment demands” by reaching a tentative agreement on the economic package late Friday.

“The scale and scope of this plan is right. And the time for action is now,” the president said.

END_OF_DOCUMENT_TOKEN_TO_BE_REPLACED

(CNN) - Vice President Joe Biden emphasized a "new tone" in Washington and around the world as he delivered his first major speech Saturday in Munich, Germany.

Biden told delegates at a security conference that the United States will work "preventively, not pre-emptively" whenever possible to avoid conflict, and will at the same time "vigorously defend" the nation's security.

He also said the United States will do everything possible to end the threat posed by extremists.

"We reject as false the choice between our safety and ideals," Biden told the Munich Security Conference audience, which included German Chancellor Angela Merkel and French President Nicolas Sarkozy. "America will vigorously defend our security and our values, and in doing so we will all be more secure."

That policy will be in force at Guantanamo Bay detention camp, the U.S. prison that the Obama administration intends to close, Biden said.

"America will not torture. We will uphold the rights of those we bring to justice," Biden said.

[cnn-photo-caption image= http://i2.cdn.turner.com/cnn/2009/images/02/06/art.getty.palin.jpg caption="In a letter to the president, the former vice presidential candidate urges Obama to discuss the construction of an Alaska natural gas pipeline when he sits down with Canadian Prime Minister Stephen Harper."](CNN) - Alaska Gov. Sarah Palin made a special appeal to President Obama Friday, asking him to keep her state in mind when he travels to Canada in two weeks.

In a letter to the president, the former vice presidential candidate urges Obama to discuss the construction of an Alaska natural gas pipeline when he sits down with Canadian Prime Minister Stephen Harper.

“Alaskans have appreciated your strong support for the construction of such a pipeline," Palin wrote. "This project is now moving forward, and I believe that a discussion between you and Prime Minister Harper would greatly facilitate the process now under way.”

The pipeline, currently in planning stages, could reportedly generate thousands of jobs and billions of dollars in revenue for the state. Obama expressed support for the project during the campaign.