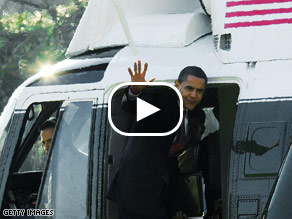 The President bumped his head as he stepped into Marine One Monday morning at the White House.

While boarding Marine One on Monday morning, the president turned to wave goodbye and ever so slightly bumped the left side of his head on the doorway to the helicopter. He seemed to recover quickly, then ducked before boarding the helicopter that would take him to Air Force One. Unfortunately for Obama, there were many cameras there to capture the accident.

This isn’t the first time a president’s head has collided with Marine One: President George W. Bush hit his head on the side of the helicopter while boarding shortly after taking office — also in full view of a row of cameras.

Luckily for both men, no visible signs of injury resulted from the minor mishap.