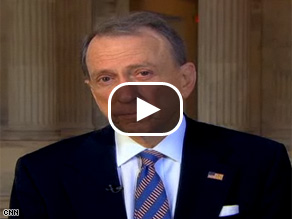 WASHINGTON (CNN)– One of the three moderate Republican senators who voted in favor of the stimulus package says he's aware of the political danger he's putting himself in.

"I understand the peril, but I didn't run for the United States Senate to further my own political interests," Sen. Arlen Specter said on CNN's American Morning. "I think when you have a decision like the one that we're facing now, there's only one way to respond, and that's to respond with action."

Specter and Sens. Olympia Snowe and Susan Collins of Maine were the only Republicans to back the $838 billion bill that passed the Senate yesterday. All three senators were involved in cutting spending proposals from the original plan crafted by Democrats, and all three have said they may not vote for the final version of the bill if more spending projects are added to the legislation by House Democrats.

"If somebody else in the Republican Party had stepped up to do the negotiations, to handle it, I would have been glad to step aside," Specter told American Morning anchor John Roberts.

The five-term senator from Pennsylvania said that with the economy facing a possible catastrophe, "the only responsible thing to do is to support the package. And bear in mind, the Republican moderates' program got $110 billion cut. We got the backing of the United States Chamber of Commerce, which is a very conservative Republican organization. They know the economy better than perhaps anybody, because they're in touch with so many thousands of businesses and they say the economy requires it."

Neither Collins or Snowe face re-election in 2010, but Specter does. He faced a bruising primary battle in 2004 against then-Republican Rep. Pat Toomey, a fiscal conservative.

The National Republican Trust PAC, an influential conservative political action committee, is pledging to support primary challengers to any Republican senator who supports stimulus package backed by President Barack Obama and congressional Democrats - the latest public show of dissatisfaction from the right over the massive measure before Congress.

"Republican senators are on notice. If they support the stimulus package, we will make sure every voter in their state knows how they tried to further bankrupt voters in an already bad economy," said Scott Wheeler, executive director of the PAC, which calls for less government spending and lower taxes.

When asked about the possible political backlash from his vote supporting the bill, Specter said "it's a good plan - not a perfect plan, but a good plan - and I'll take my chances."