Podcast: Bill Clinton dishes on being a ‘house husband’

[cnn-photo-caption image= http://i.l.cnn.net/cnn/2008/images/01/23/art.cepd.cnn.jpg caption="CNN=Politics Daily is The Best Political Podcast from The Best Political Team."] (CNN) – Bill Clinton dishes on being a “house husband.” In the latest installment of CNN=Politics Daily, the former president weighs in on presidential comparisons and opens up about the advice he gave to his wife, Secretary of State Hillary Clinton, before her foreign trip to Asia. CNN’s John Roberts interviews.

Plus: President Obama is caught in a helicopter dilemma. Should the commander-in-chief move forward with a plan to spend billions to update the Marine One fleet with an economic crisis at hand? CNN Pentagon Correspondent Chris Lawrence has the story.

Meanwhile: What happened to bipartisanship? With the battle over the economic stimulus plan highlighting a massive partisan divide, CNN Senior Political Analyst Bill Schneider reports on the great divide in Washington.

Finally: President Obama is set to head out West to lay out his plan to offer homeowners some mortgage relief. CNN White House Correspondent Dan Lothian looks at the president’s bid to cure America's epidemic of home foreclosures and fix the housing crisis.

Coleman to judges: Reconsider your ruling

The judges on Friday outlined about a dozen categories of ballots that should not be counted because they said those categories of ballots were not legally cast under Minnesota law. Those included ballots in which signatures didn't match, those submitted by non-registered voters or those inside a return envelope not signed by the voter.

But Coleman, who is seeking to add more rejected ballots to the recount of his November 4 race with Democrat Al Franken for a U.S. Senate seat, argued that not including all of about 4,800 ballots he wants re-examined was a matter of equal protection.

In their letter sent to the court Monday, Coleman's team is arguing that "likely thousands" of the ballots that had been sifted through during the recount process could have fallen under these now-taboo categories.

END_OF_DOCUMENT_TOKEN_TO_BE_REPLACED

[cnn-photo-caption image= http://i2.cdn.turner.com/cnn/2009/images/02/16/art.bush1.gi.jpg caption=" Historians have ranked Bush the seventh worst president."]
(CNN) - It's been 145 years since he appeared on a ballot, but America's admiration for the man who saved the union and sparked the end of slavery is stronger than ever, according to a new presidential survey.

Abraham Lincoln finished first in a ranking by historians of the 42 former White House occupants released over Presidents Day weekend.

The news wasn't quite as good for the latest addition to the nation's most exclusive fraternity; George W. Bush finished 36th in the survey, narrowly edging out the likes of historical also-rans Millard Fillmore, Warren Harding and Franklin Pierce.

James Buchanan - the man who watched helplessly as the nation lurched toward civil war in the 1850s - finished last.

"As much as is possible, we created a poll that was non-partisan, judicious and fair minded," said Rice University professor Douglas Brinkley, who helped organize the survey of 65 historians for cable television network C-SPAN.

END_OF_DOCUMENT_TOKEN_TO_BE_REPLACED

[cnn-photo-caption image= http://i2.cdn.turner.com/cnn/2009/images/02/16/art.obama1.gi.jpg caption=" The president's legacy may be defined by the success of the stimulus bill."]A development just a third of the way through President Obama’s First Hundred Days may come to define his presidency.

In his commentary for CNN.com, Professor Zelizer wrote, “The huge size of this legislation raises the stakes beyond what many presidents confronted in their Hundred Days.”

Franken has yet to be issued a certificate of election, and a post-election trial is currently playing out which will decide the outcome.

A press release went out early Monday morning announcing that the "Sen-elect" would be holding a roundtable discussion on the stimulus package with local mayors and a school board member, essentially carrying out duties on par with those of a sitting Senator.

Following the event at the first press conference he's held since the election, Franken said he personally does not insist people address him as Senator-elect, but said "technically" it was correct.

END_OF_DOCUMENT_TOKEN_TO_BE_REPLACED

Burris says his statements were consistent

[cnn-photo-caption image= http://i2.cdn.turner.com/cnn/2009/images/02/16/art.burris.gi.jpg caption="Burris says his statements have been consistent."]CHICAGO, Illinois (CNN) - Illinois Sen. Roland Burris reiterated Monday that his sworn testimony regarding his contacts with then-Gov. Rod Blagojevich was not inconsistent with what he later said in an affidavit about them.

The Democratic senator's comments come a day after Illinois Republican leaders called for a perjury investigation into whether Burris deceived the public last month when he failed to tell state lawmakers that former Gov. Blagojevich's brother solicited him for campaign cash at the same time that the governor himself was considering whether to appoint him to fill the Senate seat vacated by President Barack Obama.

"We said in our testimony before the impeachment committee, my lawyer stated, that we will have to file additional information in our report because there were some questions asked where we had to get sufficient information for the committee," Burris told reporters outside Fellowship Missionary Baptist Church on Chicago's South Side prior to leaving for a five-day statewide "listening tour" of his new constituents.

"We also stated that we might be incomplete in our report," he said.

He said he decided, upon receiving the court transcript, to file a separate affidavit showing whom he talked to and what was said. But, he added, "There was no change in any of our testimony. We followed up as we promised the impeachment committee. We've done everything here that we said we were going to do."

Any suggestion to the contrary, he said, "is absolutely, positively not true. It was done because we promised the committee that we would supplement information in case we missed anything."

END_OF_DOCUMENT_TOKEN_TO_BE_REPLACED

Clinton: Political factors will force GOP to cooperate with Obama 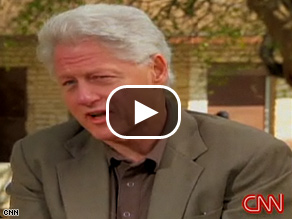 Clinton told Roberts GOP critics of Obama were on “automatic”

(CNN) - Former President Bill Clinton told CNN Monday President Obama can probably expect about a year of public support for his economic policies, and predicted that the economy would likely recover within two years or less.

“The public, I believe, will support him at least for a year in trying to work these things out,” he told American Morning’s John Roberts. “And he's been very straightforward in saying it might take as much as two years for the economy to really get in gear again. My instinct is it will happen a little quicker than that.”

Clinton tore into Republicans for their unified opposition to Obama’s stimulus legislation: “Those guys [Republicans] are on automatic... you punch a button, and they give you the answer they give you.”

Watch Clinton's criticism of the GOP

“Well, first of all, he has reached across [the aisle], and it takes two to tango,” he said. “I find it amazing that the Republicans who doubled the debt of the country in eight years and produced no new jobs doing it, gave us an economic record that was totally bereft of any productive result are now criticizing him for spending money. You know, I'm a fiscal conservative, I balanced the budget, I ran surpluses. If I were in his position today, I would be doing what he's doing.”

Clinton said political factors would eventually force some Republican lawmakers to support the president’s policies. “Here’s what I think will happen,” said Clinton. “I think that, as we go along, if the American people stick with him and if he begins to have good results, then I think more and more Republicans will cooperate with him because they will see that he's right or because he carried their states or for any number of reasons.”

The former president also defended his record against critics who said government requirements had led to a wave of risky mortgages, saying that community banks that specialized in these kind of loans as opposed to riskier securities were doing well.

(CNN) – It’s not often that a freshman member of Congress gets a ride on Air Force One and a personal shout-out from the President himself in front of the hometown crowd. Illinois Republican Rep. Aaron Schock got both last week but still voted against President Obama’s $787 billion stimulus bill.

After joining Obama on the presidential plane to Peoria, which is part of Schock’s congressional district, the President made a specific appeal to Schock during an event at a Caterpillar plant.

“Aaron’s still trying to make up his mind about our recovery package,” the President said last Thursday. “He’s a very talented young man. I’ve got great confidence in him to do the right thing for the people of Peoria,” Obama added.

But the presidential spotlight was not enough to win over Schock.

“Ultimately, I listened to my constituents and I looked at what I knew about the bill and determined it was not in the best interests of my constituents,” the freshman Republican said Sunday on CNN’s State of the Union. “It was not really a stimulus bill with the majority of the money going towards stimulating the economy.”

END_OF_DOCUMENT_TOKEN_TO_BE_REPLACED

WASHINGTON (CNN) - As auto giants General Motors and Chrysler face Tuesday's deadline to submit plans to show the government how they can repay billions in federal loans, the White House is creating a Presidential Task Force on Autos to oversee the restructuring of the auto industry, a senior administration official said.

The task force will include members from the Departments of Treasury, Labor, Transportation, Commerce, and Energy, the National Economic Council (NEC), the White House Office of Energy and Environment, the Council of Economic Advisers and the Environmental Protection Agency, the official said.

It will be overseen by Treasury Secretary Tim Geithner and NEC Director Larry Summers.

Geithner will oversee the loan agreements with the automakers.

Teams at the Treasury Department and  the National Economic Council are working with the automakers and stakeholders to prepare for their Tuesday submissions, the official said.
END_OF_DOCUMENT_TOKEN_TO_BE_REPLACED

[cnn-photo-caption image= http://i2.cdn.turner.com/cnn/2009/POLITICS/02/15/us.clinton.asia.trip/art.clinton.gi.jpg caption="Hillary Clinton seeks improved relations with China, where she said the U.S. would renew military contacts."] ELMENDORF AIR FORCE BASE, Alaska  (CNN) - Hillary Clinton says her first overseas trip to Asia as secretary of state is aimed at creating a "network of partners" to tackle problems that no nation can deal with alone, including the global economic crisis.

En route to Asia on Sunday, Clinton told reporters that the economy would serve as the backdrop of her trip, and she intends to explain steps the United States is taking with its $787 billion stimulus bill. She said she will be "seeking cooperation on ways that we are going to work through these very difficult economic times."

Clinton is slated to travel to Japan, China, South Korea and Indonesia to discuss a range of issues, including mutual economic recovery, trade, the prevention of nuclear weapons proliferation and reversing the global warming trend.

The trip represents a departure from a diplomatic tradition under which the first overseas trip by the secretary of state in a new administration is to Europe.

Speaking at the New York-based Asia Society last week, Clinton said the Obama administration wants to "develop a broader and deeper" relationship with Asia, a region that has felt overlooked by the United States despite its growing global importance.

"It demonstrates clearly that our new administration wants to focus a lot of time and energy in working with Asian partners and all the nations in the Pacific region," she said, "because we know that so much of our future depends upon our relationships there."