Inside the Obama administration 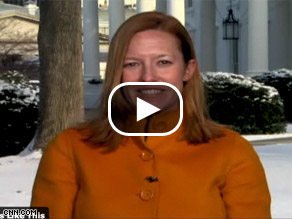 Plus: Michael Steele slams GOP heavyweight Rush Limbaugh, and the radio show host fires back at the top Republican. CNN Senior Political Analyst Bill Schneider has the latest on the controversial remarks in Steele vs. Limbaugh.

Also: President Obama is poised to sign a bill with thousands of earmarks - including some connected to members of Congress who now work for the new commander-in-chief. CNN Senior Congressional Correspondent Dana Bash takes a look at the bill that Sen. John McCain calls "insulting to the American people."

Finally: Time may be running short for ‘don't ask, don't tell.’ There's a fresh push against current policy regarding gays in the military - and with President Obama in office, its opponents may just get their wish. CNN's Brian Todd has the story.

[cnn-photo-caption image= http://i2.cdn.turner.com/cnn/2009/images/03/02/art.mccains0302.gi.jpg caption="Sen. McCain's daughter, pictured on the left, is speaking out on the impact of her father's latest presidential campaign on her personal life."]
(CNN) - Meghan McCain says that "nothing kills my libido quite like discussing politics" - and that the presidential election "killed my personal life."

"OK, maybe killed is a bit of an exaggeration," she wrote in a blog post for The Daily Beast published Monday. "But it does seem to be on life support. Of all the things people warned would happen post-election, no one ever said anything about how complicated dating would become. Especially if your dad loses the election. There are things that have been difficult, but nothing quite as tough as dating. I fear the election has destroyed my ability and desire to date. Now, I cannot say at any point in my life that I have been very good at dating. But I have become something I used to despise: people who let politics dictate his or her attraction to someone."

She said one fan of her mother, Cindy McCain, recently told her she could be "his Cindy," and asked if she ever wore pearls like her mother did. "Any guy that has a fetish for older women in pantsuits and large pearls obviously only finds my last name attractive about me," she wrote.

McCain said she did not care who her friends supported during the campaign, and that she believed political views were personal - "but when it comes to dating, it's become an entirely different subject. And I promise, no one is more surprised by this revelation than I am. ... If I am adult enough to understand that voting is one of the most personal things a person can do, why am I letting it affect how attracted to someone I am? I know that no one can really explain sexual attraction and why you are drawn to someone or not — but at this point in time, nothing kills my libido quite like discussing politics."

She said she was "turned off" both by supporters of President Obama - and her father's backers. "Recently, over dinner, a guy started explaining his reasons for supporting President Obama during the election (I didn’t ask, I think the poor guy felt guilty) and I immediately found any attraction I had previously had dissipate," she wrote. "But same thing happens if a guy starts talking about all the reasons why my father should be president. I have the ultimate Catch-22 in post-election dating. So where does that leave me, and who exactly am I attracted to? Let’s just say I’m spending a lot of time writing and even more time with my girlfriends."

END_OF_DOCUMENT_TOKEN_TO_BE_REPLACED

In 1988, the then-Arkansas governor was considered a hot pick as a future presidential candidate for his party.

That was before “the speech.”

Awarded a high-profile speaking gig at the Democratic Convention, Clinton nearly derailed his national political future with a disastrous performance. The speech was widely panned, and ran so long the crowd actually cheered when he said “in conclusion.”

END_OF_DOCUMENT_TOKEN_TO_BE_REPLACED

[cnn-photo-caption image= http://i2.cdn.turner.com/cnn/2009/images/01/29/art.blagocu0129.gi.jpg caption="Former Illinois Gov. Rod Blagojevich will include information that could be “embarrassing” in his upcoming book."] (CNN) – Former Illinois Gov. Rod Blagojevich has landed a six-figure book deal to tell his story, his spokesman confirmed to CNN Monday.

Blagojevich was impeached earlier this year amid allegations that he tried to sell President Obama’s vacant Senate seat. The former governor, who maintains his innocence, will write about the process he used to pick Obama’s successor, and “the dark side of politics he witnessed in both the state and national level.” The former governor will also discuss his two-terms in office.

The book, which has a working title of “The Governor,” is scheduled to be released by Phoenix Books in October.

Glenn Selig, Blagojevich's publicist and founder of The Publicity Agency, said the governor will divulge information that will be “embarrassing” to himself and others.

"There were some people in high places who didn't want the governor to write this book and worked to try to squash a book deal," Selig said in a statement released Monday.

The Illinois Senate voted unanimously in January to impeach Blagojevich and to permanently bar him from holding political office in the state of Illinois.

If approved, the committee would also make recommendations about how to avoid a similar crisis in the future.

The two senators plan to hold a press conference Tuesday afternoon on Capitol Hill to formally announce their proposal.

Limbaugh fires back at Steele

"Why do you claim to lead the Republican Party when you seem obsessed with seeing to it President Obama succeeds?" Limbaugh addressed Steele.

"I frankly am stunned that the chairman of the Republican National Committee endorses such an agenda. I have to conclude that he does because he attacks me for wanting it to fail," said Limbaugh.

Also on his radio program Monday, Limbaugh said Steele is being used by the "liberal media."

"Michael Steele has been around long enough to know that the liberal media will use him by twisting what I say or what others say," he said. "He took the bait, he bit down hard on the bait, he launched an attack on me, even though the premise of what was said to him was false."

No third run by Ron Paul for the White House?

[cnn-photo-caption image= http://i2.cdn.turner.com/cnn/2009/images/03/02/art.getty.ron.paul.2.jpg caption=" Ron Paul was a GOP presidential candidate in the 2008 campaign cycle."]WASHINGTON (CNN) - Ron Paul says he may not make a third run for the White House.

The Republican congressman from Texas was asked by CNN American Morning anchor John Roberts if he plans to make another bid for the presidency in 2012. "I don't think so,” said Paul. “I'm not planning on that. It's a long way off. I hardly can visualize what the country is going to be like then."

Paul was a GOP presidential candidate in the 2008 campaign cycle. He also ran for the White House as a Libertarian candidate in 1988.

While Paul was non committal on running again, the 11-term Congressman said his political organization continues to grow.

END_OF_DOCUMENT_TOKEN_TO_BE_REPLACED

[cnn-photo-caption image= http://i2.cdn.turner.com/cnn/2009/images/02/11/art.getty.arlen.specter.jpg caption="Specter may face a tough primary battle."](CNN) - Club for Growth President Pat Toomey, who has been critical of Sen. Arlen Specter's support for President Obama's stimulus plan, appears to be inching closer to a primary re-match against the Republican incumbent.

"As this disastrous recession worsens, I have become increasingly concerned about the future of our state and national economy," he said in a statement released Monday afternoon. "Unfortunately, the recent extraordinary response of the federal government - more corporate bailouts, unprecedented spending and debt, higher taxes - is likely to make things worse. I think we are on a dangerously wrong path. Pennsylvanians want a US Senator focused on real and sustainable job creation that gets our economy growing again. That is why I am considering becoming a candidate for the US Senate."

In 2004, Specter survived a tough challenge from then-Rep. Toomey, beating him by less than 2 percentage points thanks to support from President Bush and then-Sen. Rick Santorum. Toomey has been hinting at a 2010 Senate bid for months, calling Specter far more vulnerable than he was four years ago, but has not said when he might make an official announcement.

END_OF_DOCUMENT_TOKEN_TO_BE_REPLACED

The battle between Murphy, a venture capitalist, and New York General Assembly Minority Leader Republican Jim Tedisco has turned especially nasty on the airwaves over the past few weeks. A special election for the seat is scheduled for March 31.

In the latest ad, called “Just Won’t Do,” Murphy attacks Tedisco for staying silent on whether or not he supports President Obama’s stimulus package. He also criticizes Tedisco for not saying if he supports caps on executive compensation for companies receiving federal bailout money.

Murphy and Tedisco are fighting for the House seat in New York’s 20th congressional district, which Gillibrand occupied until she was tapped to replace Hillary Clinton in the Senate. The district traditionally leans Republican, and Republican National Committee Chairman Michael Steele has said winning the race is a priority. The RNC has already funded ads for Tedisco.

The DCCC would not say how much money it spent on the ad.