[cnn-photo-caption image= http://i2.cdn.turner.com/cnn/2009/images/03/02/art.burrissite0302.rb.jpg caption="Sen. Burris has a Web site to help with his 2010 re-election bid - should he decide to undertake one."]
WASHINGTON (CNN) – Even as he faces calls to resign from fellow Democrats, Illinois Sen. Roland Burris has been covering all of the bases for 2010 – just in case.

A spokesperson for Burris said Monday that the Web site supportburris.com was launched soon after the Democrat was seated in the Senate. The site allows supporters to submit donations to support Burris for re-election in 2010, even though the senator hasn’t made any definitive plans about the race just yet, according to the spokesperson.

The site appears to be in its very skeletal stages. In addition to soliciting donations, the site allows visitors to sign-up for e-mails, to sign up to volunteer for the senator’s campaign, and to share the site with a friend.

It also contains a biography of Burris and some information about his immediate family. Other pages on the site “Accomplishments,” “Endorsements,” “Issues,” “Legislation,” and several pages intended to be dedicated to press coverage of Burris and publication of photos and videos by his campaign – are all empty at this time.

Illinois Sen. Dick Durbin and Gov. Patrick Quinn have both recently said they believed Burris should resign his Senate seat. Their comments followed his revelation that Burris had engaged in unsuccessful efforts to raise money for Rod Blagojevich, the former governor of Illinois who was removed from office after being impeached, while the governor was considering him as a possible Senate replacement for President Barack Obama.

President Obama is expected to sign it by Friday or the government runs out of money.

But critics say there's excessive spending in the bill, which would be contrary to the president's recent pledge to cut unnecessary government spending and pork-laden earmarks.

Banning earmarks - usually pet projects of congressional members inserted in spending bills unrelated to the projects - is one of several pledges Obama made on the campaign trail and has made as president.

Obama said in his weekly address Sunday that politicians will "have to be more vigilant than ever in eliminating the programs we don't need in order to make room for the investments we do need. I promised to do this."

But several of Obama's Cabinet members, who served in Congress before joining the new administration, have earmarks listed on the bill

Vice President Joe Biden requested $750,000 for a University of Delaware program during his time as the senator from that state. Obama's chief of staff Rahm Emanuel, who was a Democratic congressman from Illinois, requested $900,000 for a planetarium in Chicago.

An Emanuel aide told CNN Monday that the request was submitted more than a year ago and is leftover business.

[cnn-photo-caption image= http://i2.cdn.turner.com/cnn/2009/images/03/02/art.limbaugh.gi.jpg caption=" Steele says he is the leader of the GOP."]WASHINGTON (CNN) - Republican Party Chairman Michael Steele is taking issue with the notion that Rush Limbaugh is the de facto leader of the GOP, calling the conservative radio talk show host an entertainer whose comments can be ugly.

And Steele described Limbaugh as a performer.

Last month, Steele, a former lieutenant governor of Maryland, was elected chair of the RNC. He is the first African-American to lead the Republican Party. At the time of his election, Steele said that "Rush will say what Rush has to say; we'll do what we have to do."

Steele made his latest comments regarding Limbaugh on CNN's "D.L. Hughley Breaks the News," which aired this weekend. The Steele interview was taped before Limbaugh's appearance before the Conservative Political Action Conference, an annual meeting of conservatives from across the nation.

END_OF_DOCUMENT_TOKEN_TO_BE_REPLACED

Analysts suspected that Obama would face a battle over abortion if and when he makes a nomination to the U.S. Supreme Court, but religious conservatives could use Sebelius as a warm-up for the seemingly inevitable fight.

Calling Sebelius an "enemy of the unborn," Catholic League President Bill Donohue said the Kansas governor's nomination is particularly disturbing because the health and human services secretary is one of the few members of the administration who can directly affect abortion policy.

"Sebelius' support for abortion is so far off the charts that she has been publicly criticized by the last three archbishops of Kansas City," Donohue said in a statement.

"My Catholic faith teaches me that all life is sacred, and personally I believe abortion is wrong," she said then. "However, I disagree with the suggestion that criminalizing women and their doctors is an effective means of achieving the goal of reducing the number of abortions in our nation."

(CNN) – The new Congress is getting higher marks than the last, according to a new USA Today/Gallup poll.

Both congressional Democrats and Republicans have enjoyed an increase in their popularity over the past two months, according to the survey released Monday. Democrats saw their approval rating go from 36 percent in December to 47 percent in the latest poll.

After hitting an all-time low in Gallup’s records in December with a 25 percent approval rating, Republicans have also seen their numbers begin to rise. According to the latest poll, 36 percent approve of the job Republicans are doing in Congress.

"The boost in the public's view of Congress is not a recent phenomenon - it appears to have started in January or early February," said CNN Polling Director Keating Holland said. "Early February polls conducted by a number of organizations showed higher numbers for leaders of both parties in Congress. The increase may be due to the perception that Congress was starting to take action on the economy, or it might be simply a sign that many Americans were willing to wipe the slate clean for both parties when a new year began."

The USA Today/Gallup poll surveyed 1,013 adults from February 20-22, and carries a margin of error of plus or minus 3 percentage points. 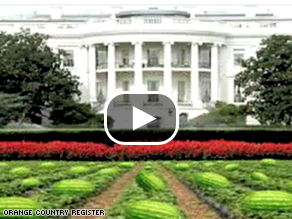 A mayor has resigned for sending an offensive e-mail.

(CNN) - A California mayor is stepping down following an outcry over a racist e-mail, CNN's Kara Finnstrom reports.

DeParle's position, also referred to as White House health care czar, was initially to be filled by Obama's first HHS pick, former Senator Tom Daschle. DeParle would work with Sebelius as the President's point person to coordinate the administration's outreach to Congress regarding health care reform. It is not a cabinet position, but considered a key post.

Daschle was to hold both positions as someone who had health care expertise, and a former Senate Majority Leader with the Washington know-how to maneuver Obama's ambitious health care agenda through Congress, before tax problems derailed his nomination and he withdrew.

DeParle is a managing director at CCMO Capital, a private-equity firm. She is a member of the Medicare Payment Advisory Commission (medPAC), a group that advises Congress on Medicare payment and policy issues. She previously served a top health official in the Clinton administration.

Obama administration officials say the health care czar position will be similar to the role Hillary Clinton played when, as First Lady, she attempted to overhaul the nation’s health care system.

"He is the voice and the intellectual force and energy behind the Republican party, and he has been up front about what he views, and hasn't stepped back from that, which is he hopes for failure," Emanuel said on CBS's Face the Nation.

"He said it, and I compliment him on his honesty," Emanuel said. "But that's their philosophy that's enunciated by Rush Limbaugh and I think that's the wrong philosophy for America."

Limbaugh was the headline speaker at this week's Conservative Political Action Conference in Washington.

"What is so strange about being honest and saying I want Barack Obama to fail if his mission is to restructure and reform this country so that capitalism and individual liberty are not its foundation?," he asked the raucous CPAC crowd during his 90 minute address on Saturday.

"And I don't - I don't think anyone wants anything to fail right now. We have such challenges. What we need to do is we need to put forth solutions to the problems that real families are facing today."

"Only by acting now can we turn this crisis into an opportunity that moves us closer to our shared goals," Clinton said at a Gaza donors conference hosted by Egypt in the Red Sea resort city of Sharm el-Sheikh.

"By providing humanitarian assistance to Gaza, we also aim to foster conditions in which a Palestinian state can be fully realized."

She said the U.S. aid package - which must be approved by Congress - has been "designed in coordination with the Palestinian Authority" to make sure the money "does not end up in the wrong hands."

Clinton was referring to the Hamas leadership of Gaza, which the United States has designated a terrorist organization. The Palestinian Authority, based in the West Bank, is led by President Mahmoud Abbas, whose Fatah party is a bitter rival of Hamas.

President Obama has not ruled out talks with Hamas but said the group must first renounce violence, recognize Israel, and abide by previous agreements that successive Palestinian governments have reached with the Israelis.