[cnn-photo-caption image= http://i2.cdn.turner.com/cnn/2009/POLITICS/03/05/gupta.surgeon.general/art.gupta.scrubs.cnn.jpg caption="Dr. Sanjay Gupta will continue his work as a surgeon and for CNN."]
WASHINGTON (CNN) - CNN correspondent Sanjay Gupta has withdrawn his name from consideration as the nation’s next surgeon general, opting to continue to devote time to his reporting and his medical career.

Bremer has launched Web site promoting his work, mostly oil paintings on canvas or panels, depicting wintery landscapes in Vermont, where he has “an old farm house.” He’s also holding an exhibition - his second - in the Vermont town of Grafton this summer.

He said he refined his skills at a school in Glen Echo, Maryland. “I started painting about two years ago,” he said. “It’s something that always interested me.”

Bremer currently does consulting work and serves on a number of boards in the Washington area. He said he’s donating the proceeds from his sales to the Chester and Grafton Historical Societies in Vermont.

A big surprise for the Obama girls 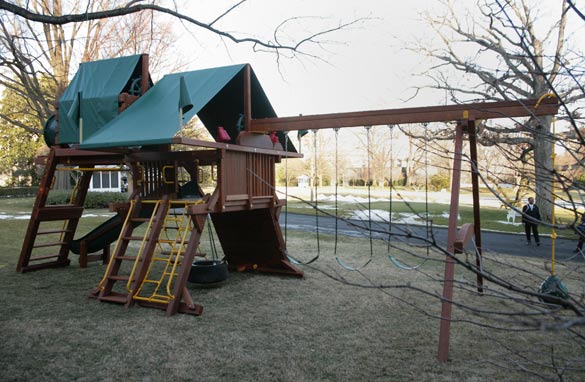 The President and first lady surprised their daughters with this new swing set which arrived at the White House on Wednesday afternoon. (Photo Credit: CHRIS KLEPONIS/AFP/Getty Images)

(CNN) - The Obama girls still don't have a puppy, but they did receive another surprise when they arrived home from school Wednesday– a brand new swing set.

A spokeswoman for First Lady Michelle Obama says Malia and Sasha, ages 10 and 7, "squealed with delight" when they saw their surprise, playing on the swing set for almost an hour in the chilly weather.

The girls' parents arranged for the play set to be installed Wednesday at the White House grounds, within sight of the Oval Office, before Malia and Sasha arrived home from Sidwell Friends school.

WASHINGTON (CNN) - The stage is set for a nail-biter of a vote in the Senate late Thursday or Friday on a giant spending bill that’s been the subject of fierce debate because of its high costs and the thousands of pet projects it funds, according to multiple Senate sources who are tracking the vote count.

A Democratic leadership aide says Senate Majority Leader Harry Reid is working the phones to get the 60 votes he needs to pass the $410 billion measure, which funds the government for the rest of the year with about an eight percent increase in spending.

If the Senate fails to pass the omnibus spending bill, Reid has said they would pass what is known as a continuing resolution to keep the government running past Friday. That would mean the much talked about 8,500 earmarks worth close to $8 billion would not get through Congress.

In the past 24 hours, two Democratic senators, Evan Bayh of Indiana and Russ Feingold of Wisconsin, announced they would not vote for the spending bill because of its high cost. Other Democratic senators, such as Claire McCaskill of Missouri and Sen. Robert Menendez of New Jersey, are still weighing their votes.

Despite the uncertainty on the Democratic side of the aisle, some aides predicted enough Republicans would vote for the bill to ensure its passage, pointing to GOP votes on key amendments this week that indicate Republican support for the final bill.

Democrats will likely schedule the vote Thursday night if they are confident they have the votes in line, but will push it to Friday if they’re uncertain.

Huckabee will return to South Carolina for Fair Tax rally

[cnn-photo-caption image= http://i2.cdn.turner.com/cnn/2008/images/11/17/art.huckabee.gi.jpg caption="Huckabee's campaign faltered in South Carolina last January."](CNN) - Mike Huckabee will travel to the early primary state of South Carolina in April to make an appearance at a rally for Fair Tax supporters, who helped energize to his underdog presidential bid when he adopted the tax proposal into his campaign platform.

The rally will take place in downtown Columbia on Tax Day, April 15, according to the Fair Tax web site.

The trip will mark Huckabee’s second trip to South Carolina since the general election ended. The former Arkansas governor did a multi-city tour of the state in December to promote his new book.

President, first lady to head to Europe in late March

The first couple will visit the United Kingdom, France, Germany, and the Czech Republic on a trip from March 31 to April 5.

The president will visit Europe to attend the G-20 economic summit as well as a NATO event, Gibbs said.

Some Democrats are calling on President Obama to veto a $410 billion dollar spending bill because it's too expensive and includes too much pork.

Senators Russ Feingold and Evan Bayh both say they will vote against the measure. The bill - which would keep the federal government running through this fiscal year - includes $7.7 billion in more than 8,000 pet projects, or earmarks.

Bayh says the bill "requires sacrifice from no one, least of all the government." He calls the measure "tone deaf" and points to a disconnect between the belt-tightening average Americans are going through and what the government is doing. Feingold says Mr. Obama should veto the bill and tell Congress to "clean it up" and "do it over."

[cnn-photo-caption image= http://i2.cdn.turner.com/cnn/2009/POLITICS/03/05/limbaugh/art.rush.limbaugh.cspan.jpg caption="Radio host Rush Limbaugh has been vocal about his displeasure with President Obama's policies."]
(CNN) - As Democrats cast conservative talk show host Rush Limbaugh as the de facto leader of the GOP, Republicans are decrying what they see as an orchestrated scheme designed to divert attention from the Democrats' spending proposals.

Democrats fired out two political e-mails about Limbaugh on Thursday morning, calling him the face of the GOP, and Republicans sent out one of their own, demanding that the White House "come clean" about and apologize for a "political attack game."

An e-mail sent on behalf of the Democratic Senatorial Campaign Committee states: "Rush Limbaugh is the leading voice of the Republican Party. Make no mistake. When Rush says jump, congressional Republicans say how high?"

The committee says that while President Obama has reached out a hand to Republicans, the GOP has "preferred to kowtow to extremists like Limbaugh rather than accept the good faith outreach of our president."

The letter asks readers to sign the committee's petition - which will be sent to Senate Republicans - "demanding that they reject the disgraceful words of Rush Limbaugh and start working with President Obama on real solutions for the American people."

The DNC sent an e-mail to supporters Thursday soliciting a "slogan in ten words or less" that will appear on the billboard in Limbaugh's hometown. "If Republican leaders aren't willing to tell Rush, then we will," DNC Executive Director Jen O'Malley Dillon wrote in the e-mail.

On the Republican side, Sen. John Cornyn of Texas sent an e-mail to supporters of the National Republican Senatorial Committee asking them to sign a petition demanding that the White House apologize for not focusing on "the hard work that needs to be done to get America's economy back on track."

[cnn-photo-caption image= http://i2.cdn.turner.com/cnn/2009/images/02/19/art.steele.gi.jpg caption="Steele is taking heat from members of his own committee."]WASHINGTON (CNN) - A member of the Republican National Committee is asking chairman Michael Steele to resign his post, saying that she has "never seen such ineptness in our GOP leadership."

North Carolina committeewoman Ada Fisher, one of three African-Americans on the 168-member committee, e-mailed members of Steele's transition team on Wednesday asking them to encourage the chairman "to step aside in the best interest of the party and let us elect another chairman." Steele himself was copied on the e-mail.

"From where I sit and from what I am seeing, Mr. Steele is further eroding confidence in the Republican Party," she wrote.

Fisher is an outspoken member of the committee who has never been a fan of Steele. She backed South Carolina GOP chairman Katon Dawson for the committee chairmanship in January.

In the e-mail, first reported by The Hill newspaper and provided to CNN by a GOP source, Fisher wrote that "the fiasco with Rush Limbaugh is a Republican Horror Show."

"Limbaugh has already promised that 'His Conservatives' won't be giving to the RNC," she wrote. "I would suggest to you that that is a real bet. If we can't raise money and continue to allow the alienation of the few verifiable red states remaining, we are foolish."

Fisher argued that Steele's attempts to reach out to African-Americans are embarrassing.

"I don't want to hear anymore language trying to be cool about the bling in the stimulus package or appealing to D.L. Hughley and blacks in a way that isn't going to win us any votes and makes us frankly appear to many blacks as quite foolish," she wrote.

“She has been spewing poisonous e-mails about Michael Steele from the day Michael Steele decided to run for chairman, on a weekly basis,” he told CNN.

END_OF_DOCUMENT_TOKEN_TO_BE_REPLACED

[cnn-photo-caption image= http://i2.cdn.turner.com/cnn/2009/images/03/05/art.bachmann.gi.jpg caption="Bachmann sounded the socialism alarm on Thursday."]WASHINGTON (CNN) - Some Republicans in Congress are continuing to warn that President Obama is intent on turning the United States into a socialist nation.

Minnesota Rep. Michele Bachmann pressed the socialism argument on Thursday, telling a conservative radio show that the Obama administration is "completely socializing the American economy" with its mortgage relief proposals and bailouts of financial institutions.

"What we've seen them do in the last five weeks is nothing short of a great leap forward toward than finalizing a place of socialism in American economic life," Bachmann told radio host G. Gordon Liddy. "We have never seen this level of socialism in the history of our country, and I think the American people would be floored when they understand the dramatic steps that Obama has taken for our future."

Bachmann called for a "a growth future, a prosperity future, a freedom liberty future."

Bachmann wasn't the only House Republican to say as much on Thursday.

Tennessee Rep. Zach Wamp, who is also running for governor in his home state, told MSNBC that the president's health care proposals represent "a fast march toward socialism."