[cnn-photo-caption image= http://i2.cdn.turner.com/cnn/2009/POLITICS/03/10/senate.spending.bill/art.capitol.cnn.jpg caption="The Senate is taking up a bill to fund the government through the end of the fiscal year."]
(CNN) - Senate Majority Leader Harry Reid expressed confidence Tuesday that the Senate would be able to pass an overdue bill that includes hundreds of billions of dollars in spending and thousands of earmarks - pet projects of lawmakers on both sides of the aisle.

Reid postponed the vote last week because he wasn't sure if he had enough votes.

"This has taken far too long on this piece of legislation. I hope that we can move on to other things with a little more cooperation from the Republicans," Reid said Tuesday. "It just seems that they're just saying no to everything."

Reid said getting the 60 votes needed to end debate on the $410 billion spending bill is "certainly doable."

"Then we'll look and see if we can get enough votes to pass it. I certainly think we can," he said.

Democrats will need at least some Republican support in order to move ahead with the bill.

But if the Senate changes the current bill, the House would have to take it up again, and House Speaker Nancy Pelosi has warned that if that happens, she'll scrap the bill - sending funding back to current levels, with no money for new programs, and eliminating all of the earmarks.

"Iran also still refuses to respond constructively to IAEA [International Atomic Energy Agency] questions about its past work to develop a nuclear weapons capability," the ambassador, Susan Rice, told a U.N. Security Council subcommittee that deals with ensuring sanctions against Iran are being enforced.

"The United States urges its fellow Security Council members not only to take note of the IAEA's serious findings but also to vigorously support the IAEA in its continuing investigations of these critical matters."

The IAEA is the U.N. nuclear watchdog agency that is charged with inspecting Iran's nuclear facilities.

Rice said Tuesday's meeting was "the Security Council's first session on Iran since the release of the IAEA director general's most recent report on Iran - a report that makes it clear that Iran is still not complying with its international nuclear obligations, including resolutions of this council."

Obama's job approval rating stands at 61 percent in a new CNN poll of polls, which averaged seven national surveys all conducted over the past two weeks.

"Obama's support is not as high as it was during the transition period and immediately after the inauguration, but approval from six in ten Americans is a pretty robust level of support," says CNN Polling Director Keating Holland.

The 61 percent approval rating is also slightly higher than his predecessors' numbers around the same time. George W. Bush stood at 58 percent around 50 days into his administration, with Bill Clinton at 53 percent, George H.W. Bush at 56 percent and Ronald Reagan at 60 percent.

With the country mired in a severe recession, the overwhelming issue for Americans is obviously the economy. But while the stock markets don't seem to have much confidence in Obama, the polls suggest Americans do.

END_OF_DOCUMENT_TOKEN_TO_BE_REPLACED

[cnn-photo-caption image= http://i2.cdn.turner.com/cnn/2009/images/03/10/art.getty.limbaugh.jpg caption="Conservative radio show host Rush Limbaugh received criticism from the DNC for his remarks that he hopes Obama fails."](CNN) – Citing an “overwhelming response” of tens of thousands of replies, the Democratic National Committee has narrowed down its top five messages from supporters to Rush Limbaugh.

With responses like, “We can fix America, just don’t Rush it,” the DNC is asking its online backers to vote for their favorite submission. The winning slogan will be placed on a billboard in Limbaugh’s hometown of West Palm Beach, Florida where the organization says he “can’t miss it.”

The responses purportedly poured in after the DNC sent an e-mail to its supporters last week urging Democrats to “talk back” to a right-wing radio personality.

“It's up to you to let Rush know that Americans reject his desire to see President Obama - and our country – fail,” DNC Executive Director Jen O’Malley Dillon wrote in the latest e-mail.

The DNC has not announced when it plans to put up the billboard.

(CNN) - NATO countries must create a comprehensive approach to oust al Qaeda, the Taliban and other extremists from Afghanistan and Pakistan, U.S. Vice President Joe Biden said Tuesday after a meeting with NATO members.

"The imperative of a comprehensive approach with a strong civilian and diplomatic effort is necessary because we know there is no purely military solution to either Afghanistan or Pakistan," Biden told reporters at a news conference after the sessions at NATO headquarters in Brussels, Belgium.

The vice president was consulting with members of the North Atlantic Council, the main decision-making body within NATO, ahead of a NATO summit April 3-4 in Germany and France.

[cnn-photo-caption image= http://i2.cdn.turner.com/cnn/2009/images/03/10/art.obama3.gi.jpg caption="Obama laid out his education agenda Tuesday."]WASHINGTON (CNN) - President Barack Obama began to flush out the details of one of his signature campaign promises Tuesday, outlining his plan for a major overhaul of the country's education system.

"We have let our grades slip, our schools crumble, our teacher quality fall short, and other nations outpace us," Obama warned in an address to the U.S. Hispanic Chamber of Commerce. "The time for finger-pointing is over. The time for holding ourselves accountable is here."

"The relative decline of American education is untenable for our economy, unsustainable for our democracy, and unacceptable for our children - and we cannot afford to let it continue," he said.

The president called for, among other things, an end to the practice of lowering state reading and math standards, as well as an end to the use of what he said was ineffective "off-the-shelf" student testing.

He also called for a longer school calendar.

END_OF_DOCUMENT_TOKEN_TO_BE_REPLACED 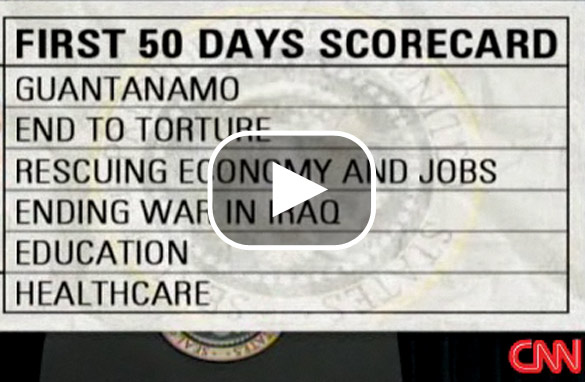 Letter urges Obama to push for democracy in Mideast

[cnn-photo-caption image= http://i2.cdn.turner.com/cnn/2009/POLITICS/03/10/obama.mideast/art.b.obama.afp.gi.jpg caption="A letter from scholars and experts notes President Obama has taken steps to reach out to the Middle East."]

More than 140 people signed an open letter to the president. Its message will be the topic of a news conference Tuesday at the National Press Club in Washington.

"We urge you to elevate democratic reform and respect for human rights as key considerations in your engagement with both Arab regimes and Arab publics," the letter said.

"We are writing this letter to raise our profound belief that supporting democrats and democracy in the Middle East is not only in the region's interests, but in the United States' as well."

The signees hail from the United States and across the globe. They include college professors, members and heads of think tanks, and activists.

[cnn-photo-caption image= http://i2.cdn.turner.com/cnn/2009/images/03/10/art.reagan.gi.jpg caption="A new panel will plan events to celebrate the 100th anniversary of Reagan’s birth."]WASHINGTON (CNN) - The House voted Monday night to approve the creation of a panel to plan a celebration of the centennial of Ronald Reagan's birth in February of 2011.

Earmark opponent Jeff Flake and former presidential candidate Ron Paul were the only Republicans who did not vote in favor of the measure, which passed 371-19.

The 11 members of the Reagan Centennial Commission will not be compensated, but the Congressional Budget Office estimated last month that reimbursement for travel expenses and other associated administrative costs would bring the eventual price tag for the project to roughly $1 million.

Update: The estimated $1 million cost of the project will not be covered by federal funds, according to a provision added to the bill before final passage by the House.