Democrats to Obama: Hurry up and fix the economy

WASHINGTON (CNN) - Some Democrats are increasingly concerned about President Obama's $787 billion financial fix for the ailing economy, and are demanding greater transparency on further spending.

With the White House seemingly comparing the nation's economy to a house on fire, some congressional Democrats are asking, where's the fire truck?

One New Hampshire congresswoman said as much to Treasury Secretary Tim Geithner on Capitol Hill recently.

"I said, hurry, please hurry, because people are waiting and they are hurting, and they need the help now," Rep. Carol Shea-Porter, D-New Hampshire, said.

She's one of a growing number of nervous Democrats on edge or at odds with some of the Obama's administration's plans on the economy. Some are taking aim at the president's budget proposals that would curb popular tax deductions for wealthier Americans.

"I don't think ultimately the criticism is surprising. That certainly happens and is all part of the process," said White House Press Secretary Robert Gibbs.

Edwards steps back into spotlight

[cnn-photo-caption image= http://i2.cdn.turner.com/cnn/2009/images/03/11/art.edwards.gi.jpg caption="Edwards spoke at Brown University Tuesday."](CNN) - Former Democratic presidential candidate John Edwards waded back into the public eye Tuesday, months after admitting to an extramarital affair with a campaign aide that likely put an end to his political career.

In a speech at Brown University in Providence, Rhode Island, the two-time presidential candidate focused his remarks on issue of poverty, calling it a "fundamental issue," according to the Raleigh News and Observer.

In a question and answer session following the speech, only one student touched on the controversy that unfolded last summer, asking Edwards if politicians should be held to a higher standard than ordinary citizens.

“I don’t think it’s for a candidate to decide what’s appropriate,” Edwards said. “It’s something for every American to decide for themselves.”

“I have my own view, which I’m going to keep to myself tonight," he added.

Since admitting to an affair with former campaign videographer Rielle Hunter last August, the onetime vice presidential candidate has kept a low profile. Wife Elizabeth Edwards has continued to advocate for universal health care and is set to release a book in the coming months entitled, “Resilience: Reflections on the Burdens and Gifts of Facing Life’s Adversities.”

In a new series designed to examine influential women who are “making and shaping modern history,” Alaska Gov. Sarah Palin and Secretary of State Hillary Clinton are the first political power players immortalized in the comic book production house’s new Female Force series. The read follows the life of the two Washington femme fatales - in graphic novel form, of course.

“These are very strong independent women that people want to know more about, and what better to teach younger kids about these role models than through comic books,” says Bluewater Productions Vice President Jason Shultz.

The graphic novels have already proven popular. Sarah Palin’s issue has sold out before its March 11 release date and is running a second printing.

But the Female Force series doesn’t limit itself to politics. Royal humanitarian and activist Princess Diana and media superstars Oprah Winfrey and Barbara Walters are set to grace covers.

Obama: 'An end to the old way of doing business'

WASHINGTON (CNN) - President Obama on Wednesday called for a reform of the much-maligned federal earmarking process.

Earmarks are unrelated pet projects that members of Congress insert in spending bills.

The president said it was time for Congress and the White House to embrace a new set of guiding principles.

His remarks came the day after the Senate passed a $410 billion spending bill that included nearly 9,000 earmarks, which are projects designed to benefit individual legislators' districts.

The earmarks in the spending bill are worth nearly $8 billion. Many critics have deemed them as wasteful, and some observers have questioned Obama's pledge to end such spending.

Some lawmakers urged Obama to veto the bill - saying it goes against the president's campaign pledge.

Obama said that while he would sign the bill, which funds the government for the remainder of the current fiscal year, future earmarks should "have a legitimate and worthy public purpose."

NEW YORK (CNNMoney.com) - What do you call a federal program that's pumping billions into the economy and creating more than a million jobs?

Though its not technically a stimulus operation, the upcoming decennial population count is helping boost the economy by putting 1.4 million people to work. The Census Bureau is also funneling money into local communities by renting office space and furniture and by buying equipment and supplies. And it is spending $212 million in advertising - mainly in 2010 - to urge people to return their forms.

Projected to cost $14 billion, Census 2010 is the most expensive ever in the nearly 220-year history of the population count. The bureau is also getting $1 billion from the federal stimulus package to augment operations, including increasing outreach efforts to minority communities and hard-to-reach groups.

The effort comes at an opportune time. With millions of Americans out of work and countless others suffering from reduced overtime and commissions, people are eager to land a government job, even if it's only for a few weeks.

[cnn-photo-caption image= http://i2.cdn.turner.com/cnn/2009/POLITICS/02/25/bank.party/art.northern.trust.gi.jpg caption="Asset manager Northern Trust told members of Congress last month that it wanted to repay the $1.57 billion in government funds as quickly as prudently possible."]
NEW YORK (CNNMoney.com) - Taxpayers hate the bank bailout. Lawmakers too. And now it looks like some of the bailed out banks themselves are starting to get fed up with it as well.

Just weeks after Congress removed a key hurdle that prevented banks from paying back funds from the Troubled Asset Relief Program, or TARP, some banks are already queuing up with checks in hand.

So far, three banks have formally declared their intentions to pay back the government. Last month, Louisiana-based IberiaBank Corp. (IBKC) said it would return $90.6 million while TCF Financial (TCB), a bank headquartered just outside of Minneapolis announced last week it was returning $361.2 million.

On Tuesday, New York City-based Signature Bank (SBNY) became the latest, announcing at a conference it had filed notice with the Treasury Department to pay back $120 million in TARP funds.

This list doesn't include the dozens of institutions that were approved for government aid, but subsequently decided to turn down the money. New Jersey-based lender Sussex Bancorp (SBBX) added itself to that group after it withdrew from the program last week.

But even more banks are poised to return TARP money, including some of the nation's largest.

Envoy to oversee closing of GITMO

WASHINGTON (CNN) - Two senior administration officials confirm that Daniel Fried will be named a special envoy to oversee the closing of the Guantanamo Bay prison.

Fried is currently assistant secretary of state for European and Eurasian Affairs. The new job is intended to underscore the administration’s seriousness in shutting down the facility. Fried is a veteran diplomat who worked under former President George W. Bush. His main job will be to negotiate transferring Guantanamo detainees to third countries, mainly in Europe. 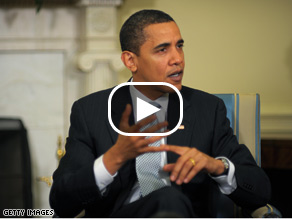 WASHINGTON (CNN) - President Obama outlined goals for the upcoming Group of 20 summit Wednesday morning at the White House, and urged nations to take aggressive actions to jumpstart their own economies.

"I think it's very important for the American people to understand that as aggressive as the actions we are taking have been so far, it's very important to make sure that other countries are moving in the same direction," President Obama told reporters in the Oval Office.

The president noted that the US has taken a "significant lead" with his $787 billion economic recovery act, but stressed that international cooperation is essential top bring about stability in world markets.

The remarks came during a joint media appearance with Treasury Secretary Timothy Geithner, held before Geithner embarks on an overseas trip to meet with G-20 finance ministers and central bank governors in Europe.

"It's time now for us to move together and to begin to act to put in place a stronger framework of reforms. A lot of good work has happened, but we need to now bring this together so that we're together as a world economy working together," Geithner echoed in the morning meeting. "Everything we do in the United States will be more effective if we have the world moving with us."

Geithner is set to discuss how emerging markets and developing countries can maintain stability and are able to continue purchase of American goods in the upcoming G-20 meeting.

[cnn-photo-caption image= http://i2.cdn.turner.com/cnn/2009/images/03/10/art.getty.capitol.police.jpg caption="Police found five guns and a sword in a car during a traffic stop near the U.S. Capitol on Tuesday."]

WASHINGTON (CNN) - Police found five guns and a sword in a car during a traffic stop near the U.S. Capitol on Tuesday.

Capitol Hill officers became suspicious as they questioned a man driving a white Pontiac, a spokeswoman said. The officers, based on their conversation, grew concerned about the possibility that he had hazardous materials in his car, she said.

The driver, who was alone at the time, was taken into custody and a hazardous materials team was dispatched to the scene. While no such materials were found, the team discovered the firearms and the sword, Sgt. Kimberly Schneider noted.

Obama to lay out guidelines to overhaul earmarks

Earmarks are unrelated pet projects that members of Congress insert in spending bills.

Some lawmakers have urged Obama to veto the $410 billion omnibus spending bill - saying it goes against his campaign pledge to bring an end to wasteful spending.

White House officials said Obama will sign the bill to keep key government agencies funded, but will lay out the new guidelines on earmarks as a not-so-subtle threat that he could veto future spending bills that do not comply with his objectives.

Obama may sign the bill into law behind closed doors rather than make a public show of it, White House press secretary Robert Gibbs said.