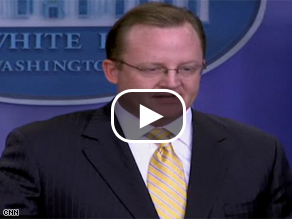 The comments came at the White House daily briefing, during which Gibbs dismissed Cheney's statement Sunday on CNN that several of President Obama's policies had left the country less safe.

"Well, I guess Rush Limbaugh was busy, so they trotted out the next most popular member of the Republican cabal," he said. "I would say that the president has made quite clear that keeping the American people safe and secure is the job - is the most serious job that he has each and every day.”

On CNN's State of The Union with John King Sunday, Cheney defended the Bush administration's policies on the handling of enemy combatants.

"I think those programs were absolutely essential to the success we enjoy, of being able to collect the intelligence that let us defeat all further attempts to launch attacks against the United States since 9/11," he said. "I think it's a great success story. It was done legally, it was done in accordance with our constitutional practices and principles…"

Gibbs later dialed back his comments, after being asked by a reporter if the sarcasm was the official White House "sanctioned tone" toward the vice president.

"Some times I ask forgiveness, rather than for permission," he said. "I hope my sarcasm didn't mask the seriousness of the answer…that for seven plus years the very perpetrators that the vice president says he's concerned about weren't brought to justice."

Republicans losing confidence in their leaders

According to a Pew telephone survey of 1,308 Americans conducted from March 9-12, just 43 percent of Republicans approve of their party's leaders in Washington - a 12-point drop from just one month ago, when their approval rating among Republicans stood at 55 percent.

In the month between early February and early March - a period that saw furious debate over the president’s economic stimulus package, followed by the bill’s ultimate passage - support for GOP leaders dropped 10 points among self-described conservative Republicans, and 12 points among moderate and liberal Republicans.

Among all Americans, support for the GOP is even lower. Just 28 percent approve of the job Republicans are doing, a six-point drop from last month, and slight majority of Americans say they disapprove of Republican leaders.

Meanwhile, 47 percent of Americans approve of the job Democratic leaders in Congress are doing, a rating virtually unchanged from a month ago.

The GOP also appears to be suffering from a lack of clear leadership. When asked who is leading the Republican Party, barely a quarter of Americans could come up with a name.

END_OF_DOCUMENT_TOKEN_TO_BE_REPLACED

Catherine Eugenia "Jean" Biden was taken to the University of Pennsylvania hospital in Philadelphia after falling Sunday at her home in Delaware.

The vice president's spokeswoman, Elizabeth Alexander, issued a statement saying that Mrs. Biden is in stable condition after the surgery, which was performed by Dr. Samir Mehta, the chief of the Division of Orthopaedic Trauma at the hospital.

The operation involved "applying a plate and screw device to Mrs. Biden's hip," the statement said.

"Dr. Mehta is pleased with the outcome of the surgery."

[cnn-photo-caption image= http://i2.cdn.turner.com/cnn/2009/images/03/16/art.frankhand0316.gi.jpg caption="The House Financial Services Committee, chaired by Rep. Barney Frank, is taking a look at the bonuses being paid to AIG employees."]
WASHINGTON (CNN) - Outraged House Democrats are scrambling to figure out what, if anything, they can do to recoup the $165 million in bonuses AIG awarded to employees after the company received $170 billion in federal bailout funds.

A House Democratic leadership aide and a House financial services committee aide said Congress is trying to shame AIG executives and employees into forgoing the bonuses while investigating possible legal avenues that can be used to force AIG to return the money used for bonuses.

The House financial services committee is trying to determine if Congress can force AIG to renegotiate the bonuses the company says it is legally required to give employees as dictated by contracts negotiated before it received its first infusion of bailout dollars in September, according to the committee aide.

Both aides said it is unclear what authority Congress has to force AIG to take back the bonuses. Complicating the issue is the fact that the first infusion of cash to AIG was authorized by the Federal Reserve before Congress passed the $700 billion Trouble Asset Relief Program, which included some restrictions on executive pay.

AIG CEO Edward Liddy will face intense questioning about the bonuses when he testifies Wednesday before the House Financial Services subcommittee on capital markets.

Obama shows off his cheesesteak knowledge

And unlike former presidential candidate John Kerry, who once committed the cardinal sin of ordering the sandwich with Swiss cheese at Pat’s King of Steaks in Philadelphia, the president has apparently learned a truism of campaigning: a real cheesesteak is served not with Swiss, provolone or cheddar … but with whiz.

During a Monday press conference, Obama went out of his way to demonstrate this knowledge after meeting with small business owners from around the country, including Marco Lentini, who owns an organic restaurant in Philadelphia.

“I asked him, what was the equivalent at his shop of a cheese steak,” Obama said of the meeting. “And he described to me, what was it? A chicken ... ?”

Lentini interrupted, drawing laughter from the president and the press corps.

During the campaign, Pennsylvania Gov. Ed Rendell said the future president could use a daily cheesesteak ration. "Perhaps the only thing I don't like about him is, he's too thin," he said.

Obama was quick to point out the perils of too much Pat’s. "A cheesesteak, once a day," he mused, "and I will have the pleasure of looking like Ed Rendell."

In a statement, Land praised the White House’s decision Monday to reject Sanford’s request for a waiver to use stimulus money to pay down state debt instead of spending it. He accused the governor of “playing political games while our state suffers.”

“By playing these games, the only thing being stimulated is Sanford’s profile with the radical right-wingers in Washington,” Land said. “It amounts to nothing more than political Viagra for him.

“It’s time to get to work and get South Carolina moving forward,” he said. “Mark Sanford needs to get out of the way.”

[cnn-photo-caption image= http://i2.cdn.turner.com/cnn/2009/images/03/16/art.boshinseki0316.gi.jpg caption="Joined by VA Secretary Eric Shinseki, the president pledged Monday to transform the agency responsible for looking after the nation's veterans."]
WASHINGTON (CNN) - President Barack Obama pledged Monday to make good on his promise to transform the Department of Veterans Affairs, and said he would "dramatically improve" mental health aid.

Flanked by Veterans Affairs Secretary Eric Shinseki, the president said his budget calls for a $25 billion increase in funding for the VA over the next five years - a commitment that will be tested by the needs presented by veterans returning from Iraq and Afghanistan.

"With this budget, we don't just fully fund our Veterans Affairs health care program, we expand it to serve an additional 500,000 veterans by 2013," he said.

He promised that the VA would "dramatically improve services" related to mental health, post-traumatic stress disorder and traumatic brain injury - and said homeless veterans would be targeted for support.

"Those heroes have a home," he said. "It's the country they served, the United States of America, and until we reach a day when not a single veteran sleeps on our nation's streets, our work remains unfinished."

“I am excited to be adding Trevor, a communications strategist with extensive private sector, political and government experience, to my team,” Steele said in a statement. “Filling key staff positions, together with analyzing and implementing the findings of our top-to-bottom review of the committee’s operations, will help the RNC spread our message and elect more Republicans."

Dodd gets GOP challenger in Connecticut

[cnn-photo-caption image= http://i2.cdn.turner.com/cnn/2009/images/03/16/art.dodd.cnn.jpg caption="Dodd is facing a challenge from Rob Simmons."](CNN) - Connecticut Sen. Chris Dodd, the chairman of the Senate Finance Committee whose approval ratings have sharply fallen as the nation's economy sputters, will have to defend his seat against at least one high-profile Connecticut Republican.

Former Rep. Rob Simmons, a three-term congressman who represented the eastern half of the state, said Sunday he has decided to mount a challenge against Dodd in 2010.

Speaking to CNN, Simmons said the decision came after a long discussion with his family.

"I met with the family Sunday and over the weekend I had long talks and we decided to go forward," he said. "We will be filing papers and doing all the administrative stuff in the next couple of weeks and then we will have a rollout in early April."

Simmons, once among the few remaining Republicans in the Northeast, lost his seat in 2006 by a razor-thin margin to Democrat Joe Courtney after a race that largely turned on Simmons' support of the war in Iraq.

In a recent survey from Quinnipiac University, Simmons holds a statistically insignificant 1 percentage point lead over Dodd, 43 percent to 42 percent.

END_OF_DOCUMENT_TOKEN_TO_BE_REPLACED

Gates will not attend NATO meeting with Obama

[cnn-photo-caption image= http://i2.cdn.turner.com/cnn/2009/images/03/16/art.getty.robert.gates.jpg caption=" U.S. Defense Secretary Robert Gates has repeatedly said there will be many tough decisions to be made in this budget on weapons programs."]WASHINGTON (CNN) – U.S. Defense Secretary Robert Gates will not attend next months NATO Summit with President Obama in order to focus on the defense budget, according to Pentagon officials.

"Secretary Gates will remain in Washington to keep working on what is being called a "very difficult budget," this year, Pentagon spokesman Bryan Whitman said.

"He had hoped to join President Obama in Strasbourg and Kehl to celebrate the alliance's 60th anniversary, but his work on the 2010 budget will not permit him to leave Washington then," another Pentagon spokesman, Geoff Morrell, said in a statement. "He simply needs more time to review all of our major weapons programs and assess how they fit into his efforts to strategically rebalance the department's budget."

Gates has repeatedly said there will be many tough decisions to be made in this budget on weapons programs. High-profile, and pricey, programs Gates will have to weigh whether to keep or to cut include the Air Force's F-22 "Raptor" fighter, the Army's $160 billion Future Combat System program and the over-budget and delayed new presidential helicopter program.

Asked why Gates would be skipping a NATO meeting where most ministers of defense will join their heads of state, Whitman said the Secretary believed there was very good U.S. representation in President Obama.