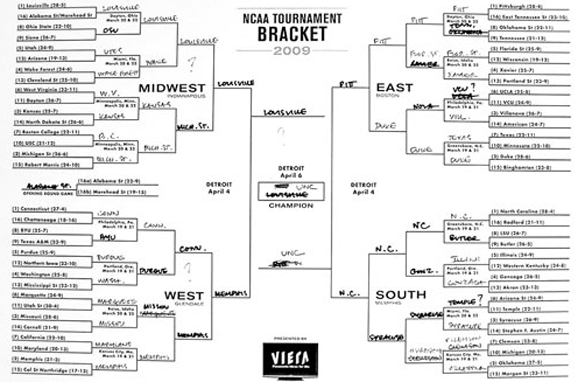 In all, the president is taking few risks when it comes to his Final Four teams: Louisville, Pittsburgh, and North Carolina are all No. 1 seeds, while Memphis is seeded No. 2.

But the picks are sure to anger the state of Connecticut, whose Huskies are the only No. 1 seed Obama doesn't have going to the final four.

The president is also not picking an upset many observers have predicted - he has No. 12 Arizona falling to No. 5 Utah in the first round.

But the decision has nothing to do with the fact Obama battled a senator from Arizona for the presidency last year, he assured ESPN.

"It has nothing to do with McCain - I think Arizona is a great state: I love playing golf there. But hey just squeaked in based on reputation," Obama said.