Obama aide: Economy will 'bottom out this year' 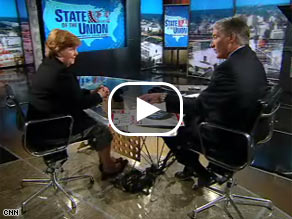 WASHINGTON (CNN) – President Obama’s lead economist predicted Sunday that the nation’s struggling, recessionary economy will be growing by the end of the year.

“I have every expectation, as do private forecasters, that we will bottom out this year,” Christina Romer, chair of the White House Council of Economic Advisers, said on CNN’s State of the Union. “And, [we’ll] actually be growing again by the end of the year.”

Romer’s comments came in a wide-ranging interview with Chief National Correspondent John King where she defended the new administration’s economic policies in the face of growing criticism by Republicans – particularly over how Treasury Secretary Timothy Geithner handled payment of $165 million in bonuses to AIG employees and how Geithner has been slow to roll out the specifics of his plan to stabilize some of the nation’s largest banks.

“I think it is important to realize this is just one piece of what we're doing,” Romer said of the detailed Geithner bank rescue plan expected any day now. Romer pointed out that in the roughly nine weeks since Obama’s inauguration, the White House has rolled out a housing plan, a small-business plan, and a consumer and business lending initiative. “This is just one more of those pieces, and I don't think Wall Street is expecting the silver bullet . . . there’ll be more to come.”

Romer also left open the possibility that the White House could take more drastic action to stabilize the nation’s mortgage market through its control over mortgage giants Fannie Mae and Freddie Mac. She suggested the two massive financial entities could be broken up in order to make them more manageable and possibly avert another financial and mortgage crisis.

“I think that’s certainly going to be an issue going forward,” Romer told King when asked whether the two companies needed to be broken up. “I think it should be part of the overall financial regulatory reform.”

“If you are going to be too big to fail, we’ve got to have an eye on you and make sure that you’re taking prudent practices,” Roemer also said of large entities like Fannie, Freddie, and AIG which have posed systemic risks to the nation’s financial system in the past six months.

Romer also said she wasn’t sure “it was useful” to get to the bottom of exactly how the recent stimulus bill came to include language protecting $165 million in bonus payments recently paid to the same AIG employees who brought the financial behemoth to the verge of collapse.

“The President, again, is very aware of just how outrageous these things are,” she said when asked about the AIG bonuses.