Cafferty: Should government be involved in saving newspapers?

[cnn-photo-caption image= http://i2.cdn.turner.com/cnn/2009/images/03/25/print.gi.jpg caption=" Join the conversation on Jack's blog."]
The government might step in and help rescue the struggling newspaper industry. Democratic Senator Benjamin Cardin has introduced a bill that would allow newspapers to operate like nonprofit organizations — kind of like public broadcasting stations.

The “Newspaper Revitalization Act” would let newspapers choose a tax-exempt status; they wouldn’t be able to make political endorsements anymore, but could report on all issues — including political campaigns.

Advertising and subscription revenue would be tax-exempt; and contributions made to help support coverage would be tax deductible.

[cnn-photo-caption image= http://i2.cdn.turner.com/cnn/2009/images/01/04/art.terryvid0104.yt.jpg caption="A fundraiser for McAuliffe was co-chaired by GOP lobbyist Ed Rogers."]WASHINGTON (CNN) - Virginia gubernatorial candidate Terry McAuliffe is taking flack from one of his Democratic rivals for attending a campaign fundraiser co-hosted by a prominent Republican lobbyist who publicly opposed Barack Obama during the 2008 campaign.

The event was held Tuesday night at the Washington office of the BGR Group, a top government affairs and public relations firm founded by three Republicans including lobbyist Ed Rogers, a friend of McAuliffe's who co-hosted the fundraiser.

The campaign of former House member Brian Moran - who is seeking the Democratic nomination along with McAuliffe and state senator Creigh Deeds - called the fundraiser "offensive" and accused Rogers of joining with "Rush Limbaugh and others in raising racially and religiously charged attacks against then Sen. Obama."

"It's sad that in the same week Terry McAuliffe aired a radio ad claiming credit for helping to elect Barack Obama, he's holding a fundraiser with someone who did everything he could to defeat him," said Moran campaign manager Andrew Roos.

The McAuliffe campaign hit back, arguing that the eventual Democratic nominee will need a thick wallet to defeat Republican candidate Bob McDonnell and accusing the Moran team of being the only campaign in the Democratic race "actively attacking other Democrats."

They called the BGR group "bipartisan" and said the fundraiser demonstrates that McAuliffe will bring an ability to work with both parties to the governor's mansion.

END_OF_DOCUMENT_TOKEN_TO_BE_REPLACED

A Quinnipiac University survey of registered Pennsylvania voters released Wednesday suggests Specter trails conservative Pat Toomey in a hypothetical Republican primary matchup by a 41 to 27 percent margin, with 28 percent unsure. But a Franklin and Marshall College poll released the same day indicates that Specter leads Toomey 33 percent to 18 percent, with 7 percent for other candidates and 42 percent unsure. While the Franklin and Marshall survey suggests that Specter leads in the matchup, 51 percent of Republicans questioned in that poll believe its time for a change rather than see Specter re-elected.

In the Republican primary six years ago, Specter narrowly edged out Toomey, at the time a three term member of the House of Representatives. Nowadays Toomey is the president of the Club for Growth, a conservative political organization that raises money for candidates who support a low tax and limited government agenda. Toomey is inching closer to a rematch with Specter.

Specter was one of only three Republican lawmakers in Congress who supported President Barack Obama's stimulus plan. His vote in favor of the stimulus, along with fellow Republican Sens. Susan Collins and Olympia Snowe of Maine, were crucial to the passage of the bill.

The Quinnipiac poll suggests that Specter is paying a political price for his support of the stimulus. The survey indicates that Specter has an overall approval rating of 52 percent, but that drops to 36 percent among Republicans. Seven out of ten Democrats approve of how Specter's handling his job as senator. Eight-seven percent of Democrats support Specter's vote on the stimulus, while seven out of ten Republican disapprove of his vote.

END_OF_DOCUMENT_TOKEN_TO_BE_REPLACED

WASHINGTON (CNN) - Republicans in Congress aren't the only lawmakers President Barack Obama will have to win over as he pitches his budget on Capitol Hill.

In a letter to the Senate Budget Committee dated Tuesday, 12 of the 16 members of the centrist Senate Democratic coalition - which calls itself "the moderate Dems Working Group" - expressed grave concerns about the direction of the president's $3.6 trillion budget.

The lawmakers note the Congressional Budget Office's projection of a cumulative deficit over the next 10 years of $9.3 trillion, "roughly $2.3 trillion higher than the president's budget had assumed."

END_OF_DOCUMENT_TOKEN_TO_BE_REPLACED

Hoekstra to announce decision to run for governor on Monday

Hoekstra, who has already said he would retire from Congress at the end of his term in 2010, has been mulling a run for months to succeed the term-limited Democratic Gov. Jennifer Granholm. He told WJR that he'll make an announcement on Monday and that he will "spend a day doing it."

Hoekstra was vague on his actual intentions, but strongly suggested that he would run. When WJR radio host Frank Beckmann said he predicted that Hoekstra would run for governor, the Republican replied, "you might find yourself to be very, very right."

Although Michigan leans Democratic and voters in the state overwhelmingly picked Obama on Election Day, Hoekstra said he's confident that a Republican could win.

"In a blue state, how do you put together a coalition that enables you to be successful on Election Day?" Hoekstra said. "I think it's very possible to do."

Granholm's popularity has taken a hit in Michigan, a state where the faltering auto industry has led to the highest unemployment rate in the country. Hoekstra said he hopes the Democratic candidates, namely Lt. Gov. John Cherry, run on the same policies as Granholm.

"I hope that John Cherry and the Democrats run on Jennifer Granholm's record," Hoekstra said. "The slogan's very simple on the other side: if nothing changes, nothing changes."

Early polling shows Hoekstra towards the top of the Republican field. L. Brooks Patterson, a local county executive, is on top with 22 percent, and Hoekstra comes in second with 15 percent, according to a recent Inside Michigan Politics poll. The poll was conducted from March 4-10 with 600 registered voters in Michigan and had a sampling error of plus or minus 5.7 percentage points. 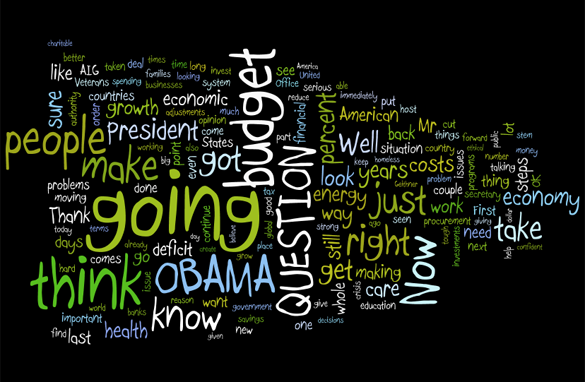 (CNN) - What words did President Obama use most often in his press conference last night?

CNN has compiled word clouds of the entire press conference including all questions and answers, thanks to Wordle.net. The bigger the word, the more times Obama used it.

Check those out after the jump!

END_OF_DOCUMENT_TOKEN_TO_BE_REPLACED

Biden confident budget have 'all the major elements intact'

"Look, I am confident that with the leadership of the Speaker and with Harry Reid we're going to get our budget with all the major elements intact," Biden said.

Some congressional Democrats consider the spending proposal too large, given the deficits projected by the Congressional Budget Office, and have offered alternative budgets with billions slashed from the Obama plan. The president is on Capitol Hill today to sell his proposal.

Biden said he thinks the administration will prevail in accomplishing their priorities.

"I feel very confident that we are going to get a budget that is totally consistent with and reflective of all we have asked for in the budget that we submitted to the Congress," he said.

Organizing for America, an arm of the Democratic National Committee, sent an e-mail early Wednesday afternoon tailored to each congressional district where Obama supporters live, according to a copy provided to CNN by a Democratic source.

"Members of Congress will begin debating President Obama's budget this week, with a vote likely set for next week," reads the note from OFA's Director Mitch Stewart. "What you do now will decide what kind of debate they have - one that's dominated by special interests and partisan voices intent on keeping the status quo, or one that reflects the priorities of citizens like you."

Stewart then asks the 13 million people who will receive this email to "pick up the phone" and express support for the president's budget to their congressmen and senators. OFA lists the names and direct office telephone numbers for the congressman and two senators.

The e-mail follows a weekend canvassing drive by OFA to drum up support for Obama's budget priorities.

Behind the scenes: Ed Henry's take on exchange with Obama

[cnn-photo-caption image= http://i2.cdn.turner.com/cnn/2009/POLITICS/03/25/henry.obama/art.henry.pool.jpg caption="CNN's Ed Henry says he had several provocative questions prepared in advance of the news conference."]
Ed Henry, CNN's senior White House correspondent, got a tough answer from President Obama when he asked Tuesday night why Obama waited days to express outrage on the AIG bonuses. "Because I like to know what I'm talking about before I speak," Obama said. Here's Henry's take on what happened.

WASHINGTON (CNN) - The most amazing part of the exchange to me is that I didn't go into the East Room intending to ask President Obama about AIG.

After frantic preparation for the prime-time newser with several colleagues, especially lead CNN White House producer Tim McCaughan, I had several provocative questions in my pocket.

But none of them had much to do with the financial crisis because I assumed several of my colleagues would exhaust the topic of AIG before my turn came up.

At the first presser in February, I was about the 10th reporter the president called on. The economy had been chewed over so I went with a "sidebar" question about whether Obama, given his push for transparency, would overturn the policy at Dover Air Force Base preventing media coverage of coffins returning from Iraq and Afghanistan.

It was a surprise line of inquiry. The president made news by saying the policy was under review - and a few weeks later he overturned it.

I was heading into this event with the same strategy: make news on something unexpected (I won't tell you which topics I was working on cause it would ruin the surprise for a future presser or interview with the president).

But on Tuesday night, as I sat in the front row nervously reviewing my hypothetical questions written out in longhand (decidedly old school), I kept thinking back to a conversation I had with Wolf Blitzer Saturday night at the Gridiron dinner.

[cnn-photo-caption image= http://i2.cdn.turner.com/cnn/2009/images/03/24/art.obama4.gi.jpg caption=" Obama endorsed Scott Murphy on Wednesday, less than a week before the special election."]WASHINGTON (CNN) - For the first time since taking office, President Obama is spending some political capital to get another Democrat elected.

On Wednesday, Obama e-mailed New York Democrats endorsing Scott Murphy, the venture capitalist who is running in the special election to fill the seat in New York's 20th congressional district that was vacated by Kirsten Gillibrand when she was appointed to the U.S. Senate in January.

Murphy's Republican opponent is New York Assemblyman Jim Tedisco. The special election is scheduled for next Tuesday. Though the Democratic and Republican campaign committees in the House of Representatives have pumped resources into the race, the president has so far kept his distance.

In the e-mail, Obama calls Murphy an "ally for change" and cites his support for the economic stimulus bill that the president signed in February, a piece of legislation that has become a hot-button issue in the race.

"Scott has the kind of experience and background we desperately need right now in Washington," Obama said in the message, which was sent to nearly 60,000 upstate New Yorkers on the e-mail lists of the Democratic National Committee and "Organizing for America," Obama's political organization.