[cnn-photo-caption image= http://i2.cdn.turner.com/cnn/2009/images/03/26/art.cantor.gi.jpg caption=" Cantor called Britney Spears a a 'great performer.'"](CNN) - House Republican Whip Eric Cantor - among the unlikeliest attendees at a Britney Spears concert earlier this week in Washington - told CNN Thursday he went to the teen-dominated show for a political event, to "help the team."

"I had a political event there, and it was simply because it was there to help the team, that's why I was there," Cantor told CNN's Dana Bash.

According to a Republican aide, Cantor was specifically raising money at the concert for his political action committee, ERICPAC. The event was hosted by the Truckers Association, which has a box at the Verizon Center, where Spears was performing.

The Web site Wonkette first reported Cantor was spotted at the event, which took place as President Obama held a prime-time press conference.

Cantor told CNN the concert - part of the singer's "Circus" tour - was "quite a show."

"I hand it to the performer, she was something," he said.

The congressman also said his daughter was "really mad" he did not bring her to the concert. "She had school that day, and the next, and I wasn't going to bring her up here to miss it."

[cnn-photo-caption image= http://i2.cdn.turner.com/cnn/2009/images/03/26/art.getty.obama.online.th.jpg caption=" The meeting - a new take on President Franklin Roosevelt's fireside chats - was streamed on the Internet from WhiteHouse.gov."] (CNN) - In an appeal to the tech-savvy public, the White House's Web site opened itself to questions for President Barack Obama's online town hall meeting Thursday.

The meeting - a new take on President Franklin Roosevelt's fireside chats - was streamed on the Internet from WhiteHouse.gov, another sign that Obama is reaching out to online followers as he tries to rally an anxious country in support of his solutions to the economic crisis.

By the time the call for questions closed at 9:30 a.m. ET Thursday, 92,918 people had submitted 104,113 questions for the president. The questions spread across several categories, and more than 3.6 million rankings of the queries had been registered.

Obama had promised to answer some of the highest-ranked questions during the town hall meeting, which was held in the East Room of the White House.

"God bless them," McCain said Thursday at the Heritage Foundation when reminded of the tens of millions of people who voted for him last year.

McCain described himself as "very nervous" about the Obama administration's proposal for FDIC-like resolution authority over non-bank financial institutions like AIG in order to prevent another near calamity in the global financial system.

"I understand that we need some of these institutions to be taken over before they are total failures but I am very nervous about that . . . about the expansion of government oversight," McCain said. "But we have to do a better job of regulation and transparency. The status quo is not acceptable either."

McCain's speech Thursday at the conservative think tank focused on the country's economic crisis and dire long-term fiscal outlook. Before he spoke, the former presidential candidate was greeted by a standing ovation in an auditorium filled with people primarily in their 20's and 30's.

"America is facing tough times," a narrator says in the 30-second ad.

The TV commercial features video footage of last weekend's national canvassing drive by Organizing for America, Obama's presidential campaign organization, which has been folded into the Democratic National Committee. Natalie Wyeth, OFA's spokeswoman, said this is the organization's "first ad as a project of the DNC."

END_OF_DOCUMENT_TOKEN_TO_BE_REPLACED 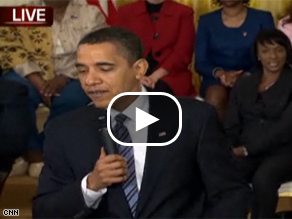 On Tuesday, President Obama took questions from the national press corps - today, it's your turn. The president will be responding to questions from ordinary Americans this morning in a video live stream, and CNN wants hear what you think of the answers. If you'd like to weigh in, submit your comment here during the livecast. CNN Political Editor Mark Preston will be joining the conversation with instant analysis.

There had been discussion of Obama going to Normandy next month on his trip to Europe, the official, Claude Gueant, told the French TV network France 24. But he would have had only an hour on the beaches where Allied forces landed on June 6, 1944, the beginning of the drive to push the Nazis out of France during World War II.

That would not have left enough time for conversations with French President Nicolas Sarkozy, Gueant said.

The White House has not confirmed that Obama will make the trip.

The 30 second spot touts the president's plans to cut the deficit and create jobs through investment in health care, energy independence, and schools.

"Thousands are going door-to-door as part of Organizing for America, gathering support for President Obama's plan to invest in America's future," says the narrator.

"You can help too. Call Congress and tell them to support President Obama's budget plan to get our economy moving again."

Organizing for America, the post-election incarnation of Obama's grassroots campaign army, is currently an arm the Democratic National Committee.

Seniors to receive $250 stimulus check in May

Biden also announced the distribution of $3.2 billion in new funding for state and local energy efficiency programs from the Department of Energy.

The checks to Social Security recipients, worth a total of $13 billion, "will make a big difference in the lives of older Americans and people with disabilities – many of whom have been hit especially hard by the economic crisis that has swept across the country," Biden said in a written statement.

The energy efficiency funds will come in the form of "formula grants for projects that reduce total energy use and fossil fuel emissions," according to a separate White House statement.

"Local leaders will have the flexibility in how they put these (energy efficiency) resources to work – but we will hold them accountable for making the investments quickly and wisely to spur the local economy and cut energy use," Biden said.

Biden, who made the announcement at a meeting with several cabinet and other senior White House officials, is the administration's point man in overseeing the distribution of the $787 billion stimulus plan. He is being assisted by former Interior Department Inspector General Earl Devaney, who has been tapped to head a new Recovery Act Transparency and Accountability Board.

Forty-seven percent of people questioned in a Suffolk University survey released Wednesday night say it's time for elect someone else for governor, with 34 percent saying Patrick deserves to be re-elected. Last June, Massachusetts voters were split on whether it was time to give someone else a chance as governor.

The poll also suggests that nearly half the state's voters don't like the job he's doing in office: Forty-nine percent of those polled disapprove of how Patrick's handling his duties as governor, with 40 percent in approval.

END_OF_DOCUMENT_TOKEN_TO_BE_REPLACED

[cnn-photo-caption image=http://i2.cdn.turner.com/cnn/2009/images/03/16/art.getty.palin.rally.jpg caption="Palin said there was 'unprecedented' media slant during the campaign."](CNN) - Sarah Palin is teeing off on the media once again.

In a little-noticed speech to a GOP dinner in Alaska last week, Palin riffed for nearly an hour on a variety of topics - including her relationship with former McCain staffers, the Bush administration's anti-terror efforts, and actress Ashley Judd.

But the Alaska governor returned multiple times to the "unprecedented level of media slant" that she witnessed during her two-months on the Republican ticket with John McCain.

Her speech, delivered last Friday to the Anchorage Lincoln Day Dinner, was recorded by the Alaska Republican Party and posted online Tuesday.

Reflecting on the campaign, Palin said there were "a variety of reasons" Republicans lost in November, namely the faltering economy, but she seemed to place most of the blame on the press.

"Some in the media actually participated in not so much the 'who-what-where-when-why' objective reporting on candidates and positions, those five W's that I learned when I had a journalism degree so many years ago in college, when the world of journalism was quite different than it is today," she said.

"And there was that media slant this go round," she said. "And unless things change, the GOP had really better can stand together, 'cause we got that on the battlefield also. I call it like I see it and like I lived it on the campaign trail. Not complaining, but dealing with reality."

"Those are the cards that are dealt us," she said, "and we had better learn to play that hand and do things right and do things better."

Later in the speech, she told a story about praying for strength before last October's Vice Presidential debate with Joe Biden in St. Louis.