WASHINGTON (CNN) – A leading congressional Republican did not pull any punches Sunday when asked whether President Obama had kept one of his most prominent campaign promises.

“I must say I'm disappointed,” Senate Minority Mitch McConnell of Kentucky said Sunday on CNN’s State of the Union. “After two months, the president has not governed in the middle as I had hoped he would. But it's not too late. He's only been in office a couple of months. Still before him are the opportunities to deal with us on a truly bipartisan basis,” the Republican told CNN Chief National Correspondent John King.

McConnell also criticized the president’s $3.6 trillion budget and the ambitious agenda on education, energy, and health care which the budget seeks to implement.

“Republicans are very much in favor of dealing with [the country’s economic crisis],” McConnell said. “What we're not in favor of is going on this spending spree over the next five to 10 years and sending the bill to our grandchildren.”

END_OF_DOCUMENT_TOKEN_TO_BE_REPLACED 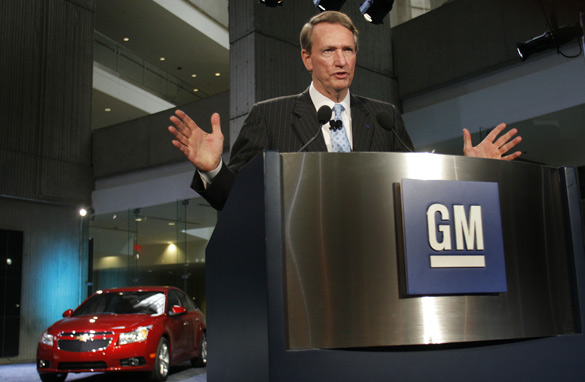 Wagoner's departure comes the day before President Barack Obama is expected to announce the latest details of the government's assistance plan for GM and Chrysler LLC.

A GM spokesman declined to comment, but a statement from the company said, "We are anticipating an announcement soon from the administration regarding the restructuring of the U.S. auto industry."

The two automakers face a Tuesday deadline to prove to the Treasury Department that they can be viable in the long term. Without such a finding, the government can recall the $13.4 billion it has already lent to GM and the $4 billion it loaned to Chrysler.

–CNN's Kate Bolduan and John King contributed to this report.

Cheney was asked two weeks ago on CNN’s State of the Union whether he thought President Obama had made the country less safe since taking office. “I do,” Cheney told CNN Chief National Correspondent John King. “He is making some choices that, in my mind, will, in fact, raise the risk to the American people of another attack,” the former vice president added.

But U.S. special envoy Richard Holbrooke, a senior diplomat in Obama’s State Department, said Sunday that he didn’t understand where Cheney was coming from with his criticism.

“I don’t have a clue what he’s talking about,” Holbrooke said,

“We are treating Afghanistan and Pakistan as a single theater. We are going to address it in an integrated way. We are going to give it more resources. And that is where the people planning the next attack on the United States or on our European allies are certainly doing it. So I just do not understand what his comments were referenced to.”

END_OF_DOCUMENT_TOKEN_TO_BE_REPLACED

WASHINGTON (CNN) – In yet another sign that President Obama may face a fight with his own party over his massive $3.6 trillion budget, a leading Democrat in the House said Sunday that the burden is on the president to prove the need for money to bailout the nation’s troubled banks.

House Budget Committee Chairman John Spratt of South Carolina was asked Sunday about his decision to remove Obama’s request for another $250 billion in bank bailout money from the House version of the budget blueprint. Spratt told CNN’s John King that the president would have to show why that additional money was necessary.

“We're essentially saying, ‘come make your case,’ Spratt said Sunday on CNN’s State of the Union. “The burden of persuasion is upon the president. Nobody likes funding these things. We’d like to see more definition than we got in the last packages. So this is our way of exercising a little leverage over it. If it's needed, we will be there to support it. But let's not create a presumption it is needed and see if we can't make the most of what's in circulation already.”

Related: Obama on his meeting with the big banks

[cnn-photo-caption image= http://i2.cdn.turner.com/cnn/2009/POLITICS/03/27/us.afghanistan.troops/art.obama.afghanistan.cnn.jpg caption="The president was joined by Secretary of State Hillary Clinton Friday when he announced his strategy for dealing with Afghanistan and Pakistan."]
WASHINGTON (CNN) - President Barack Obama warned Sunday that while his administration is now increasing U.S. troop levels in Afghanistan, America's military commitment to the troubled Islamic republic would not be open-ended.

"It's not going to be an open-ended commitment of infinite resources. We've just got to make sure that we are focused on achieving what we need," Obama said during an interview on CBS's "Face the Nation."

Friday, Obama announced plans to send another 4,000 troops to Afghanistan, along with hundreds of civilian specialists, such as agricultural experts, educators and engineers. The fresh troops are in addition to another 17,000 the president announced earlier would be sent to Afghanistan, and will be charged with training and building the Afghan army and police force.

"What I will not do is to simply assume that more troops always results in an improved situation," the president said.

"Just because we needed to ramp up from the greatly under-resourced levels that we had doesn't automatically mean that if this strategy doesn't work, that what's needed is even more troops. There may be a point of diminishing returns in terms of troop levels."

END_OF_DOCUMENT_TOKEN_TO_BE_REPLACED

Obama's approach to Iran and Iraq

WASHINGTON (CNN) - Watch Gen. David Petraeus and Richard Holbrooke as they discuss Iran and Iraq with John King on State of the Union.

Obama aides talk frankly about lack of trust with Pakistan

WASHINGTON (CNN) – On the same day that President Obama reiterated his commitment to strike high-value targets inside Pakistan’s borders, two of his senior aides who are intimately involved with pursuing U.S. strategy in the area spoke frankly about the challenges posed by Pakistan.

“Well, we have had our ups and downs,” CENTCOM Commander Gen. David Petraeus said Sunday on CNN’s State of the Union when asked whether there was trust between the U.S. and Pakistani governments.

“How much more difficult is it if you can’t be sure that you share a secret?” CNN Chief National Correspondent John King asked U.S. special envoy Richard Holbrooke, who appeared together with Petraeus on the program. “You share some sensitive information with somebody in Pakistan and there is a history of this information being passed on to the security services and then in some cases pass on to al Qaeda and the Taliban?”

“Well, of course, you’re absolutely, right,” Holbrooke responded. “It’s a huge concern for General Petraeus and me.” Holbrooke also noted that Leon Panetta made his first overseas trip as CIA director to the Pakistan region. “This is going to be his focus,” Holbrooke added.

Holbrooke also said Sunday that the U.S. intended to work on “the trust deficit” between the U.S. and Pakistan. “The relationship between Pakistan and the United States is immensely complicated and it isn’t quite where it should be,” the seasoned diplomat told King.

Holbrooke: Afghanistan is no Vietnam

[cnn-photo-caption image= http://i2.cdn.turner.com/cnn/2009/images/03/29/art.holbrookesotu0329.cnn.jpg caption="Richard Holbrooke, the Obama administration's special envoy to Afghanistan and Pakistan, appeared on State of the Union Sunday."]
WASHINGTON (CNN) – Just days after President Obama announced his comprehensive plan for the next phase of the U.S. war in Afghanistan, a senior diplomat in the new administration sought to put to rest any comparison between Afghanistan and Vietnam wars.

“But there’s a fundamental difference - the Viet Cong and the North Vietnamese never posed any direct threat to the United States and its homeland. The people we are fighting in Afghanistan and the people they are sheltering in Western Pakistan, pose a direct threat. Those are the men of 9-11, the people who killed Benazir Bhutto and you can be sure that as we sit here today, they are planning further attacks on the United States and our allies.”

END_OF_DOCUMENT_TOKEN_TO_BE_REPLACED

[cnn-photo-caption image= http://i2.cdn.turner.com/cnn/2009/images/03/29/art.bankers0329.gi.jpg caption="The heads of some of the nation's leading banks spoke with the press Friday at the White House after meeting with President Obama."]

WASHINGTON (CNN) - President Barack Obama said Sunday that the heads of America's largest banks told him they recognize the need to cut back on large bonuses in the wake of massive federal bailouts for the country's troubled financial sector.

But "the proof of the pudding's in the eating," he added during an appearance on CBS's "Face the Nation."

"I expect to see that restraint operate. ... It's very difficult for me as president to call on the American people to make sacrifices to help shore up the financial system if there's no sense of mutual obligation ... and mutual help."

Obama met the heads of the country's largest banks at the White House on Friday.

END_OF_DOCUMENT_TOKEN_TO_BE_REPLACED

Obama reiterated a previous assertion that the U.S. military would pursue extremists within Pakistan's borders after consulting with the Pakistani government.

The U.S. policy doesn't change American recognition of Pakistan's "sovereign government," Obama said during an appearance on CBS's "Face the Nation." But the United States needs to hold that government "more accountable."

Obama said his administration remains determined to weaken or destroy al Qaeda until it no longer presents a threat to the United States.

He added that his administration is prepared to constantly adjust its strategy in Pakistan and Afghanistan as necessary.