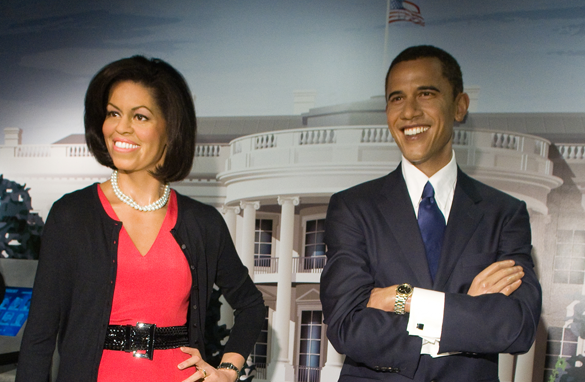 Michelle and Barack Obama become the third U.S. presidential spouse with a lifelike wax figure on display at Madame Tussauds.

She is to become the third U.S. presidential spouse with a lifelike wax figure on display at Madame Tussauds, a museum and tourist attraction.

Figures of Jacqueline Kennedy and Hillary Clinton stand in the museum alongside lookalikes of Bill Clinton and Ronald Reagan, George Washington and Martin Luther King Jr. as well as Angelina Jolie and Will Smith.

Madame Tussauds touts its new addition as an "incredibly lifelike" figure in a sleeveless red dress based on the purple dress she wore when her husband claimed the Democratic nomination for president.

The museum unveiled a figure of President Barack Obama in February.

Artists in London studied hundreds of photos and watched hundreds of hours of video footage to create Michelle Obama's likeness, the museum said in a statement.

Crafting such figures is no easy task.

Artists insert each strand of hair individually, and it can take five weeks to create a figure's head, the statement said. Materials such as red silk help create veins in a figure's eyes, it said, and technicians can spend four days perfecting a set of teeth.

"Visitors will be able to admire the figure up close," the museum said, "as well as take photos with and even hug Mrs. Obama's figure."