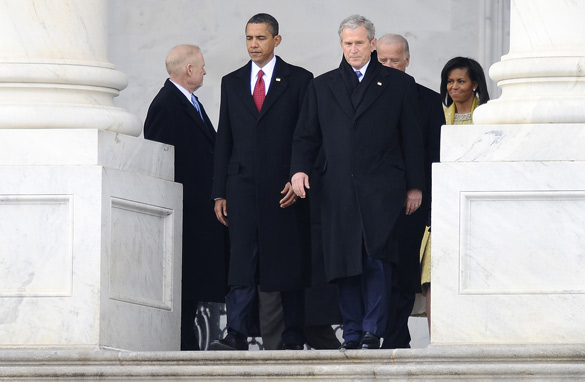 WASHINGTON (CNN) - A new national poll indicates that most Americans don't want to see an investigation of Bush administration officials who authorized harsh interrogation techniques on suspected terrorists, even though most people think such procedures were forms of torture.

Six in ten people questioned in a CNN/Opinion Research Corporation survey released Wednesday believe that some of the procedures, such as water boarding, were a form of torture, with 36 percent disagreeing.

But half the public approves of the Bush administration's decision to use of those techniques during the questioning of suspected terrorists, with 50 percent in approval and 46 percent opposed.

"Roughly one in five Americans believe those techniques were torture but nonetheless approve of the decision to use those procedures against suspected terrorists," says CNN Polling Director Keating Holland. "That goes a long way toward explaining why a majority don't want to see former Bush officials investigated."

Investigations of the military and intelligence personnel who actually used those techniques during interrogations are even less popular. Nearly two out of three Americans don't want Congress to investigate the who carried out those procedures. Fifty-five percent don't want a similar investigation by an independent panel.

The poll's release comes as a preliminary internal report on the Justice Department investigation into the authors of the Bush administration's so-called "torture memos" does not call for criminal prosecutions, but indicates the government might urge state bar associations to take sanctions against the memo writers, according to two government sources familiar with the report.

The draft, which now goes to Attorney General Eric Holder for approval or revisions, is expected to be finalized in the coming days.

"The Obama administration's recent decisions not to launch an investigation into these matters may sit well with the public overall, but not with members of Obama's own party," Holland says. "Most independents and Republicans don't think it's a good idea to investigate Bush officials involved in these decisions. But about two-thirds of Democrats support such investigations."

The CNN/Opinion Research Corporation poll was conducted April 23-26, with 2,019 adult Americans questioned by telephone. The survey's sampling error is plus or minus three percentage points.