[cnn-photo-caption image= http://i2.cdn.turner.com/cnn/2009/images/05/12/art.cheneys0512.gi.jpg caption="Liz Cheney joined her parents on a trip to the Middle East in March 2008."]
(CNN) - Liz Cheney is picking up where her father left off when it comes to taking aim at the Obama administration, saying Tuesday the new commander-in-chief appears to be siding with terrorists.

In an interview on Fox News, the daughter of Vice President Dick Cheney sharply criticized the new administration for agreeing to release photographs depicting alleged abuses at U.S. prisons in Iraq and Afghanistan during the Bush administration.

"I think it is really appalling that the administration is taking this step," she said in the interview. "Clearly what they are doing is releasing images that show American military men and woman in a very negative light."

"I have heard from families of service members from families of 9/11 victims this question about when did it become so fashionable for us to side, really, with the terrorists," she continued. "You know, President Obama has a lot of rhetoric about support for American military families, support for our men and women who are fighting for us overseas. But if he really cares about them, then he wouldn't be making such an effort to release photos that show them in a negative light."

Late last month, Pentagon officials said the hundreds of photographs released are from more than 60 criminal investigations from 2001 to 2006, and show military personnel allegedly abusing detainees. But the officials rejected allegations by the American Civil Liberties Union that the photos show a systemic pattern of abuse by the military.

In her interview Monday, Cheney also echoed recent calls from her father for the Obama administration to release classified documents detailing information yielded from the aggressive interrogation techniques since denounced by the president.

"They seem only to be interested in releasing things that really paint American in a negative light and don't give the American people a full picture of what went on," she said.

Obama Official Expected to be rejected by Senate Wednesday

WASHINGTON (CNN)– The Senate Democratic leadership is preparing to lose a vote Wednesday morning on the confirmation of David Hayes as Deputy Secretary of Interior. If that happens, it would be the first time Congress votes to reject one of President Obama’s nominees.

Republican objections to Hayes appear to have little to do with him or his qualifications, and more to do with an Obama administration policy.

Specifically, Utah Republican Robert Bennett has been leading his party’s opposition to Hayes because of an Obama decision to cancel oil and gas leases in Utah.

“This is not about Hayes,” Bennett spokeswoman Tara Hendershott tells CNN.

She says Bennett is blocking Hayes because the Department of Interior “has not provided any information he requested regarding the Secretary’s unilateral decision to cancel the oil and gas leases.”

If Republicans do successfully block Hayes’ nomination, it will be the starkest illustration yet of what it means for Democrats to have 59 seats – just one shy of a filibuster proof majority – as the Minnesota Senate race remains unresolved.

END_OF_DOCUMENT_TOKEN_TO_BE_REPLACED

Click to watch video
(CNN) – Elizabeth Edwards, wife of former Democratic hopeful John Edwards, tells CNN's Larry King that at the time her husband was carrying on an affair with videographer Rielle Hunter, she did not suspect him of being unfaithful.

"Did you have an suspicion at any time?," King asks Mrs. Edwards in an exclusive interview set to air Tuesday night on CNN.

"No. No. None," Elizabeth Edwards replies. "He's been on the road for quite some time. He's a lawyer who traveled. He took cases all over. But I saw the way he treated me. I knew the way he treated me, the commitment he had to our family. I was perhaps, the one thing I could agree with Maureen Dowd, I was probably naive, I was certainly naive."

Edwards also tells King that she believes her husband loves her, but fell prey to a flaw.

"I believe through this whole thing, John has loved me," she tells King. "I just think that he had a frailty that allowed him to do something which was completely contrary to the rest of his life."

The political spouse was also candid about the impact that her husband's infidelity has had on their marriage as she continues to live with terminal cancer.

"I completely agree with that," says Edwards. "We've talked about that. We've talked about his work at rebuilding trust, and it's really important that he get to that place, quote in time so that he understands that what he took away he does his very best job to put back."

NEW YORK (CNNMoney.com) - The recession has taken its toll on Social Security. The officials who oversee the program forecast Tuesday that the Social Security trust fund will be exhausted by 2037 - four years earlier than estimated last year.

The trust fund reflects a $2.4 trillion surplus paid into Social Security over 20 years that Uncle Sam has borrowed, spent and promised to pay back. Trust fund exhaustion represents the point at which only 76% of benefits could be paid out.

The main reason for the change in forecast: Demand for benefits has grown while money paid in has fallen because of growing unemployment and new tax breaks in the economic stimulus package passed in February.

Since the start of 2008, 5.7 million payroll tax jobs have disappeared. And another 4.3 million jobs are being filled on a part-time basis.

In the nearer term, the trustees estimate that Social Security will take in fewer taxes than the benefits that will be paid out by 2016. Last year, they estimated the near-term shortfall would occur in 2017.

WASHINGTON (CNN) - Take a look back at highlights from President Obama's first 100 days in these clips from State of the Union with John King.

"It's hard to keep from laughing out loud when people living in the bubble of the Beltway suddenly wake up one day and think they ought to have a listening tour; even funnier when their first earful expedition takes them all the way to the suburbs of Washington, D.C.," the former Arkansas governor wrote in a column on Fox News' Web site.

Earlier this month, Rep. Eric Cantor, former Florida Gov. Jeb Bush, and former Massachusetts Gov. Mitt Romney kicked off a campaign by party leaders to reshape the GOP's image, gathering at a restaurant in northern Virginia for the first of a series of town hall meetings.

The goal of the initiative, the National Council for a New America, is to connect Republican leaders with voters across the country to help get the party's electoral fortunes back on track.

"If some of these leaders had been listening already, they wouldn't need to form a group to start listening now," wrote Huckabee. "Some of the ones who have decided to start listening sure weren't listening last fall when they were supporting the TARP bailout bill that pretty much discredited any semblance of conservative conviction."

Huckabee echoed a similar sentiment last week, telling a California newspaper the GOP was at risk of becoming "irrelevant as the Whigs" if it moderated its policies.

WASHINGTON (CNN) - The United States is rushing emergency aid to Pakistan - an initial $5 million - to help people uprooted by the fighting against extremists, according to the State Department.

The U.S. had urged the Pakistanis to launch the military action that in recent days has driven hundreds of thousands of people from their villages.

Meanwhile, the Senate Foreign Relations Committee took a longer-term view Tuesday and discussed how the United States might triple aid to Pakistan over the next five years.

The State Department said Tuesday the U.S. Embassy in Pakistan and officials of the U.S. Agency for International Development were evaluating the needs of civilians fleeing the Swat valley and surrounding regions in northwest Pakistan.

"We are of course very concerned about the well-being of civilians who are fleeing the fighting in the area," State Department spokesman Ian Kelly said. "And we have personnel, USAID personnel, on the ground in Pakistan, not in the Swat valley, but in Pakistan, who are directing assistance to help them."

"We've provided a substantial amount of money through the International Organization for Migration," Kelly said at his daily briefing in Washington. "This is primarily to provide tents, provide shelter and emergency relief supplies, food and medicine to the affected populations."

Kelly said the $5 million was just an initial payment.

END_OF_DOCUMENT_TOKEN_TO_BE_REPLACED 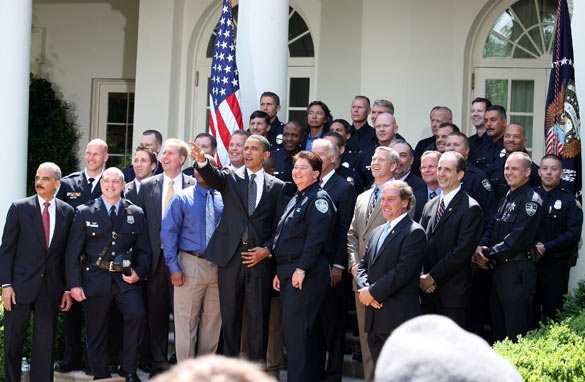 The president met Tuesday at the White House with some of the nation's top cops. (Photo Credit: Shawna Shepherd/CNN)

WASHINGTON (CNN) – President Obama promised $2 billion in additional funding to help police officers keep their jobs at a ceremony honoring some of the nation's top cops in the Rose Garden on Tuesday.

Obama presented an award from the National Association of Police Organizations to a number of top cops from around the country who he said have "literally walked through fire" to help their communities.

"You've reacted quickly in crises to protect the innocent," Obama said. "You've reacted with compassion for those that were in need and you've literally walked through the fire to help your neighbors escape disaster. Now, that's what police officers do. You step into harm's way to form, officer by officer, block by block, neighborhood by neighborhood, the line between safety and violence, calm and chaos, home and despair."

The president said $2 billion in additional grants will be made available to help make progress towards his goal of boosting the number of police officers nationwide by 50,000. He called Vice President Joe Biden "the sheriff" and said he would make sure the money is spent as intended.

"The president and I recognize the bravery you display simply by putting on that badge every day," Biden said. "The officers honored here today have been singled out for going above and beyond the call of duty. And we commend you all."

"The thought of Governor Crist becoming Senator Crist is welcome news," the Tennessee senator said in a statement. "Three years into his first term as Governor, he's the most popular elected official in Florida's history because of his outstanding career as a no-nonsense attorney general, a progressive education commissioner, and a fiscally conservative chief executive who last year led Florida to its largest property-tax decrease ever. The U.S. Senate needs Charlie Crist, and I'll do all I can to help him get there."