Officials at the Archives say they don't know how many confidential records are on the hard drive. But congressional aides briefed on the matter say it contains "more then 100,000" Social Security numbers, including one belonging to a daughter of then-Vice President Al Gore. It also contains Secret Service and White House operating procedures, the staffers said they were told.

The hard drive was last seen in the National Archive's complex in College Park, Md., sometime between October of last year and the first week of February. It was discovered missing in late March, prompting a thorough search for the small, 2.5 pound device, the Archives said.When it could not be located, the inspector general's office opened a criminal investigation.

On Wednesday, the Archives announced a $50,000 reward for information leading to its return.

The Archives said that no national security information is on the hard drive, nor any original documents. But they said it does contain "personally identifiable information," and they take the loss "very seriously."

U.S. Rep. Darrell Issa, R-California, whose staff was briefed on the matter, said the House will hold a hearing Thursday on the incident.
END_OF_DOCUMENT_TOKEN_TO_BE_REPLACED

[cnn-photo-caption image= http://i2.cdn.turner.com/cnn/2009/images/05/20/art.waxman0520.gi.jpg caption="Democrat Henry Waxman is trying to get his party's massive climate change bill out of his committee by Memorial Day."]
WASHINGTON (CNN) – As Congress prepares for a weeklong recess next week, Democrats on the House Energy and Commerce Committee have armed themselves with a special weapon to deal with a possible Republican effort to delay getting a major piece of legislation out of committee by Memorial Day.

Democrats on the committee have hired a speed reader to read the more than 900-page climate change bill if necessary.

A request to have the entire bill read aloud is a prerogative Republicans have a right to invoke which could be used to frustrate Committee Chairman Henry Waxman's deadline of Memorial Day to get the committee's work on the bill done.

Even with the use of the speed reader, reading the entire bill could take the equivalent of more than a full work day of time. 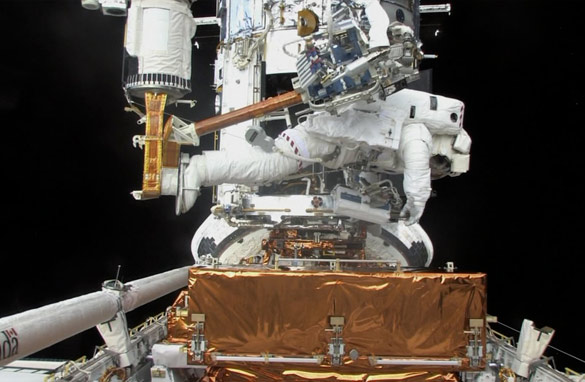 The president spoke Wednesday with the crew of the Space Shuttle Atlantis after the astronauts repaired the Hubble Telescope during several spacewalks. (Photo Credit: NASA)

(CNN) - President Barack Obama beamed up a special message to the crew of the Space Shuttle Atlantis on Wednesday, two days before the astronauts are scheduled to return to Earth.

"I wanted to tell you personally how proud I am," Obama said in a brief phone chat. "I think you're just providing a wonderful example of the kind of commitment to exploration that represents America."

Atlantis launched May 11 for NASA's fifth and final repair visit to the Hubble Space Telescope. It was released back into orbit Tuesday morning.

In space for 19 years, the Hubble can capture clear images that telescopes on Earth cannot, partly because it does not have to gaze through murky atmosphere.

Obama said it was amazing to watch the astronauts do their work and called the Hubble "an iconic symbol of the quest for knowledge."

"By allowing Hubble to continue on its journey, you've really allowed all of us to continue on our journey for growth and exploration."
END_OF_DOCUMENT_TOKEN_TO_BE_REPLACED

WASHINGTON (CNN) - Chris Kennedy, the son of the late Robert F. Kennedy, is taking steps to run for Senate and could announce his candidacy as early as next week, a source close to the Kennedy family told CNN Wednesday.

"He is building an organization and telling family and friends that he is in fact going to be a candidate for the Senate from Illinois," said the source, who spoke on the condition of anonymity this person was not authorized to speak publicly about the matter.

A spokeswoman for Chris Kennedy, an Illinois businessman, would not go as far as to say he is in the race, but acknowledged that he is "seriously considering" a Senate bid.

"He has conducted polling which indicates a strong interest," said Kasey Madden, Kennedy's spokeswoman. "But there is no timeline for a decision or an announcement."

But a second source, an Illinois Democrat also speaking on the condition of anonymity, told CNN that Kennedy's political allies are telling state Democrats that he will indeed seek the Democratic nomination for the seat once held by President Obama.
END_OF_DOCUMENT_TOKEN_TO_BE_REPLACED

(CNN) - Newt Gingrich is calling on House Speaker Nancy Pelosi to resign her leadership post Tuesday, days after deriding the California Democrat as a "trivial politician" over her description of what the CIA has told her about aggressive government interrogation techniques.

In a column for the conservative publication Human Events, the former House Speaker takes aim at Pelosi's press conference last week, during which she said the CIA did not tell her in 2002 that it used the aggressive interrogation technique of waterboarding. She went on to allege the CIA routinely misleads Congress.

"She charged that the CIA, deliberately and as a matter of policy, violated the law by lying to Congress," Gingrich writes in the column. "And with that allegation, Speaker Pelosi disqualified herself from the office she holds."

"Speaker Pelosi has damaged America's safety," Gingrich also writes. "She's made America less secure by sending a signal to the men and women defending our country that they can't count on their leaders to defend them."

In an interview on ABC Wednesday, Gingrich elaborated on his comments, saying CIA agents aren't likely to trust Pelosi with sensitive information going forward given her allegation.

"If you were a CIA agent today and you were told to brief Nancy Pelosi, how could you have any sense of confidence in telling her anything?" Gingrich said.

"This is an ethically challenged former Speaker of the House who is out to sell books," the aide said.

Congressional Democrats on Tuesday also appeared to rally behind Pelosi, with her No. 2, Maryland Rep. Steny Hoyer, saying he believes the speaker is being truthful in her statements about 7-year-old briefings.

"Republicans are going to stay on it as long as you guys keep printing it, as long as it continues to be a television item – not about the substance, but about the distraction," Hoyer told reporters Wednesday. "As long as you want to feed on it, the Republicans will continue to feed you."

END_OF_DOCUMENT_TOKEN_TO_BE_REPLACED

The comments came hours after Powell fired back at Limbaugh and former Vice President Dick Cheney over recent remarks questioning his GOP credentials.

Powell drew ire from many in the GOP for his decision to endorse President Obama's candidacy, and said earlier this month that the party would be better off without Limbaugh.

On his show Wednesday, Limbaugh mocked Powell's comments. "And now there's an agenda, an emerging agenda, that he's waiting for for the Republican Party?" said the radio host. "The only thing emerging here is Colin Powell's ego. Colin Powell represents the stale, the old, the worn-out GOP that never won anything."

Limbaugh, who has been called the de facto leader of the Republican Party by leading Democrats, also said that he is resigning from the position.

The wording of the resolution was tweaked to strike controversial language that would have called on Democrats to rename themselves the "Democrat Socialist party." That proposal was criticized by some members of the RNC, including party chairman Michael Steele, as embarrassing and counterproductive.

The language was changed so that RNC members "wouldn't have to fight about it," according to one of the resolution's original sponsors.

The 13-point "resolution recognizing the Democrats' march towards socialism," criticizes President Obama and the Democratic-controlled Congress for passing a $787 billion stimulus package and favoring "massive government bailouts" of the financial, health care and mortgage industries.

END_OF_DOCUMENT_TOKEN_TO_BE_REPLACED

(CNN) - New Hampshire's move to become the most recent state to legalize same-sex marriage hit a road bump Wednesday, after the legislature's House of Representatives failed to agree to changes made by the governor.

Both the House and Senate already had approved allowing gay couples to marry.

But Gov. John Lynch, a three-term Democrat, said last week he would sign a same-sex marriage bill only if it provides "the strongest and clearest protections for religious institutions and associations, and for the individuals working with such institutions."

Lynch said any such measure needs to "make clear that (clergy and other religious officials) cannot be forced to act in ways that violate their deeply held religious principles."

END_OF_DOCUMENT_TOKEN_TO_BE_REPLACED

Clinton calls for an end to Israeli settlement activity, urges Arabs to take steps towards peace

[cnn-photo-caption image= http://i2.cdn.turner.com/cnn/2009/images/04/27/art.hrccheek0427.gi.jpg caption="Secretary of State Hillary Clinton is calling on all sides to move toward Middle East peace. "]WASHINGTON (CNN) - Secretary of State Hillary Clinton said Wednesday Israel must halt settlement activity and Arab nations must move toward peace with Israel as the Obama administration prepares to lay out its vision for the Mideast.

"It is clear that the settlement activity has to cease," Clinton said in testimony before the Senate Foreign Relations Committee.

Her comments come on the heels of a visit to Washington this week by Israeli Prime Minister Benjamin Netanyahu and in advance of a visit next week by Palestinian President Mahmoud Abbas. Egyptian President Hosni Mubarak also was scheduled to visit Washington next week but postponed his trip Wednesday after the death of his grandson.

After the series of meetings, President Barack Obama is expected to lay out his vision for Mideast peace negotiations when he addresses the Muslim world in a speech in Cairo next month.

Clinton said that during Netanyahu's visit, she and Obama reaffirmed the administration's desire for a two-state solution and emphasized negotiations on a deal must must begin with an end to settlement activity.

END_OF_DOCUMENT_TOKEN_TO_BE_REPLACED

[cnn-photo-caption image= http://i2.cdn.turner.com/cnn/2009/images/05/20/art.candy0520.cnn.jpg caption="Candy Crowley will be honored in June for her outstanding political coverage during the 2008 election season."]WASHINGTON (CNN) - Next month, another member of the Best Political Team on Television will add an award to her already long list of honors.

Senior Political Correspondent Candy Crowley, along with CNN's Christiane Amanpour, will be among the honorees of the Women's Media Center's first annual Media Awards at the Sackler Foundation in New York on June 17.

Crowley is being honored by the WMC for her outstanding political coverage during the 2008 election.

The Women's Media Center was founded in 2005 by Gloria Steinem, Jane Fonda and Robin Morgan to promote women in the media.

In June, Crowley also will be accepting a Gracie Allen Award from AWRT for outstanding feature - hard news program for her coverage of Hillary Clinton's bid for the White House.