Biden: U.S. aid at risk if Lebanon strays from 'principles'

He spoke shortly after arriving in Beirut, a visit that comes two weeks before a key vote there that could usher in a Hezbollah-dominated government.

"I do not come here to back any political party or any particular person," Biden said at a joint news conference with Lebanese President Michel Sleiman.

"The shape and composition of Lebanon's government is for the Lebanese people to decide, to state the obvious."

However, the United States "will evaluate the shape of our assistance programs based on the composition of the new government and the policies it advocates," Biden said.

Biden urged those Lebanese "who would think about standing with the spoilers of peace not to miss this opportunity to walk away from the spoilers."

First on The CNN Ticker: Obama court pick may come next week

[cnn-photo-caption image= http://i2.cdn.turner.com/cnn/2009/images/05/01/art.scotus0501.gi.jpg caption="The President may name his pick to replace Justice Souter as soon as Tuesday."] WASHINGTON (CNN) - A top aide to Senate Judiciary Chairman Patrick Leahy told fellow Democrats on Friday to get ready for President Obama's Supreme Court pick to come as early as next week, according to an e-mail obtained by CNN.

"It is possible the President will designate his nominee to the Supreme Court as early as next Tuesday or some time next week," Jeremy Paris, Leahy's chief counsel for nominations, wrote in the e-mail to fellow Democratic aides.

The Judiciary panel will handle the nomination process for whomever Obama picks to replace retiring Justice David Souter, and three senior Obama administration officials confirmed to CNN that the latest thinking at the White House is the president could make the pick as early as next week.

The White House's new point person for managing the process for the eventual nominee, Stephanie Cutter, was also spotted in the West Wing on Friday afternoon meeting with other aides, a sign the administration could be edging closer to announcing the pick.

But the three senior administration officials said flatly the president has not yet settled on his pick, and they noted this weekend would be pivotal in the decision-making process. "He's mulling it over," one top aide said of the final stages of the process.

END_OF_DOCUMENT_TOKEN_TO_BE_REPLACED

Kasich has already filed paperwork with the state that allows him to raise money, established a Web site and posted a YouTube video encouraging supporters to join him at a June 1 event in his hometown for a "very special announcement." Kasich has not yet officially announced his plans to challenge Democratic Gov. Ted Strickland in 2010.

"Really like to see you there," Kasich said in the video. "Hope you can make it. I am excited. I hope you will be too."

In a head-to-head match-up, Strickland holds a 19 point lead over Kasich, 51 percent to 32 percent, according to a May 6 Quinnipiac University poll.

Gibbs quickly followed up he was joking.

During a bill-signing ceremony at the White House, President Obama praised the new law, which was the culmination of several years of work by consumer groups and Democrats to rein in what they say are abusive practices that prey on consumers.

"We're here today for a bill that will make a big difference," said Obama.

Obama was joined by, among others, the bill's Democratic sponsors: Sen. Chris Dodd of Connecticut and Rep. Carolyn Maloney of New York. Sen. Richard Shelby of Alabama, a top Senate Republican who negotiated a final deal to pass the bill, also attended.

The House and Senate passed the legislation by overwhelming bipartisan margins earlier this week, despite strong objections by banking industry advocates who say it could result in tightened credit to Americans. 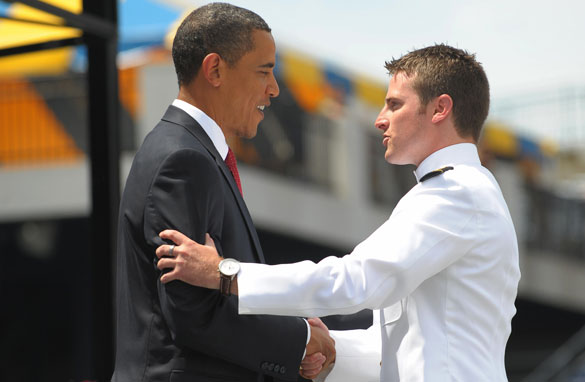 (CNN) - President Obama stood Friday before the graduates of the Naval Academy and made a vow that reflected the criticisms of the previous administration that filled much of his presidential campaign.

"It's a promise that as long as I am your Commander in Chief, I will only send you into harm's way when it is absolutely necessary, and with the strategy, the well-defined goals, the equipment and the support that you need to get the job done," he told the crowd in Annapolis, Maryland.

"This includes the job of bringing the Iraq war to a responsible end and pursuing a new comprehensive strategy to disrupt, dismantle and defeat al Qaeda and its allies in Afghanistan and Pakistan."

He noted that the government has "halted reductions in Navy personnel and increased the size of the Marine Corps," and he said, "we will maintain America's military dominance and keep you the finest fighting force the world has ever seen."

First on The CNN Ticker: Ridge disagrees with Cheney

"Yeah, I disagree with Dick Cheney," the Pennsylvania Republican and former Bush administration official told CNN's John King, adding he does not think the country is more vulnerable to an attack under President Obama.

Ridge's comments come after both Obama and Cheney gave dueling speeches on national security, during which the president sharply condemned Bush administration interrogation practices while Cheney vigorously defended them.

In the interview with CNN, set to air in full on State of The Union with John King Sunday, Ridge said he disagrees with "the approach both men are taking."

"It's just the whole notion of a Republican vice president giving a speech after the incumbent Democratic president," he said. "It's gotta go beyond the politics of either party."

The former Pennsylvania governor also took issue with a portion of Obama's speech, during which he said some Bush national security decisions were based on "fear, rather than foresight."

END_OF_DOCUMENT_TOKEN_TO_BE_REPLACED

WASHINGTON (CNN) - How high will gas prices soar this summer?

A new national poll suggests that nine out of ten Americans think prices at the pumps will top $3 some time this year, and nearly three out of four feel that gas could cost up to $4 a gallon this summer.

Only 27 percent of people questioned in the CNN/Opinion Research Corporation survey think they'll pay $5 a gallon some time this year. The poll's Friday afternoon release comes at the start of the Memorial Day holiday weekend, which is the traditional kickoff of the summer driving season.

The national average price for a gallon of regular unleaded gasoline stood at $2.39 on Friday, according to motorist group AAA. Even though gas has jumped by 30 cents a gallon over the past month, it's still far below last summer's $4-a-gallon prices.

The CNN/Opinion Research Corporation poll was conducted May 14-17, with 1,010 adult Americans questioned by telephone. The survey's sampling error is plus or minus three percentage points.

CNN Poll: 7 out of 10 say things going badly in country

WASHINGTON (CNN) - A new national poll suggests Americans are becoming slightly more positive about the condition of the country, but the vast majority still say things in the nation are going badly.

"This poll question has a record of being a good political indicator," said CNN Senior Political Analyst Bill Schneider. "When the number of Americans who say things are going well is this low, bad things happen to people in power. In 1980, President Jimmy Carter was thrown out of office. In 1992, the same thing happened to the first President Bush. And last year the Republican got wiped out."

The poll also indicates that 42 percent of people questioned think the country's in a serious recession, up 10 points from last October. Another 35 percent said the nation's suffering from a moderate recession and 12 percent labeled it a mild recession. One out of 10 said there's no recession.

END_OF_DOCUMENT_TOKEN_TO_BE_REPLACED

[cnn-photo-caption image= http://i2.cdn.turner.com/cnn/2009/images/05/22/art.vacation.jpg caption=" Join the conversation on Jack's blog."]
As millions of Americans head into a long weekend and the unofficial start of summer, consider this: About 28 million Americans, that's a quarter of the work force, don't get any paid vacation. Enter Florida Congressman Alan Grayson - who has introduced the Paid Vacation Act.

Grayson, a Democrat, says his bill would double the number of paid vacations in the U.S. It’s also meant to increase worker productivity by having fewer sick days, and to boost tourism - hey, he's from Florida after all.