WASHINGTON (CNN) - Despite an earlier announcement from a California Republican womens group, former Alaska Governor Sarah Palin will not be speaking to an event sponsored by the group scheduled for next weekend at the Ronald Reagan Presidential Library, a spokeswoman for her political action committee said Thursday night.

“As repeatedly stated to several in the media over the last week, former Governor Sarah Palin is not committed to attend the Simi Valley Republican Women’s event at the Reagan Library and in fact is not attending the event,” read a statement from Meghan Stapleton that was posted on Palin‘s Facebook site.

“Neither the Governor’s state staff nor SarahPAC has ever committed to attending this event or speaking at this event, and even requested that the Governor's name be removed from the invitation several weeks ago.”

Stapleton said Palin “has other work and commitments to take care of at that time” without elaborating.

A representative of the Republican Women of Simi Valley, which bills itself as a non-profit group of volunteers, told CNN she had no comment about Palin’s statement. When asked if she knew who from Palin’s staff had accepted the invitation, she again said she had no comment.

In a statement released earlier this month, the group said the Saturday August 8th event, meant to commemorate the group‘s anniversary, said Palin was one of several scheduled speakers and was “slated to attend.”

“Sarah Palin loves Alaska & she has roots in southern California and our organization is very supportive of the troops! Palin also has a huge following in California, mostly folks who pay tribute to the Reagan legacy,” said Pat Saraceno, hospitality chair for the group. “Most of us view Palin as a ‘Reaganesque figure.”

[cnn-photo-caption image= http://i2.cdn.turner.com/cnn/2009/images/07/30/art.obama0730.gi.jpg caption="A CNN Poll of Polls out Thursday indicates that 54 percent of Americans approve of President Obama."]WASHINGTON (CNN) - It's late July, a time for hot and humid weather in the nation's capital. But when it comes to President Barack Obama's approval rating, an average of the most recent national surveys indicates a cooling trend.

According to a new CNN Poll of Polls, 54 percent of Americans approve of how Obama is handling his duties in the White House. That's down 7 points from late June, when the president's approval rating stood at 61 percent. The latest approval rating is the lowest for Obama in his young presidency. The CNN Poll of Polls, compiled and released Thursday, is an average of seven national surveys conducted over the past nine days.

It appears a drop in Obama's numbers on health care and the economy, the two issues that have dominated his domestic agenda since he took office in January, are contributing to the deterioration of his overall approval rating.

A CNN Poll of Polls of the five surveys that specifically asked about how Obama's handing the economy indicates that 48 percent approve and 45 percent disapprove.

END_OF_DOCUMENT_TOKEN_TO_BE_REPLACED

“I am thankful to Professor Gates and Sergeant Crowley for joining me at the White House this evening for a friendly, thoughtful conversation. Even before we sat down for the beer, I learned that the two gentlemen spent some time together listening to one another, which is a testament to them. I have always believed that what brings us together is stronger than what pulls us apart. I am confident that has happened here tonight, and I am hopeful that all of us are able to draw this positive lesson from this episode.”

[cnn-photo-caption image= http://i2.cdn.turner.com/cnn/2009/images/07/30/art.kirktweet.twitter.jpg
caption = " Rep. Mark Kirk's tweets raised questions from the military. "]WASHINGTON (CNN) - Rep. Mark Kirk, a Republican who represents the northern suburbs of Chicago and is running for Senate, also happens to be a Navy Reservist. While on service in the National Military Command Center at the Pentagon, he recently 'tweeted,' causing the Military to look into the situation.

The first tweet sent on July 25 read: "On duty @ the Pentagon's National Military Command Center. All is currently (relatively) quiet. Honor 2 be back w/ my fellow Navy colleagues."

The next day he wrote: "Back on duty in the National Military Command Center – lets hope for a calm day for our troops."

END_OF_DOCUMENT_TOKEN_TO_BE_REPLACED 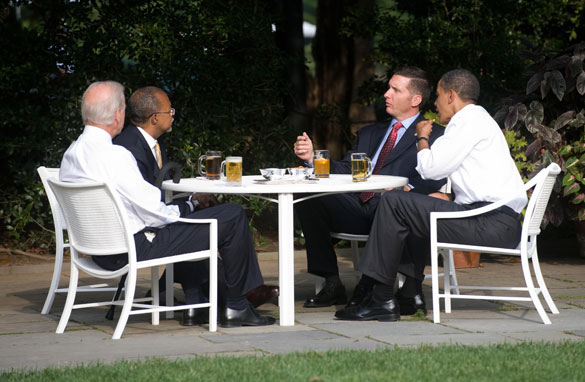 The GOP's fresh face from Minnesota

Unlike fellow Republican Sarah Palin, Pawlenty is not new to national politics. He is a two-term governor, former head of the National Governors Association, and was on the short list to be Sen. John McCain's vice presidential running mate in 2008.

But Pawlenty is still relatively unknown, even within his own party.

END_OF_DOCUMENT_TOKEN_TO_BE_REPLACED

[cnn-photo-caption image= http://i2.cdn.turner.com/cnn/2009/images/06/18/art.pelosihand0618.gi.jpg caption="House Speaker Nancy Pelosi called the insurance industry 'the villians' in the Democrat's push to reform health care."]WASHINGTON (CNN) - As Congress prepares to head into a monthlong August recess, Democratic leaders on Capitol Hill ripped into the insurance industry, framing the health care debate as a battle against insurers.

"They are the villains in this," Speaker Nancy Pelosi told reporters. She labeled industry practices as "immoral."

Pelosi predicted that as members go to their districts next month and explain the Democrats' health care plan, it will pick up support. But she pointed directly at insurers as standing in the way of health care reform, highlighting their opposition to having a government-run plan compete with private insurers.

"They are doing everything in their power to stop a public option from happening, and the public has to know that," she said.

END_OF_DOCUMENT_TOKEN_TO_BE_REPLACED

WASHINGTON (CNN) - The giveaway was when they started calling him "Barack."

It was jarring, at first, to hear many in this group of 12 independent voters refer to their new president by his first name. But the more they talked, the more it made sense. After all, they are seeing a lot of him.

And they like it - or at least they like him. "There's a sense of intimacy, or relationship, that was there," says Democratic pollster Peter Hart, who conducted the focus group in Towson, Maryland, on Wednesday night. "[It shows] how unbelievably powerful his personal presence is. ... Don't get fooled by numbers alone. Something is stronger here."

So while the president's poll numbers start to dip, these dozen independents - including four McCain supporters and a lone Nader voter - are giving the president some leeway. They feel like they know him, and that he's "honest,' as one put it. And while they say the country is "broke," "worried" and "confused, they're not blaming Barack. If anything, they seem invested in his success.

Sixteen to get Presidential Medal of Freedom

[cnn-photo-caption image= http://i2.cdn.turner.com/cnn/2009/images/07/30/art.boteddy0730.gi.jpg caption="Sen. Kennedy is one of the 16 recipients of the Presidential Medal of Freedom named by the White House Thursday."]
WASHINGTON (CNN) - The White House announced Thursday the 16 recipients of this year's Presidential Medal of Freedom, who include researchers, activists and athletes.

Recipients "make an especially meritorious contribution to the security or national interests of the United States, world peace, cultural or other significant public or private endeavors," the White House said in a written statement.

"Their relentless devotion to breaking down barriers and lifting up their fellow citizens sets a standard to which we all should strive," said President Barack Obama in the statement.

[cnn-photo-caption image= http://i2.cdn.turner.com/cnn/2009/images/07/30/art.pawlenty0730.gi.jpg caption="Tim Pawlenty on Thursday sidestepped questions about his 2012 White House ambitions."](CNN) - Minnesota Gov. Tim Pawlenty is still sidestepping questions about his White House ambitions – feeding speculation that has surged in the wake of his decision not to seek a third gubernatorial term next year.

"Well, I've got a year and a half left to be a governor of the state of Minnesota and that's going to be the focus of my attention," he told CNN Anchor Wolf Blitzer in the Situation Room Thursday after being asked whether he was planning a presidential run.

"But I am in Minnesota and elsewhere going to try to speak to how my party can do a better job. Obviously we got our tails kicked in the last two elections, Wolf, we need to do a better job. I think I've got some ideas to share but that's really going to be focused on how we can do better in 2010, I'm not thinking beyond that."

Pawlenty, who will take the center stage with party leaders this week at the Republican National Committee Summer Meeting, has taken on a progressively higher profile over the past few months.

The Minnesota governor, named vice chair of the Republican Governors Association this summer in the wake of South Carolina Gov. Mark Sanford's resignation of the top spot, has emerged as a major critic of the president's health care reform plan, blasting it this week in a letter to Minnesota's congressional delegation.

Earlier this week, he raised eyebrows when he also took a swipe at the health care plan Massachusetts launched under then-Gov. Mitt Romney, a potential 2012 presidential rival.