Will 'beer summit' quench thirst for harmony or go flat?

WASHINGTON (CNN) - White House spokesman Robert Gibbs is trying to downplay expectations for Thursday night's "Beer Summit", saying President Obama "is not going to announce anything" in terms of new initiatives to address racial profiling and will not address reporters when they are briefly let in to take pictures of the confab.

Gibbs said Obama simply hopes "this will help foster a dialogue" by bringing together the president's friend, Harvard professor Henry Louis Gates, Jr., and the man who arrested him, Sgt. Jim Crowley of the Cambridge, Massachusetts police department, over a few beers.

Gibbs added that the president will not engage Gates and Crowley in questions about what happened on the night of the incident. "This is not an after-action report," he said.

Instead, the summit is planned to be held in a more casual setting, with White House aides revealing that Crowley and Gates will be bringing their family members for the meeting at the picnic table on the South Lawn of the White House.

The deal between four fiscally conservative congressmen - part of the so-called "Blue Dog" coalition - and the chamber's Democratic leadership allowed debate to resume Wednesday in the critical House Energy and Commerce Committee.

A full House vote on the health care plan has been delayed until after the August congressional recess in part because the committee's fiscal conservatives had threatened to defeat the bill if several of their concerns were not addressed.

The Energy and Commerce Committee is the last of three committees required to clear the bill before it can be considered by the full House.

Pelosi told Capitol Hill reporters that she is "okay" with language instructing the Health and Human Services secretary to negotiate reimbursement rates for doctors and hospitals under a government-run health care option.

END_OF_DOCUMENT_TOKEN_TO_BE_REPLACED

[cnn-photo-caption image= http://i2.cdn.turner.com/cnn/2009/images/07/29/art.beer.gi.jpg caption="What beer should be served at the Obama-Gates-Crowley get together?"](CNN) - The upcoming White House meeting with Henry Louis Gates, Jr., and the Cambridge police officer who arrested him earlier this month appears to have touched off a fresh debate all on its own: what kind of beer should be served?

Earlier this week the White House indicated each man would drink the beer of their choice - Bud Light for President Obama, Blue Moon for the police officer, and perhaps Red Stripe or Beck's for Gates.

But one Massachusetts congressman thinks another beer entirely should be served: Boston's own Sam Adams.

In a letter to Obama dated Wednesday, Massachusetts Rep. Richard Neal strongly urges the president not to drink Budweiser, now owned by a Belgian company. Nor should the White House consider serving Miller or Coors, Neal writes, both owned by a United Kingdom conglomerate.

Instead, the White House should serve the three men - all with ties to Massachusetts - the local favorite, not only because of its popularity in the region but also because it remains the largest American-owned and brewed beer, Neal says.

But Sam Adams founder and brewer Jim Koch told NPR if it was up to him he would make a special beer just for the event.

"I'd make a blend of ingredients from all over the world. Which is certainly what's represented there with the three participants," he said. "I would blend those ingredients together artfully and harmoniously, because that's really what we all hope for."

END_OF_DOCUMENT_TOKEN_TO_BE_REPLACED

A federal grand jury indicted Jefferson on June 4, 2007, on corruption charges after federal agents said they found $90,000 in his freezer. Authorities said the money was part of a payment in marked bills from an FBI informant in a transaction captured on video.

Jefferson, 62, was accused of using his office to solicit and receive more than $500,000 in bribes for himself and his family in exchange for promoting products and services to countries in Africa.

The Democrat pleaded not guilty to 16 counts of racketeering, money laundering, obstruction of justice and violations of the Foreign Corrupt Practices Act.

END_OF_DOCUMENT_TOKEN_TO_BE_REPLACED

Posted by
CNN Correspondent Jim Acosta
Click to watch video
WASHINGTON (CNN) - President Obama talks often about all of the forces lining up against his health care plan. But there's one critic who has remained relatively mum in the debate.

David Scheiner, a Chicago, Illinois-based doctor, has taken a hard look at the president's prescription for health care reform and sees bad medicine.

"This isn't that kind of health care plan that's going to work," he said.

So what makes Scheiner so special? He was Obama's personal physician for 22 years, and voted for the former Illinois senator in the 2008 presidential election.

No. 3 Republican in the Senate backs Sotomayor

WASHINGTON (CNN) - Tennessee Sen. Lamar Alexander said Thursday he would vote in favor of Judge Sonia Sotomayor's nomination to the Supreme Court - the sixth Republican, and the first member of GOP congressional leadership, to back President Obama's nominee.

Full statement as released by the senator's office:

Statement of U.S. Senator Lamar Alexander on the Nomination of Judge Sonia Sotomayor to Serve as Associate Justice of the U.S. Supreme Court

July 30th, 2009 – WASHINGTON – U.S. Senator Lamar Alexander (R-Tenn.) today made the following remarks on the floor of the U.S. Senate on the nomination of Judge Sonia Sotomayor to serve as Associate Justice of the U.S. Supreme Court:

"Mr. President, I have a statement to make about the President’s nomination of Judge Sonia Sotomayor to be Associate Justice of the United States Supreme Court.

“Even though Judge Sotomayor’s political and judicial philosophy may be different than mine, especially regarding Second Amendments rights, I will vote to confirm her because she is well qualified by experience, temperament, character and intellect to serve as an Associate Justice of the United States Supreme Court.

END_OF_DOCUMENT_TOKEN_TO_BE_REPLACED

[cnn-photo-caption image= http://i2.cdn.turner.com/cnn/2009/POLITICS/07/30/obama.roles/art.obama.role.gi.jpg caption="President Obama's likeability is key to his leadership, experts say."]
(CNN) - As President Obama pushes forward with his agenda, he may find that a homecoming king's likeability is just as integral as the power and authority inherent to the Oval Office.

"I just don't think you can be effective without being liked," said Bruce Newman, a professor of marketing at DePaul University and editor of the Journal of Political Marketing.

Newman describes Obama's leadership as a "two-pronged support system of both being popular but yet having the respect."

"I don't think you can be effective without that first step of making that emotional connection with the voter, but to continue to be effective, it's not enough," he said.

Newman pointed to three recent examples of presidential candidates who lacked the appeal of their opponent: Bob Dole vs. Bill Clinton, John Kerry vs. George W. Bush, and John McCain vs. Obama.

"We are looking for leaders that we could relate to, that we would like to have dinner with or have a beer with or a glass of wine with," he added.

Obama has been likened to Republican President Ronald Reagan, who was generally considered more popular than his policies at the start of his first term. 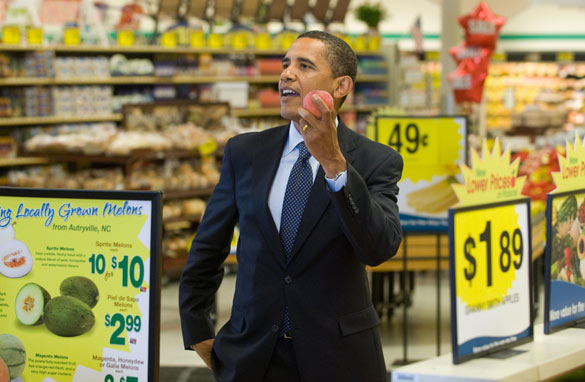 Pawlenty increasing profile as he looks at 2012

[cnn-photo-caption image= http://i2.cdn.turner.com/cnn/2009/images/07/30/art.tpawsotu0730.cnn.jpg caption="Minnesota Republican Gov. Tim Pawlenty is raising his national profile."]
SAN DIEGO, California (CNN) - Minnesota Gov. Tim Pawlenty will sharply criticize President Obama in a speech to national Republicans Thursday in what is being viewed as a step towards a potential presidential run in 2012.

Pawlenty will take Obama to task for his approach to reforming the nation's health care system as well as the president's efforts to revive the ailing economy, a source close to the governor told CNN.

The source added that Pawlenty's address to the Republican National Committee Summer Meeting will give him an opportunity to "introduce himself" to these GOP leaders.

Pawlenty was said to be on the short list in 2008 to be Sen. John McCain's vice presidential running mate, and he was recently named to a leadership position in the Republican Governors Association.

CNN: Senators: No health care deal until recess is over
Two of the three Senate Republicans negotiating a bipartisan deal on health care reform said they consider an agreement out of reach before the Senate goes on its August recess.

CNN: Lee raises 'concerns' over Blue Dog deal
The deal Democratic House leaders struck with a group of conservative Blue Dogs Democrats Wednesday was not embraced by one leading liberal House Democrat: Rep. Barbara Lee, D-California, chairwoman of the Congressional Black Caucus. "I have a lot of concerns," she told reporters Wednesday.