[cnn-photo-caption image= http://i2.cdn.turner.com/cnn/2009/POLITICS/07/07/sanford.future/art.sanford.cnn.jpg caption="Sanford flew in style on two international flights in 2006 and 2007."](CNN) - South Carolina Gov. Mark Sanford defended his trips on expensive international flights on Tuesday and said that a state Senate probe into his foreign travel is driven by a politically-motivated "feeding frenzy."

Sanford also told reporters that he and his wife Jenny - who moved out of the governor's mansion in Columbia last week - are not getting a divorce.

Sanford's travel has come under increased scrutiny since he admitted an extramarital affair with an Argentine woman in June. A state law enforcement probe in June found that the governor did not use state money while carrying on his affair.

But on Monday, Republican state Sen. David Thomas concluded an investigation that found Sanford violated South Carolina regulations by billing the state for business and first-class seats on international flights during trade missions in 2006 and 2007. South Carolina law requires state officials to purchase seats for the lowest available fare. Thomas told CNN that Sanford's actions could be grounds for impeachment when the legislative session begins in January.

Sanford, speaking to reporters after a cabinet meeting Tuesday, said that the state Department of Commerce purchases tickets and argued that other South Carolina governors had flown business and first class when traveling overseas in the past. He said that if Thomas was really concerned about his travel practices, he should have called the governor's office instead of simply releasing the results of his investigation to the media.

"I did wrong, I messed up and there are consequences for that," Sanford said, referring to his affair. "But at some point it gets to the point of the absurd, where in political terms people smell blood in the water, and they keep coming and coming and coming."

END_OF_DOCUMENT_TOKEN_TO_BE_REPLACED

[cnn-photo-caption image= http://i2.cdn.turner.com/cnn/2009/POLITICS/05/06/liberal.republicans/art.specter.gi.jpg caption="Pennsylvania Sen. Arlen Specter's brought Capitol Hill police to his rowdy town halls on Tuesday."]Lewisburg, Pennsylvania (CNN) - Tough crowds asking pointed questions is not the only concern Sen. Arlen Specter has as he holds town halls all across his home state of Pennsylvania.

He's also concerned about his personal safety, which is why he brought along some United States Capitol Hill Police officers as he traveled to two town halls on Tuesday.

The sometime raucous events in Lebanon and Lewisburg, which Specter called "civil," were largely full of constituents expressing their anger over the health care plan working its way through Congress.

The Democrat earlier this year switched parties and could face a tough re-election fight next year.

After his town hall event at the campus of Bucknell University in Lewisburg, Specter defended his decision to have Congress' special police force travel with him back home.

"I would say, that given the temper of the times, the fact that in some areas there have been fights breaking out and people hospitalized - and one member's statue was hanged in effigy - [safety] is a big challenge," said Specter.

END_OF_DOCUMENT_TOKEN_TO_BE_REPLACED

CNN Poll: Majority have a favorable view of Sen. Kennedy

The survey of 1,136 adult Americans conducted by telephone on July 31-August 3, 2009 and has a margin of error of plus or minus three percentage points.
Kennedy's sister, Eunice Kennedy Shriver, died early Tuesday morning. He has been absent for much of the 111th Congress, because he is battling brain cancer.

Dodd recently revealed that he had been diagnosed with early stage prostate cancer. His doctor described the surgery as "successful," adding that the Connecticut Democrat "is expected to be in the hospital for a few days."

"It is anticipated that he will be able to return to full activity within a few weeks," Dr. Peter Scardino, chairman of the Department of Surgery at Memorial Sloan-Kettering Cancer Center, said in the statement released by Dodd's office.

[cnn-photo-caption image= http://i2.cdn.turner.com/cnn/2009/images/08/11/art.nelson0811.yt.jpg caption="Liberal groups said Tuesday that they will continue to target Democrat Ben Nelson of Nebraska even after the senator put out an ad defending his views on health care reform."]
WASHINGTON (CNN) – Liberal critics of Sen. Ben Nelson's position on health care reform sent out a new plea Tuesday asking for financial help in keeping a statewide television commercial that targets the Nebraska Democrat on the air.

For the past week, the Progressive Change Campaign Committee and Democracy for America have run a 60 second ad on Nebraska cable in an effort to pressure Nelson to embrace President Obama's approach to health care reform. This week, the organizations moved the commercial to local broadcast stations in Nebraska and Nelson, himself, has begun airing his own 30 second commercial to explain his position on health care reform.

"Ben Nelson's new ad says nothing about the public option, and for good reason –Nelson's efforts to undermine the public option are out of step with the overwhelming majority of Americans, including many rural voters and even Republicans," Adam Green, co-founder of the Progressive Change Campaign Committee said in an email to CNN.

"We'll keep holding Nelson accountable until he bucks his special interest contributors and supports a public health insurance option for his constituents."

Cafferty: Are you interested in Palin's views on health care reform?

In comments on her Facebook page, the former governor of Alaska (who quit in the middle of her first term) says there are many "disturbing details" in the health care bill, but that "we must stick to a discussion of the issues and not get sidetracked by tactics that can be accused of leading to intimidation or harassment."

Palin suggests the disruptive protests "diminish our nation's civil discourse", and says opponents shouldn't give supporters of health care reform any reason to criticize them.

This is the same woman who a few days ago was spreading a false claim that Pres. Obama would force the elderly and disabled to appear before a "death panel." She said a group of bureaucrats would get to decide whether people like her parents and her son, who has Down Syndrome, could get health care.

There's no such provision in the bill. Gee, do you suppose she didn't read it? Rather, a House committee passed a provision that would let Medicare reimburse seniors who want counseling on end-of-life issues. Once again, Sarah Palin's version of reality is at odds with reality.

Whatever the reason, Palin backed down. See, she wasn't getting much support. Several Republican governors distanced themselves from her, either refusing to comment or saying Palin could "speak for herself." Not exactly the way to build that right-of-center coalition she keeps talking about. 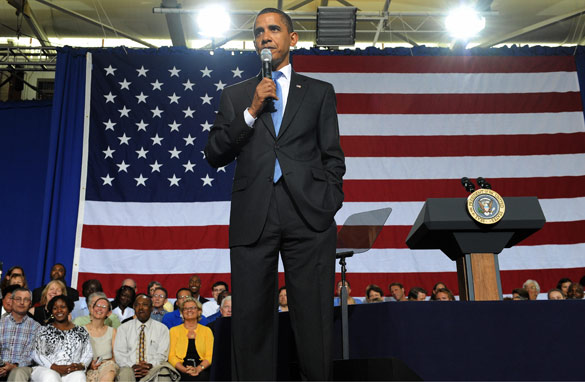 PORTSMOUTH, New Hampshire (CNN) - President Barack Obama complained Tuesday about opposition scare tactics against a proposed health-care overhaul, but said failing to fix problems in the current system would be the scariest outcome of all.

Obama and Democratic leaders have accused opponents of health-care changes of organizing protests intended to drown out the debate, while Republicans respond the public anger is a genuine response to what they call excessive and misguided legislation.

In New Hampshire, Obama welcomed a "vigorous" debate as part of the democratic process, but said people should talk "with each other and not over each other." He criticized "wild misrepresentations" by special interests trying to undermine health-care legislation before Congress.

In particular, Obama rejected rumors that a health-care bill passed by a House committee included setting up so-called "death panels" to decide if senior citizens get treatment. He called spreading such rumors a long-standing practice by opponents of health-care reform, such as "those who profit under the status quo."

"What is really scary, what is really risky, is to do nothing," Obama said, noting that premiums paid for health-care coverage were rising three times faster than wages and that the government-run Medicare program for senior citizens would run out of money within a decade.

In a new twist at such forums, Obama specifically asked for questions from opponents of health-care legislation to address issues of concern.
END_OF_DOCUMENT_TOKEN_TO_BE_REPLACED

He called the verdict "unjust" and said "thousands of other political prisoners in Burma [an alternate name for Myanmar]... have been denied their liberty because of their pursuit of a government that respects the will, rights, and aspirations of all Burmese citizens. They, too, should be freed."

Obama was joining a chorus of condemnation from figures ranging from the Dalai Lama to the U.N. secretary-general.
END_OF_DOCUMENT_TOKEN_TO_BE_REPLACED

Interest in Cash for Clunkers sputters

NEW YORK (CNNMoney.com) - After sparking an initial rush to showrooms, the Cash for Clunkers program seems to be running out of fuel.

Interest in Cash for Clunkers has fallen 15% since its peak, and car purchase intent could fall to pre-Clunkers levels by next week, an auto research group said Tuesday.

Under the Clunkers program, which launched July 27, vehicles purchased after July 1 are eligible for refund vouchers worth $3,500 to $4,500 on traded-in cars with a fuel economy rating of 18 miles per gallon or less.

The program proved wildly popular, running through its initial $1 billion in its first week and leading lawmakers to approve an additional $2 billion in funding on August 7.

But interest in the program peaked on July 29, and demand has waned, according to the report from Edmunds.com.
END_OF_DOCUMENT_TOKEN_TO_BE_REPLACED