Dodd released from hospital after surgery

“Senator Dodd was released from the hospital earlier today and is at home in East Haddam with his family,” Dodd spokesman Bryan DeAngelis said in the statement. “He is recovering well from Tuesday’s surgery and looks forward to getting back to work later this month on behalf of the people of Connecticut.”

Posted by
CNN's Emanuella Grinberg
Click to watch video
(CNN) - There is no "silver bullet" solution to health care overhaul, President Obama said on Saturday, but the system needs to change to avoid "a world of hurt" down the road.

"There is no perfect, painless silver bullet out there that solves everyone's problem, that gives everyone perfect health care for free. I wish there was," Obama said in a town hall meeting in Grand Junction, Colorado.

"I can't do it. Nobody can. What I can do is try to sort though what are all the options available, be realistic about where we're going on health care, say to myself if we keep on doing what we're doing, we're in a world of hurt."

If health care reform fails, Medicare and Medicaid risk going broke, state and federal budgets will be unsustainable, "and then we're going to have to make some really bad decisions where we have no good options," Obama said.

Obama's comments came in response to remarks from an audience member about the increasingly contentious tone the health care debate is taking, in Congress and in town hall meetings held by lawmakers around the country.

"Is it not time that something be done?" the man said.

In responding to the man's question, Obama also criticized opponents of health care overhaul, especially members of Congress who he said reduce the debate to scare tactics and mischaracterizations. 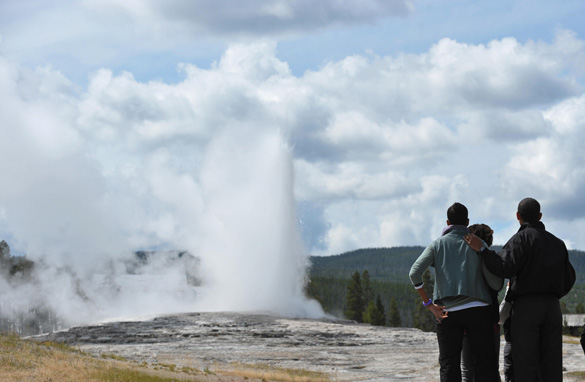 The first family looked on as Old Faithful erupted at Yellowstone National Park in Wyoming Saturday. The president has spent some time with his wife and two daughters while on a trip to the Mountain West this week to meet with voters during town hall events primarily focused on health care reform. (Photo Credit: Getty Images)

Sestak received 46 percent of the vote, while Specter got 10 percent, in this unscientific survey of 235 attendees who participated. Sestak is challenging Specter in the 2010 Pennsylvania Democratic primary.

Specter left the Republican Party earlier this year to became a Democrat.

The straw poll was conducted Aug. 13-14 at the conference by Greenberg Quinlan Rosner and Democracy Corps in conjunction with the Campaign for America’s Future.

Conservative online political activists and bloggers are also gathering in Pittsburgh for the 2009 RightOnline conference over the weekend.

(Read the text of President Obama's weekly address after the jump)

END_OF_DOCUMENT_TOKEN_TO_BE_REPLACED

Webb, who chairs the East Asia and Pacific Affairs Subcommittee of the Senate Foreign Relations Committee, will accompany Yettaw to Bangkok, Thailand, Sunday on a military aircraft, his office said.

It is the second success in a day for the Democrat from Virginia, who earlier held separate meetings with Suu Kyi and Myanmar's top official, junta leader Senior Gen. Than Shwe.

"It is my hope that we can take advantage of these gestures as a way to begin laying a foundation of goodwill and confidence-building in the future," Webb said in a statement.

(Read the text of the RNC's weekly radio and Web address delivered by Sen. Orrin Hatch after the jump)

END_OF_DOCUMENT_TOKEN_TO_BE_REPLACED

Begala calls Palin 'about half a whack job'

Begala was asked on CNN's "The Situation Room with Wolf Blitzer" to respond to a Politico story in which former House Speaker Newt Gingrich outlined several ways for Palin to repair her image.

Although Begala called Gingrich "a brilliant political strategist," he said giving advice to Palin is an exercise in futility.

"Here's the problem," said Begala, a CNN contributor. "He is trying to treat her like a serious person. She is not. OK? She is about half a whack job. She does not have the intellectual heft of Newt Gingrich or almost anyone else in the Republican Party, and I think she has proved that."

He continued: "I admire Newt Gingrich for pretending that she is a serious person. But Sarah Palin has proven herself to be flaky and an intellectual lightweight."

Conservative journalist Terry Jeffrey, appearing alongside Begala, defended Palin for having "rock solid principles." But he said Palin needs to be more aggressive in opposing the president's policies. At this point, Jeffrey said, "I think it's not proven" she can go toe-to-toe with President Obama.