Even though President Obama and national Democrats use Twitter – the social micro blog that everyone from Ashton Kutcher and Shaquille O'Neal to Chuck Grassley and Newt Gingrich often use to directly speak to followers – Republicans have embraced the technology. And with major policy issues being debated and the midterm elections right around the corner, liberal bloggers acknowledge the GOP has the upper hand when it comes to using 140 character messages known as "tweets" to influence the discussion.

"While it is obvious the progressive blogosphere is superior, we are being out-organized on Twitter," said Gina Cooper, a blogger who helped organize Netroots Nation, an annual gathering of online liberal activists that met last week in Pittsburgh. "There is some catching up to do on the progressive side."
END_OF_DOCUMENT_TOKEN_TO_BE_REPLACED

[cnn-photo-caption image= http://i2.cdn.turner.com/cnn/2009/images/08/21/art.ads.cnn.jpg caption="New health care ads on both sides of the debate are launching next week."](CNN) - The health care ad wars aren't letting up as the dog days of summer set in.

The new ads launching Friday will air in the swing districts of New York Rep. Mike Arcuri and Ohio Rep. Zack Space. NRCC spokesman Ken Spain declined to reveal the size of the ad buy but described it as "significant."

"President Obama and Nancy Pelosi are cooking up a risky experiment, on health care. Higher costs, tax hikes, and, get this, massive cuts to Medicare," versions of both ads state. Arcuri/Space already votes with Pelosi 90 percent of the time, now what do you think he'll do?"

Meanwhile, the liberal labor group Americans United for Change announced Friday it is launching a new ad on national cable next week that beats back at debunked claims about the Democrats' health care plans and spotlights what it calls "the real death panels that exist in America today."

"Their lies about phony Death Panels have all been proven false...unfortunately, there are real death panels in America," the announcer says, as footage is shown of 13-year old congressional testimony from a former Blue Cross/Blue Shield medical director who said she has denied patients potential life-saving surgeries.

Poll: Confidence in Obama drops; No gains for GOP 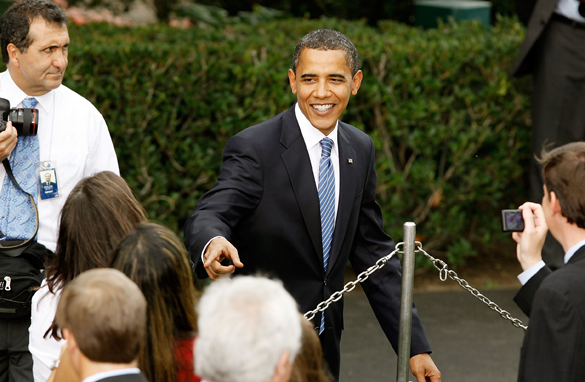 WASHINGTON (CNN) - A new poll suggests that Americans' faith in President Barack Obama to make the right decisions for the country is dropping.

Forty-nine percent of people questioned in a ABC/Washington Post survey released Friday say they have a great deal or good amount of confidence in the president's leadership, down 11 points from April. According to the poll, half of all Americans have little or no confidence in Obama's ability to make the right decisions, up ten points from April.

"This summer has been the season of discontent with all politicians," says CNN Polling Director Keating Holland. "The ABC/Washington Post poll indicates that Americans don't have confidence in the president or in Congress, and aren't confident about Democrats or Republicans."

According to the poll, 57 percent of Americans approve of the job Obama's doing as president, down two points from July. Four in ten disapprove, up three points from the 37 percent who disapproved of the president's performance in last month's survey by ABC/Washington Post.

END_OF_DOCUMENT_TOKEN_TO_BE_REPLACED

Pawlenty back in spotlight, again

The Minnesota governor is the keynote speaker Saturday night at a major dinner hosted by the Republican Party of Florida. The speech will be seen by many who cover national politics as the latest high profile step by Pawlenty toward a possible run for the 2012 GOP presidential nomination.

Last month, Pawlenty addressed top party members at a Republican National Committee conference in San Diego. In October, the Minnesota governor heads back to California, as a featured speaker at the Western Conservative Political Action Conference.

Earlier this summer, the two term governor announced he would not run next year for a third term, a move seen by many as a signal that Pawlenty is interested in running for the White House. Since that announcement, Pawlenty has stepped up his criticism of President Barack Obama.

END_OF_DOCUMENT_TOKEN_TO_BE_REPLACED

In a new book, Ridge says top Bush administration officials may have tried to raise the nation's terror alert for political reasons in the days before the 2004 presidential vote.

In response, Frances Townsend, a former Homeland Security adviser to President George W. Bush and now a CNN contributor, told CNN's "American Morning" that she believes Ridge is trying to profit by separating himself politically from Bush's record.

"You have to wonder if this is not just publicity meant to sell more books," Townsend said.

According to a new Quinnipiac University poll of Florida voters, the president's approval rating now stands at 47 percent in the Sunshine State, while 48 percent of voters there disapprove of the job he is doing.

Obama's approval in that key presidential swing state is now at a new low, and down more than 10 points from a similar survey conducted in June.

The poll also suggests the president's approval rating in Florida has largely been hurt by his aggressive push for health care reform: Only 38 percent of Florida voters believe his plan will improve the nation's healthcare system while 45 percent say it will hurt it.

END_OF_DOCUMENT_TOKEN_TO_BE_REPLACED

WASHINGTON (CNN) - Moderate Democratic Sen. Ben Nelson, a power broker in the health care negotiations, joins Ed Henry to discuss the latest developments in the debate that could determine the fate of President Obama’s domestic agenda.

Was Nelson pleased by the president’s decision to show more flexibility over a public option, and will this make it more likely that the senator will provide a pivotal swing vote in favor of health care reform this fall?

"An election-eve drama was being played out at the highest levels of our government" after Osama bin Laden released a pre-election message critical of President Bush, writes Ridge in his new book, The Test of Our Times.

Attorney General John Ashcroft and Secretary of Defense Donald Rumsfeld strongly advocated raising the security threat level to "orange" – even though Ridge believed a threatening message "should not be the sole reason to elevate the threat level."

END_OF_DOCUMENT_TOKEN_TO_BE_REPLACED

CNN: Ailing Kennedy wants replacement law changed
Sen. Edward Kennedy, who is battling brain cancer, is urging Massachusetts officials to change a law to allow for an immediate temporary replacement should a vacancy occur for one of his state's two Senate seats.

CNN: Kennedy letter followed discussions with Kerry, Frank
A source close to Ted Kennedy tells CNN that he decided to write his letter on how he believed a Senate vacancy should be filled after a series of private discussions in late June with Massachusetts colleagues and friends including Sen. John Kerry, Rep. Barney Frank and Rep. William Delahunt.

CNN: Obama says reform a 'matter of necessity'
President Obama took his health care message to talk radio Thursday, telling listeners of Philadelphia-based host Michael Smerconish that he wants to overhaul the nation's ailing health care system out of necessity rather than politics.