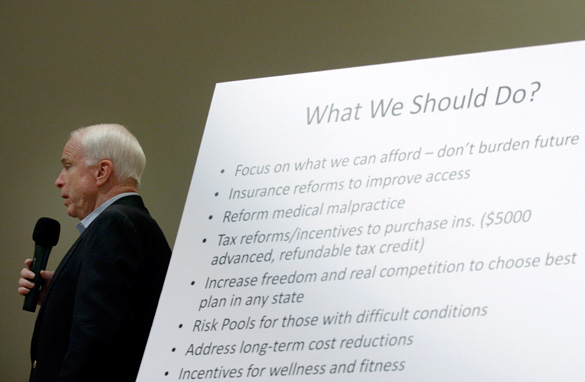 "I've seen involvement and engagement on the part of Americans that I have never seen the likes of which before," McCain said at a town hall in Phoenix, the first of eight such meetings he will hold around the state this week.

For more than an hour, the former GOP nominee alternated between cracking some well-worn jokes from his two presidential campaigns and listening to the concerns of his constituents, one of whom demanded that McCain "nuke" the health care plan entirely.

Though McCain firmly rejected the idea of a government-run insurance option, saying it would eventually drive private insurers out of business and lead to a full government takeover of health care, he echoed his 2008 campaign platform and said it would be irresponsible to simply "do nothing" - especially with the threat of Medicare and Social Security going broke.

"So let's go back with constructive, free-market incentives to improve the quality of health care and the affordability and availability," he said.

Later in the meeting, McCain was jeered when he insisted that Obama's views be respected despite his differing opinions on how to achieve reform.
END_OF_DOCUMENT_TOKEN_TO_BE_REPLACED

First on the Ticker: 'The writing is on the wall,' ally tells Sanford

Rep. Nathan Ballentine - a Sanford ally in the legislature - and Rep. Gerry Simrill met with Sanford in the South Carolina state House for about 40 minutes and warned him that unless he steps down, House Republicans are likely to impeach him.

“Barring some swing of momentum in his favor, I told him the writing is on the wall,” Ballentine told CNN. “I thought there could be a change in scenery and he could put an end to it all, but if he doesn’t, members of the House will take things into their hands.”

House Republicans are meeting this weekend in Myrtle Beach for their annual caucus retreat, and the impeachment matter is likely to dominate the agenda, according to those planning to attend.

Sanford has come under a new round of scrutiny after investigations into his travel expenses revealed that he spent thousands of dollars on business and first class airline tickets for overseas flights, and used state aircraft for personal and political travel. Those probes were prompted by Sanford’s disclosure in June that he had an affair with an Argentine woman.

Members of the House Judiciary Committee told CNN there are enough votes on the committee to send an impeachment motion to the floor of the House when the legislative session begins in January.

“I would be surprised if impeachment articles weren’t being drafted by someone,” said Rep. Jim Harrison, the Republican chairman of the Judiciary Committee.

END_OF_DOCUMENT_TOKEN_TO_BE_REPLACED

The minute-long spot, entitled "Fired Up," highlights Obama's appearance with Deeds at a rally in Northern Virginia earlier this month and suggests that Deeds is "cut from the same cloth" as the president, who last November became the first Democrat in 44 years to win Virginia.

The ad is airing on African-American radio stations in Hampton Roads, Richmond, Charlottesville and Roanoke.

END_OF_DOCUMENT_TOKEN_TO_BE_REPLACED

"It's bullsh*t. It's disgraceful. You wonder which side they're on," the Long Island Republican told Politico Tuesday.

On Monday, Attorney Gen. Eric Holder asked federal prosecutor John Durham to examine whether CIA interrogations of suspected terrorists were illegal in the months and years after the September 11 attacks.

Holder said he decided to expand Durham's mandate after examining reports from the Justice Department's Office of Professional Responsibility as well as a classified version of the 2004 CIA inspector general's report into questionable interrogation techniques, among other documents."

END_OF_DOCUMENT_TOKEN_TO_BE_REPLACED

[cnn-photo-caption image= http://i2.cdn.turner.com/cnn/2009/POLITICS/08/25/gloria.borger.cia/art.cia.gi.jpg caption="The Central Intelligence Agency is under fire for harsh interrogation techniques used after 9/11."]
Gloria Borger is a senior political analyst for CNN, appearing regularly on CNN's "The Situation Room," "Campbell Brown," "AC360°" and "State of the Union With John King," as well as special event coverage.

WASHINGTON (CNN) - No matter which way you look at it, the question is painfully difficult: What - if anything - do we do about the post 9/11 behavior of some CIA agents who worked feverishly to interrogate prisoners they believed had information that could save American lives?

First, we now know definitively what we always suspected - that agent actions were sometimes abusive, perhaps even illegal, as they tried to obtain information.

The just-released Justice Department report shows, among other things, that agents choked one detainee repeatedly and threatened to kill another prisoner's children. Not pretty stuff.

But here's what we also know, thanks to another report (purposefully) released by the CIA as a response to the Justice document: Some interrogations worked.

According to these agency reports, chronicling 2004 and 2005, the intelligence community gleaned valuable information in real-time - like tracking down a terrorist network and securing key information from the notorious Khalid Shaikh Mohammed, the 9/11 mastermind.

The CIA's message is clear: Whatever we did helped us get what we needed to save lives. So get off our backs and let us do our jobs.

But here's the catch, and it's what complicates all of this: The CIA report does not draw a straight line between any specific interrogation methods and success. Indeed, the report says the "effectiveness" of any particular interrogation technique in gaining star-quality information "cannot be so easily measured."

That is an understatement.

So it's easy to see why the president, who doesn't need another political headache, was happy to toss the hot potato over to Attorney General Eric Holder for review. Holder is independent, the president reminded us. He is supposed to make decisions about whether to prosecute criminal cases without the president. That notion could provide a smidgeon of political cover, but it looks like it won't be enough.

Republican on new media: You can teach an old dog new tricks

Roughly 60 House Republicans have joined the caucus, according to Latta's office. The group plans to sponsor staff briefings every four to eight weeks where Republican staffers will have the opportunity to meet with representatives of technology companies like YouTube, Apple, and BlackBerry maker Research in Motion.

The caucus, which recently launched a Web site, is scouting social media services and other new technologies that might be of use to the rest of House Republican Conference in keeping in touch with the public.

Constituents "want to be kept up to date from us right now," Latta said, "They don't want to have to wait half a day, or a day, or two days later to actually get the communication," from a congressional office. So, the group is trying to identify "best practices" on social media services like Facebook, Twitter, YouTube, Qik, and UStream.

The four men are also using the technologies themselves, an effort to set an example for colleagues who may be reticent to try out social media.
END_OF_DOCUMENT_TOKEN_TO_BE_REPLACED

"The people involved deserve our gratitude," Cheney said in the statement. "They do not deserve to be the targets of political investigations or prosecutions."

"This intelligence saved lives and prevented terrorist attacks," Cheney said. "These detainees also, according to the documents, played a role in nearly every capture of al Qaeda members and associates since 2002."

"The activities of the CIA in carrying out the policies of the Bush Administration were directly responsible for defeating all efforts by al Qaeda to launch further mass casualty attacks against the United States," he added.

While analysis in the documents says information from detainee interrogations "helped thwart a number of al-Qaida plots" and "arrests...disrupted attack plans in progress," it remains unclear from the heavily redacted documents whether that information was obtained through the enhanced interrogation techniques Cheney defends.

[cnn-photo-caption image=http://i2.cdn.turner.com/cnn/2009/POLITICS/08/25/obama.vacancies/art.obamawisconsin.gi.jpg caption="Several of President Obama's Cabinet secretary picks dropped out because of the nomination process"]
WASHINGTON (CNN) - More than seven months into office, President Obama still has a number of top posts to fill, which one expert said could be hurting the nation's security.

An analysis by the White House Transition Project - a nonprofit organization tracking administrations - showed that 210 days into his administration, Obama had nominated candidates for 243 of the 385 jobs requiring Senate confirmation.

The Senate has confirmed 193 but still has a backlog of candidates needing to be examined.

Some of the top jobs open include assistant secretary of state for nonproliferation, and the directors of the Agency for International Development, Customs and Border Protection, Drug Enforcement Administration, and the Bureau of Alcohol, Tobacco, Firearms and Explosives.

David Lewis, a professor at Vanderbilt University, said the vacancies in key posts might be hurting the nation's security.

On day two, Obama takes a break to make news

[cnn-photo-caption image= http://i2.cdn.turner.com/cnn/2009/images/08/25/art.obama.0824.gi.jpg caption="The president opened his remarks with an apology to reporters for 'interrupting the relaxing I told you all to do'."]

(CNN) - Despite word from the White House that "nobody is looking to make any news" this week, President Obama on Tuesday took a break from vacationing to announce his plans to nominate Ben Bernanke to a second term as head of the Federal Reserve.

"The man next to me, Ben Bernanke, has led the Fed through one of the worst financial crises that this nation and the world has ever faced," Obama said from Martha's Vineyard, a Massachusetts Island.

Obama made the announcement at Oak Bluffs Elementary School. A few dozen onlookers gathered outside the school to wave to the presidential motorcade as it arrived.

The president opened his remarks with an apology to reporters for "interrupting the relaxing I told you all to do."

CNN Truth Squad: Will Medicare be cut a half-trillion dollars?

Click to watch video
The Statement: The Obama administration's revamp of the U.S. health-care system will require $500 billion in cuts in Medicare, the federal health program that now covers Americans over 65. The claim is now a cornerstone of Republican efforts to resist the administration's plans, with GOP chief Michael Steele vowing in a Washington Post opinion piece to defend Medicare from cuts.

(Get the facts and verdict after the jump.)