[cnn-photo-caption image= http://i2.cdn.turner.com/cnn/2009/images/08/30/art.nola0830.cnn.jpg caption="Democratic strategist James Carville and his wife, Mary Matalin, a Republican strategist, moved their family to New Orleans in mid-2008."]
WASHINGTON (CNN) – A prominent Democrat who is also a Louisiana native said Sunday he was somewhat offended that President Obama has yet to pay a visit to New Orleans, a city trying to rebuild after the devastation of Hurricane Katrina four years ago.

“I’m a Democrat and this is a Democratic president. I would describe myself as slightly miffed that he hasn’t been down yet,” Democratic strategist and longtime Clinton ally James Carville said Sunday on CNN’s State of the Union, “but he says he’s coming down before the end of the year. And we’re hospitable people and we certainly will welcome him.”

Carville and his wife Mary Matalin, a Republican strategist and former Dick Cheney aide, moved their family to New Orleans in mid-2008.

“I can honestly say, . . . you can start to feel the progress now,” Carville said of the legendary city’s efforts to rebuild. “It’s a work in progress but there has been progress. I promise you that,” Carville also told CNN Chief National Correspondent John King.

Carville’s words were echoed by one of the Louisiana’s senators, Democrat Mary Landrieu.
END_OF_DOCUMENT_TOKEN_TO_BE_REPLACED

The caravan of tour buses, RVs, cargo trucks and SUVs kicked off a cross-country tour Friday in Sacramento, California, and plans on holding events in 33 cities en route to Washington, D.C. for what organizers hope will be a big rally on September 12.

The tour is being funded by Our Country Deserves Better, a conservative political action committee.

The tea party movement gained momentum this year; several parties were held across the country this summer to protest President Barack Obama and the Democrats' economic stimulus plans, among other things.

On July 4, nearly 2,000 advocates, toting signs and chanting slogans, rallied outside Congress. Activists said the TEA Party Day - an acronym for "Taxed Enough Already" - was in response to runaway government spending. But now, the focus is on health care reform, an issue that has brought about demand for bigger, more encompassing debate throughout the country and in Congress.

At an event Saturday in Winnemucca, Nevada, Carolyn Rowe came to the tea party in a T-shirt depicting Obama as the joker from "Batman." In place of the familiar "Hope" logo of Obama's campaign was the word "Joke."

She says she is concerned about the number of so-called "czars" in the Obama administration and she fears losing her choice of doctor if health care reform passes.

"I believe he's trouncing the Constitution and taking control of our country in a direction we don't want," says Rowe, from beneath a wide brimmed straw hat. "I think he has a hidden agenda, and I think he doesn't tell the truth and that in itself bothers me."

Husband-and-wife team Barbara and Pete Jones drove up from Reno, Nevada. Barbara's red T-shirt said "Impeach Everyone," but she said Obama is first on her list.
END_OF_DOCUMENT_TOKEN_TO_BE_REPLACED

Kennedy's gravesite opens to the public 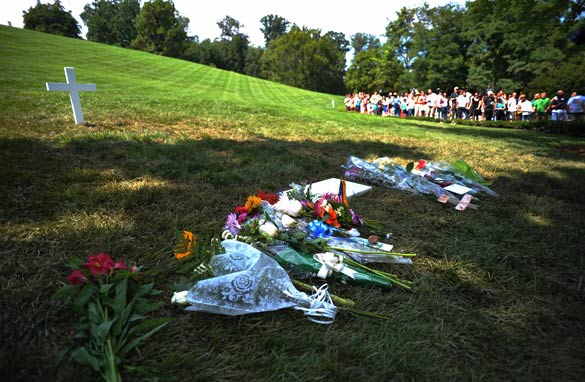 Visitors lined up Sunday at Arlington National Cemetery to pay their respects to the late Sen. Ted Kennedy, a day after the Massachusetts senator was buried not far from his two slain brothers. (Photo Credit: Getty Images)

WASHINGTON (CNN) - The Arlington National Cemetery gravesite of Sen. Edward M. Kennedy opened to the public at 8 a.m. Sunday, a little less than 12 hours after he was buried.

His brothers, President John F. Kennedy and Sen. Robert F. Kennedy, are buried a few hundred feet away in the sprawling cemetery in Virginia. The gravesite is identical to that of his brother Robert. It features a two-and-a-half-foot white cross and a marble marker, which reads "Edward Moore Kennedy 1932-2009."

A temporary ropeline was set up for people to approach the gravesite and pay their respects, but there are plans to build a walkway in the future. Several flowers and cards were left by visitors in the hours following the opening of the site.

A cemetery official said the site would be closing Sunday afternoon for an expected visit from Victoria Ann Reggie Kennedy, the senator's widow.

Dem on CIA probe: 'No one is above the law'

Click to watch video
WASHINGTON (CNN) – A week before Congress returns from its August recess, there are already signs that a recently announced Justice Department investigation into the CIA’s harsh interrogation techniques of terrorism suspects will be a source of tension between Democrats and Republicans on Capitol Hill.

“This investigation is very appropriate,” Democratic Sen. Maria Cantwell of Washington said Sunday on CNN’s State of the Union, “No one is above the law. This is not a political process. This is a legal process. It’s a legal process to find out whether the law was broken.”

Cantwell was answering Republican criticism – most notably from former Vice President Dick Cheney - that the recent decision by Attorney General Eric Holder to open an investigation into CIA interrogations was politically motivated and runs the risk of making the spy agency timid in tracking down terrorists who intend to do the country harm.

“They’re making it so the people at the CIA are afraid to do anything,” said Republican Sen. Orrin Hatch, who sits on the Senate Intelligence Committee. “Frankly, it’s gone way too far,” Hatch told CNN Chief National Correspondent John King.
END_OF_DOCUMENT_TOKEN_TO_BE_REPLACED

Reliable Sources: Journos reflect on Kennedy and the press

"He was justifiably lionized," Joe Klein, columnist for TIME Magazine, said. "And he just died for God sakes. I think, you know, the bad stuff was mentioned, it wasn't dwelt upon, although there were some conservative commentators who did."

END_OF_DOCUMENT_TOKEN_TO_BE_REPLACED

State of the Union: Carville, Matalin spar over CIA probe

Cheney made clear he believes President Obama directed Holder to launch the review because the president is feeling pressure from left-wing Democrats. Cheney said the review will undermine the willingness of CIA personnel to conduct necessary operations.

"I think it's a terrible decision," Cheney said on "Fox News Sunday." "It's clearly a political move. There's no other rationale for why they're doing this."

He criticized Obama for allowing a review considering the president previously said that CIA operatives involved in the interrogations would not be prosecuted. "I think he's trying to duck responsibility for what's going on here, and I think it's wrong," Cheney said.

'I would tend not to' support the public option, says Landrieu

Click to watch video
WASHINGTON (CNN) – A moderate Senate Democrat who is a possible swing vote in Republicans’ favor on health care reform said Sunday she is not likely to support a robust public health insurance option and believes that reform proposals should focus on lowering health care costs.

“I would tend not to,” Sen. Mary Landrieu of Louisiana said Sunday on CNN’s State of the Union when asked whether she would support a public health insurance option included in health care reform bills passed by committees in the House of Representatives. “But, we’ve got to keep working to find solutions,” Landrieu added.

“There are some portions of our health care system that are working, but it’s all too expensive.”

The Democrat told CNN Chief National Correspondent John King she thinks costs could be contained without the inclusion of a public health insurance option. She said she supports an alternative proposal co-sponsored by Sens. Ron Wyden, D-Ore., and Bob Bennett, R-Utah, that focuses on “providing insurance through the free marketplace with the right regulations and safeguards.”

Landrieu also told King “it would be very difficult” for her to support a health care reform bill that allowed taxpayer-funded abortions even though “general insurance policies now – subsidized through the government by the tax code – allow women to make those choices right now, again, within the confines of the Constitution.”

(CNN) - Former Vice President Dick Cheney says he was "probably" the strongest advocate in the Bush administration of a military strike against Iran's nuclear program.

Cheney told FOX News Sunday in an interview conducted Friday that he believed the military threat was crucial to negotiations with Iran on ending its efforts to develop a nuclear weapon.

Asked if he opposed former President George W. Bush's decision to enter negotiations with Iran and European nations on the issue, Cheney said he would discuss the matter further in an upcoming book on his life.

However, he said a recent Washington Post story that reported he will criticize Bush in his book was wrong.

"We had policy differences, no question about that," Cheney said. "But to say that I was disappointed with the president isn't the way it ought to be phrased."

When asked again if he believed that Bush went "soft" in his second term, as reported in the Washington Post story, Cheney replied: "No, I'm not going to speculate on it. I'm going to write a book that lays out my view of what we did."

Kennedy 'expected more of us' on health care, Dodd says

WASHINGTON (CNN) – A close personal friend of the late Sen. Ted Kennedy said Sunday that the Massachusetts lawmaker’s death ought to act as an inspiration for Democrats and the entire Senate to set aside partisan differences and pass health care legislation.

“We ought to sit down together and work it out and go through this” Connecticut Democrat Sen. Christopher Dodd said on CNN’s State of the Union a day after Kennedy’s funeral. “That’s what we do in the Senate. That’s how things move forward. . . . The country cannot afford this any longer. We need to have a health care plan in this country that’s accessible, affordable, and quality. And how we get there is the challenge before us. And we must meet that challenge. ”

Pointing out that Kennedy introduced his first piece of health care reform legislation roughly 40 years ago, Dodd also said that his friend would be “terribly disappointed” if partisan politics dominated the debate over fixing the nation’s health care system.

“He expected more of us and I think we can meet that expectation and I’m confident we can,” Dodd told CNN Chief National Correspondent John King.

Related video: 'What would Teddy do?'

Republican Sen. Orrin Hatch of Utah, also a close friend of Kennedy’s, suggested that the partisan gulf between the two parties on health care may be too wide to bridge.

Getting a bill passed is “going to take a lot of work,” Hatch said Sunday. The Republican also said it was “crazy” to try to squeeze money out of the Medicare program in order to help fund broader health care reform including a hotly contested public health insurance option.