Congress is expected to vote this afternoon on a resolution expressing disapproval of Rep. Joe Wilson of South Carolina for his outburst during President Obama's speech last week. Full text of the resolution:

Whereas on September 9, 2009, during the joint session of Congress convened pursuant to House Concurrent Resolution 179, the President of the United States, speaking at the invitation of the House and Senate, had his remarks interrupted by the Representative from South Carolina, Mr. Wilson; and Whereas the conduct of the Representative from South Carolina was a breach of decorum and degraded the proceedings of the joint session, to the discredit of the House: Now, therefore, be it

Resolved, That the House of Representatives disapproves of the behavior of the Representative from South Carolina, Mr. Wilson, during the joint session of Congress held on September 9, 2009.

Congressman says some people aren't worth peeing on

[cnn-photo-caption image= http://i2.cdn.turner.com/cnn/2009/images/09/15/art.stark.cnn.jpg caption="Pete Stark is involved in his own classic YouTube moment."](CNN) - Rep. Barney Frank, D-Massachusetts, raised eyebrows last month when he told a constituent at a raucous health care town hall event, "Trying to have a conversation with you would be like arguing with a dining room table."

Now Rep. Pete Stark, D-California, is involved in a similar instant YouTube classic, telling a town-hall participant over the weekend that he wouldn't "waste the urine" to pee on the man's leg.

First reported by the San Francisco Chronicle and confirmed by a YouTube clip of the event, the longtime congressman made the remark after the participant launched into a long, but calm, litany about government inefficiency when it comes to nation's health care system. The man concluded his remarks with warning Stark not to "pee on my leg and tell me it's raining."

As the audience cheered, a calm Stark responded: "Well, I wouldn't dignify you by peeing on your leg. It wouldn't be worth wasting the urine."

There was a mixture of laughter and boos as Stark motioned for the next question.

Movement 'coming from the soil of America,' conservative says

[cnn-photo-caption image= http://i2.cdn.turner.com/cnn/2009/images/09/15/art.perkins0915.cnn.jpg caption="Tony Perkins said Tuesday that recent conservative outrage directed at the Obama administration isn't necessarily going to be a 'windfall' for the GOP."]
WASHINGTON (CNN) - Three days after conservatives converged on the nation's capital to express their concerns about a number of the Obama administration's policies, a leading social conservative has a warning for the Republican Party.

"The public is not saying they're for Republicans," Family Research Council president Tony Perkins said Tuesday at a gathering of conservative bloggers and online activists, "they're saying they're against big government and this is not necessarily going to be a windfall for Republicans."

As bipartisan negotiations over a health care bill in the Senate Finance Committee appear to be reaching a conclusion, Perkins said it would be a "disaster" for congressional Republicans to give their support to "anything that has any element of the public [health insurance] option."

And Perkins rejected the notion that the growing outpouring of concerns expressed by conservatives – during the recent August congressional recess and during last Saturday's event in Washington – had been contrived by groups like his.
"I don't think it's something that can be directed or controlled. This is not the work of organizations. I think organizations can fan it and channel it but they can't build it and direct it. I think this is coming genuinely - this is not astroturf. This is coming from the soil of America."
END_OF_DOCUMENT_TOKEN_TO_BE_REPLACED

Scenes from the Capitol: Maggie the cow goes to Washington 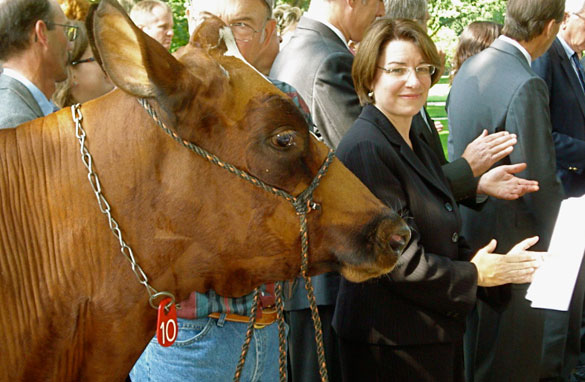 WASHINGTON (CNN) - Minnesota Sen. Amy Klobuchar is joined by a cow named Maggie during a press conference on Capitol Hill on Tuesday.

Posing with the cow, Klobuchar and five other Democratic Senators called for more federal support for dairy farmers.

Click to watch video
PITTSBURGH, Pennsylvania (CNN) - President Barack Obama delivered a fiery defense of his embattled health-care reform plan Tuesday, telling a raucous union audience that "now is the time for action" and "the time to deliver."

"When are we going to say enough is enough?" he asked a national AFL-CIO convention. "How many more workers have to lose their coverage? How many more families have to go into the red for a sick loved one? ... We have talked this issue to death year after year, decade after decade."

Seeking to rally his Democratic base, the president pointed out that "few have championed" the cause of health-care reform "longer than you, our brothers and sisters in organized labor. You're making phone calls, knocking on doors, and showing up at rallies - because you know why this is so important."

The Rust Belt crowd roared its approval as the president concluded his remarks by rehashing a version of his slogan from last year's presidential campaign, asking if the convention attendees were "fired up" and "willing to go."

END_OF_DOCUMENT_TOKEN_TO_BE_REPLACED

First on the Ticker: RNC to spend $7 million in Virginia race

That figure includes a sum of $400,000 that was transferred directly to the campaign of Republican candidate Bob McDonnell on Tuesday, and the nearly $2 million the RNC has already pumped into the race so far this year. The money will be shared between McDonnell's campaign and the Virginia Victory committee, a partnership between the RNC and the Republican Party of Virginia.

Subtracting the money already spent on the campaign, the RNC's financial commitment leaves McDonnell and other Virginia Republicans with roughly $5 million to spend with just under 50 days left in the governor's race, which is one of two marquee political battles in 2009 along with the New Jersey's governor's race

"Bob McDonnell is a proven leader in the state of Virginia and the RNC is fully committed to ensuring that the campaign has the resources necessary to elect Bob McDonnell the next Governor of Virginia," said Katie Wright, a spokeswoman for the RNC.

The RNC's cash infusion exceeds that of the Democratic National Committee, which announced earlier this month it plans to spend at least $5 million to support Democratic candidate Creigh Deeds.

"Since devastating revelations about Bob McDonnell's feelings regarding women in the workforce, marriage and equal pay, he's going to need every dollar he can get to run from his record," Sevugan said.

UPDATE: The Deeds campaign announced Tuesday that it had raised $3.5 million in July and August. The McDonnell campaign is expected to release its most recent fundraising figures later today.

UPDATE 2: McDonnell raised less than Deeds in July and August - $2.9 million - but his campaign is touting a $1.5 million cash-on-hand advantage over the Democrat. McDonnell had $5.8 million in the bank entering September.

WASHINGTON (CNN) - At least one Democrat is rejecting efforts by House leadership to punish Rep. Joe Wilson for his controversial outburst on the House floor last week.

New Hampshire Rep. Paul Hodes, who is also running for Senate in 2010, said Tuesday that he will not support the "resolution of disapproval" against Wilson, which is scheduled to be voted on later today.

While Hodes called Wilson's actions "reckless and disrespectful," he said in a statement that "the focus on his outburst has served as a distraction to the larger goal of providing affordable, portable, high quality health care to every family."

"In my judgment, it's time to move on and I do not support this resolution," Hodes said. "We should not allow Mr. Wilson's reckless conduct to overshadow the need to work together to craft a strong health care reform measure that gives Americans lower costs, more choice, and real control in a fiscally responsible fashion."

Clinton's decision to weigh in for Newsom puts him at odds once again with the candidate many consider the likely frontrunner for the Democratic nomination - California Attorney General and former governor Jerry Brown, the man Clinton defeated for the 1992 Democratic presidential nomination.

But Newsom curried favor with the former president in 2008, when he endorsed and campaigned actively for Hillary Clinton during her quest for the Democratic presidential nomination. The 42nd president is now returning the favor by throwing his weight around in a Democratic primary, as he has done with other 2010 candidates who backed Hillary's bid last year.

Clinton has endorsed Florida Rep. Kendrick Meek and Ohio Lt. Gov. Lee Fisher in their 2010 Senate bids, even though both candidates have yet to secure their party's nomination. He also backed his longtime ally Terry McAuliffe in the Virginia governor's race, but McAuliffe lost a three-way fight for the Democratic nomination in June.

The endorsement was first reported by ABC News.

In a statement, the four-term congressman said he is unable to build the necessary campaign infrastructure ahead of the December 8th Democratic primary.

"The challenge of putting together the resources and organization necessary to wage a competitive statewide campaign in less than 90 days is insurmountable," he said in the statement. "I have been given a huge honor and responsibility by the families of the 9th Congressional District of Massachusetts. I will continue to try to live up to their highest expectations.”

Lynch’s decision comes a week after he signaled that he would run for the seat - pulling the necessary paperwork to launch a campaign.

He is only the latest in a string of Massachusetts Democrats who have recently announced that they will not run for the seat held by Kennedy for more than four decades.