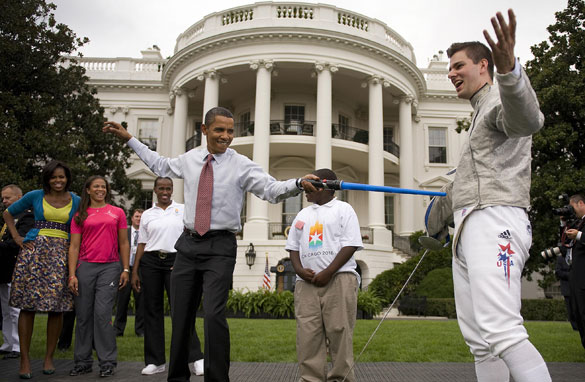 Chicago, Illinois, is competing with Madrid, Spain; Rio de Janeiro, Brazil; and Tokyo, Japan, for the opportunity to hold the Summer Olympics.

Wednesday afternoon, the Obamas will play host to an event at the White House aiming to boost Chicago's bid.

Chicago Mayor Richard Daley and U.S. Olympians and Paralympians are among those who will participate in the event, the White House said in a statement.

END_OF_DOCUMENT_TOKEN_TO_BE_REPLACED

On Tuesday, several GOP senators sent a letter to the president questioning the constitutionality of such appointments. "When established within the White House, these 'czars' can hinder the ability of Congress to oversee the complex substantive issues that you have unilaterally entrusted to their leadership," they wrote, identifying 18 czars that may be undermining congressional responsibilities.

Critics have already claimed one victim: so-called "Green Jobs Czar" Van Jones, who was forced to resign this month after conservatives unearthed video of of him making unseemly comments about Republicans and signing onto a petition sponsored by a 9/11 conspiracy group.

Now the White House and its allies are accusing administration critics of taking marching orders from talk show host Glenn Beck, and pointing out that George W. Bush's administration appointed dozens of "czars" during his eight years in office.
END_OF_DOCUMENT_TOKEN_TO_BE_REPLACED

Steele accused Carter of being "dead wrong" and said he thinks the former Democratic president "was out of line."

"I think that he takes this to a point - to a level that is not reflective of what's been transpiring" in the current health care debate, Steele said. "When you go down this road and you start to just willy-nilly - as I believe President Carter has - throwing race out there, you diminish real instances of racism that needs to be addressed."

Carter on Tuesday said that he believes an inclination toward racism still exists in parts of the country and that it has "bubbled up to surface because of the belief by many white people not just in the south but around the country that African Americans are not qualified to lead this great country."

Carter made similar comments Wednesday night at a Town Hall in Atlanta, where he said that carrying signs equating Obama with Adolf Hitler and or urging that the president be buried with the late Sen. Ted Kennedy “are beyond the bounds” of how presidents have been treated in the past.

“And I think people who are guilty of that kind of personal attack against Obama have been influenced to a major degree by a belief that he should not be president because he happens to be African American,” Carter said. “ ... And my hope is, and my expectation is, that in the future both Democratic leaders and Republican leaders will take the initiative in condemning that kind of uprecendented attack on the president of the United States.”

END_OF_DOCUMENT_TOKEN_TO_BE_REPLACED

Related: Bush on Obama: 'This guy has no clue'

The meeting late Wednesday afternoon with Democratic Sen. Ron Wyden and GOP Sen. Bob Bennett was not on the President's public schedule, but senior administration officials confirmed it took place and characterized it as being part of Obama's ongoing effort to reach out to lawmakers in both parties. Wyden and Bennett have long pushed a bipartisan reform bill that would create state-run insurance exchanges through which consumers could select various plans, including their existing employer-sponsored plan.

Republicans officials privately contend the meeting, which came on the same day Baucus rolled out his plan, suggests the president is looking for alternative legislative vehicles that could attract GOP support as the clock continues to tick on the reform effort.

But senior administration officials sharply disputed that characterization, saying Wyden has been trying to get an audience for the legislation for some time, and the president has always intended to meet with the lawmakers. The officials said the timing of the meeting was coincidental to the Baucus unveiling, and that the president simply wants to continue reaching out to lawmakers in both parties who are serious about reform.
END_OF_DOCUMENT_TOKEN_TO_BE_REPLACED

[cnn-photo-caption image= http://i2.cdn.turner.com/cnn/2009/images/09/16/art.tarkanian0916.gi.jpg caption="Danny Tarkanian, pictured in this 1998 file photo with his father in the background, is currently the frontrunner in a crowded GOP field in Nevada's 2010 Senate race."]
WASHINGTON (CNN) - Danny Tarkanian sailed into Washington this week on a wave of polling data that indicates he - and other Republican Senate prospects - could defeat Senate Majority Leader Harry Reid next year.

Reid is a top target for national Republicans in 2010 - but the GOP faces a big problem: it has not settled on a candidate to challenge the Democratic leader. The GOP's best prospect, Rep. Dean Heller, took a pass on the race.

Now, Tarkanian is one of several Republicans who have either declared their candidacies or are eyeing a challenge to Reid in 2010. As the son of legendary UNLV basketball coach Jerry Tarkanian, the younger Tarkanian has immediate name recognition in the state - and is the frontrunner, at least for now, in a crowded GOP primary field.

The real estate entrepreneur described himself as a "fiscal and social conservative" during a visit to CNN Wednesday, painting Reid as out of touch with Nevada voters. He echoed national Republicans on ideas to reduce the cost of health care, such as tort reform and insurance portability; said the way to revive the economy is to invest in the private sector; and said that the United States needs to stay in Afghanistan to finish the job.

While Tarkanian did not embrace disgraced Sen. John Ensign and embattled Gov. Jim Gibbons, he stated that it would not be right to "turn your back" or "shun" the two highest-ranking Republicans in the state. But, he said, both are "separate from my race."
END_OF_DOCUMENT_TOKEN_TO_BE_REPLACED

Canada vs. US: whose health care system is better?

WASHINGTON (CNN) - Republican Sen. John Barrasso, an orthopedic surgeon from Wyoming, told CNN Wednesday that there are some things that the United States should take from Canada's health care system but warned about long lines and high costs with a government-run plan.

The good things? Barrasso said in an interview on CNN that doctors are better protected from malpractice lawsuits in Canada, so they don't have to order expensive tests simply to protect themselves. But the Republican lawmaker said there's a doctor shortage in Canada because they are paid less and that thousands of patients flock south for immediate care.

"I'm an orthopedic surgeon who has operated on people who come from Canada," Barrasso said. "People don't want to wait. That's why people with cancer from other countries come to the United States because the wait time is less, the screening is better."

But Canadian Liberal Sen. Grant Mitchell, who lives with and likes his government-funded health care, saying that it's "half as expensive" and that he has never had to change doctors, disputed the charge that his countrymen have to go to the United States for better care. He said Canada's system is "one of the top in the world" and that Canadians "have a longer life span."

"The fact is that Canada provides outstanding health care," Mitchell said on CNN. "There's 49 million Americans who aren't covered by a health care program. When you start to talk about people not getting services, what are you saying in the U.S. about those 49 million people? How can we simply disregard those people?"

[cnn-photo-caption image= http://i2.cdn.turner.com/cnn/2009/US/09/16/us.acorn/art.acorn.investigation.youtube.jpg caption="In the videos, the individuals seek advice on setting up a brothel with underage women from El Salvador."]

WASHINGTON (CNN) - The community organizing group ACORN Wednesday announced a hiring freeze, new training programs and an independent review of its programs following the recent release of a series of videotapes embarrassing to the agency.

The videos - secretly taped by two individuals posing as a pimp and prostitute –showed ACORN employees in four of the agency's offices suggesting or condoning a series of illicit actions as the couple sought advice on setting up a brothel with underage women from El Salvador.

"We have all been deeply disturbed by what we've seen in some of these videos," said ACORN CEO Bertha Lewis. "I must say on behalf of ACORN's Board and our Advisory Council that we will go to whatever lengths necessary to reestablish the public trust."

The steps announced include an immediate halt in hiring for all ACORN offices, an immediate training program for all frontline staff, and selection of an independent auditor by the end of this week.

The change means some federal employees will begin using services like YouTube, Gmail and WordPress, which store data on private Internet servers instead of on those paid for with public money.

The process will start small but will ramp up quickly, Vivek Kundra, the U.S. chief information officer, said in a blog post on Tuesday.

"Our policies lag behind new trends, causing unnecessary restrictions on the use of new technology," Kundra writes in the post on WhiteHouse.gov.

"We are dedicated to addressing these barriers and to improving the way government leverages new technology."

The app store is designed for federal employees doing official government business and is not intended for use by the public.