NEW YORK (CNNMoney.com) - More than a million people could receive an additional 13 weeks of unemployment benefits under a bill approved by the House on Tuesday.

The bill extends benefits for those living in states with jobless rates higher than 8.5%. Some 27 states, plus the District of Columbia and Puerto Rico, fall into this category. The national unemployment rate hit 9.7% in August, the highest in 26 years.

The legislation now moves to the Senate. While there is support for the measure on both sides of the aisle, senators may make significant changes to it. Finance Committee Chairman Max Baucus, D-Mont., is seeking to expand the bill to give additional weeks of benefits to people in all states, not just high unemployment ones, an aide said.

[cnn-photo-caption image= http://i2.cdn.turner.com/cnn/2009/POLITICS/09/23/palin.hongkong/art.palinspeech.jpg caption="Sarah Palin's speech at CLSA Investors' Forum appeared to be largely well received."]HONG KONG, China (CNN) –– Sarah Palin touched on a host of topics - including Reaganomics, China and human rights, Tibet, the Asian and U.S. economies, family and moose in Alaska - as she delivered a speech to investors Wednesday in Hong Kong, according to audience members.

The former Republican vice presidential candidate was the keynote speaker at the 16th CLSA Investors' Forum, in what was billed as her first speech outside North America. She recently stepped down as Alaska's governor.

Her 90-minute address, which was closed to the media, was heard by 1,100 people, according to CLSA head of communications Simone Wheeler.

Those who attended her speech said she did well, though some could be seen leaving early on. A few of those people said they were heading to other forum offerings. Most people declined to speak with the media about the speech.

Deeds says he will raise taxes if necessary

[cnn-photo-caption image= http://i2.cdn.turner.com/cnn/2009/images/09/23/deeds.phamby.0610.cnn.jpg caption="Creigh Deeds re-iterated on Wednesday that he will raise taxes to fix the state's transportation problems if necessary."]

WASHINGTON (CNN) - Calling his plan "honest, straightforward - and the only one that can succeed," Virginia's Democratic gubernatorial candidate Creigh Deeds re-iterated on Wednesday that he will raise taxes to fix the state's transportation problems if necessary.

One week after a debate appearance in which he made confusing statements about whether he would support a tax hike to fund the state's transportation budget - remarks that were pounced upon by his Republican opponent Bob McDonnell - Deeds took to the opinion page of the Washington Post to make his position clear.

"As a legislator, I have voted for a number of mechanisms to fund transportation, including a gas tax," Deeds wrote. "And I'll sign a bipartisan bill with a dedicated funding mechanism for transportation - even if it includes new taxes."

The issue of transportation - particularly the problem of finding ways to fix the jammed roadways of northern Virginia - has bogged down the Virginia General Assembly for years. The topic has become a flashpoint in this year's gubernatorial race, with McDonnell accusing Deeds of not having a concrete plan to pay for his plans to create high-speed rail and reduce traffic congestion.

END_OF_DOCUMENT_TOKEN_TO_BE_REPLACED

He also expressed empathy for Hatoyama's having to attend a global summit so soon after taking office.

They met as world leaders gathered in New York for the opening of the United Nations General Assembly.

Hatoyama's Democratic Party of Japan won a landslide election in August to take power from the Liberal Democratic Party, which had run the country for nearly half a century.

END_OF_DOCUMENT_TOKEN_TO_BE_REPLACED

UNITED NATIONS (CNN) - President Barack Obama made a strong call Wednesday for renewed efforts to reach a Middle East agreement that creates a secure Israel and an independent Palestinian state.

"The time has come to re-launch negotiations - without preconditions - that address the permanent-status issues: security for Israelis and
Palestinians; borders, refugees and Jerusalem," Obama said in his first speech as president to the U.N. General Assembly.

"The goal is clear: two states living side by side in peace and security - a Jewish State of Israel, with true security for all Israelis; and a viable, independent Palestinian state with contiguous territory that ends the occupation that began in 1967, and realizes the potential of the Palestinian people."

His statement prompted applause, and Obama received an ovation when he later stated: "The United States does Israel no favors when we fail to couple
an unwavering commitment to its security with an insistence that Israel respect the legitimate claims and rights of the Palestinians.

"And nations within this body do the Palestinians no favors when they choose vitriolic attacks against Israel over a constructive willingness to recognize Israel's legitimacy, and its right to exist in peace and security."

Asked if Patrick is on board, one of these sources said "it is 75 percent there."

On Tuesday, the Massachusetts Senate passed a bill that would allow Patrick to appoint a temporary replacement for Kennedy until an election can be held to fill the seat in January. That measure is now up for final consideration by both chambers of the legislature.

"If the governments of Iran and North Korea choose to ignore international standards; if they put the pursuit of nuclear weapons ahead of
regional stability and the security and opportunity of their own people; if they are oblivious to the dangers of escalating nuclear arms races in both East Asia and the Middle East - then they must be held accountable," Obama said in his first speech as president to the U.N. General Assembly.

"The world must stand together to demonstrate that international law is not an empty promise, and that treaties will be enforced," he continued. "We must insist that the future not belong to fear." 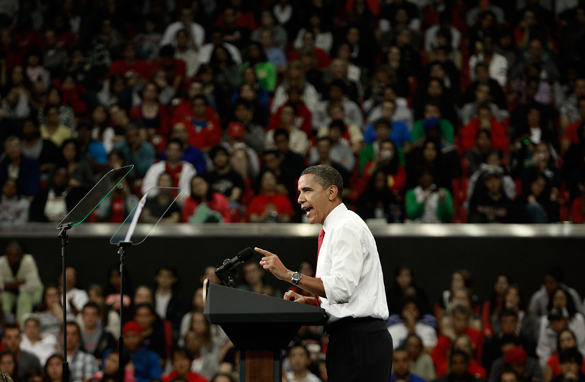 A new poll suggests most Americans don't feel the president is over exposed. (Getty Images)

WASHINGTON (CNN) - Is President Barack Obama overexposed? A new national poll indicates the answer is no.

Fifty-four percent of people questioned in an NBC News/Wall Street Journal survey say they're seeing the right amount of Obama, with 34 percent saying they see and hear too much of the president and 9 percent suggesting they don't hear enough from the president .

The poll, released Tuesday night, also indicates a partisan divide on the question, with 63 percent of respondents who voted for Republican John McCain in last year's presidential election saying they're seeing too much of the president, with only eight percent of people who voted for Obama feeling the same way.

According to the survey, 52 percent of independents believe Obama's exposure is OK and 40 percent say it's too much.

END_OF_DOCUMENT_TOKEN_TO_BE_REPLACED

Rep. Mike Ross, D-Arkansas, is a leader of the Blue Dog Coalition in the House of Representatives who pressed the congressional leadership to include more cost savings than originally proposed. Last month he came out against the idea of a government-run insurance plan that is included in the bills already passed by 3 House committees.

Ross' 2007 sale of his pharmacy in his hometown of Prescott, Arkansas to a company that operates several drug store chains, Stephen LaFrance Pharmacy Inc., is raising new questions. In the past LaFrance has been a critic of universal health care telling the Arkansas Democrat-Gazette it would lead to "...long lines, they won't be able to get treated, potential doctors will be afraid to go into medical school."

END_OF_DOCUMENT_TOKEN_TO_BE_REPLACED

WASHINGTON (CNN) – Rep. Hank Johnson is standing by his comments that Rep. Joe Wilson's "You lie!" outburst at President Obama "instigated more racist sentiment" and could lead to a resurgence of the Ku Klux Klan.

Johnson, a Georgia Democrat, wrote in the Atlanta Journal Constitution on Monday that he doesn't think that most of Obama's opponents are motivated by racism, but that he believes Wilson's comments "winked at a racist element" and that there is a small but "racially motivated fringe" among those who disapprove of the president and his policies.

"Wilson is a canny politician," Johnson said. "His outburst was a carefully calculated appeal to a particular constituency who question the legitimacy of Barack Obama's presidency. The symbolism of his act, which violated the rules of the House and attacked the dignity of the president's office, emboldened and validated those who believe that President Obama, despite having been lawfully elected, is an illegitimate occupant of the White House."

Johnson said that some feel "resentment that the president of the United States is a black man" and that the "risk of violence is real." He said he believes some of the angry protests during town hall meetings over the summer were also motivated by racism and warned that if that element of some opposition is ignored, it will "fester, grow and come back to haunt us in ways we haven't seen in decades."