Clinton speaks out on decision to support same-sex marriage

(CNN) - Former President Bill Clinton is speaking out about his decision to change his personal stance on same-sex marriage.

In an interview with CNN's Anderson Cooper, the former president said that while he still believes the issue should be left up to the states, he is no longer personally opposed to same-sex marriage as he once was.

"I was against the constitutional amendment to ban gay marriage nation-wide, and I still think that the American people should be able to play this out in debates," Clinton said. "But me, Bill Clinton personally, I changed my position.

"I am no longer opposed to that," he added. "I think if people want to make commitments that last a lifetime, they ought to be able to do it."

Click to watch video
WASHINGTON (CNN) - U.S. Secretary of Defense Robert Gates says there is still room for diplomacy with Iran, which has stood firm by its nuclear program despite international concerns.

"The reality is, there is no military option that does anything more than buy time," Gates told CNN's John King in an interview set to air at 9 a.m. Sunday. "The estimates are one to three years or so.

"And the only way you end up not having a nuclear-capable Iran is for the Iranian government to decide that their security is diminished by having those weapons, as opposed to strengthened. And so I think, as I say, while you don't take options off the table, I think there's still room left for diplomacy."

The existence of a second uranium enrichment facility in Iran came to light Friday, prompting President Barack Obama and the leaders of Britain and France to publicly chide the Islamic republic and threaten further sanctions.
END_OF_DOCUMENT_TOKEN_TO_BE_REPLACED

PITTSBURGH, Pennsylvania (CNN) - President Barack Obama said Friday that "Iran is on notice" regarding its nuclear efforts, and that the international community is united in its opposition to Tehran's nuclear program.

"Iran is on notice that, when we meet with them on October 1st, they are going to have to come clean and they are going to have to make a choice: are they willing to go down the path to greater prosperity and security for Iran - giving up the acquisition of nuclear weapons and deciding that they are willing to abide by international rules and standards in their in their pursuit of peaceful nuclear energy, or will they continue down a path that is going to lead to confrontation," he said in a news conference at the G-20 meeting here.

"What has changed is that the international community, I think, has
spoken. It is now up to Iran to respond."

[cnn-photo-caption image= http://i2.cdn.turner.com/cnn/2009/images/09/25/art.g20summit.gi.jpg caption="The Pittsburgh summit was the third G-20 summit in less than a year, and leaders agreed to work together more closely toward sustained growth and cracking down on banking regulations."]

WASHINGTON (CNNMoney.com) - Leaders of G-20 nations committed Friday to a timeline to establish and enforce new rules aimed at spurring financial firms around the globe to improve capital cushions and avoid taking risk.

They agreed to keep working to stimulate economies and stabilize financial systems following the worst financial crisis in decades.

"We brought the global economy back from the brink, we laid the groundwork today for longtime prosperity as well," President Obama said at a press conference after the summit concluded. "Still we know there is much further to go."

The Pittsburgh summit was the third G-20 summit in less than a year, and leaders agreed to work together more closely toward sustained growth and cracking down on banking regulations.

END_OF_DOCUMENT_TOKEN_TO_BE_REPLACED

WASHINGTON (CNN) - House Democratic leaders are discussing adding a tax on insurers as a way to reduce the overall price tag of their health care bill.

House Speaker Nancy Pelosi, D-California, told reporters Friday that an excise tax on high end insurance plans, similar to the one included in the Senate Finance Committee, was "under consideration."

But Pelosi added that leaders are also looking at other proposals to offset the costs of the bill.

"We have to see how much money we need, and if we're taking the bill down in costs there are other provisions in the Senate bill that bend the curve that might be more palatable," she said. "We'll see."

END_OF_DOCUMENT_TOKEN_TO_BE_REPLACED

WASHINGTON (CNN) - Hoping to advance the narrative that Democrat Creigh Deeds is the "negative" candidate in the Virginia governor's race, Republican Bob McDonnell unveiled two new television ads Friday pushing back against the onslaught of attacks about McDonnell's conservative voting record and his 1989 master's thesis that criticized working women.

The second ad is called "Working Woman" and puts McDonnell's daughter Jeanine - who served as an Army lieutenant in Iraq - in front of the camera to tell viewers that McDonnell encouraged his three daughters "to be independent and achieve our goals."

The ads suggest that the McDonnell campaign is playing a bit of defense, as their substantial lead in the polls evaporated after the Deeds campaign started running ads in northern Virginia calling attention to the controversial thesis. Deeds now trails McDonnell by just five points, according to the most recent Washington Post poll of the race.

END_OF_DOCUMENT_TOKEN_TO_BE_REPLACED

Obama's Broadway seats to be auctioned

The money will go to Broadway Cares / Equity Fights AIDS.  According to their Web site, Broadway Cares is "the nation's leading industry-based, not-for-profit AIDS fundraising and grant making organization."

The seats – K101 and K102 – belonged to the Belasco Theater, the second oldest house on Broadway that is currently being renovated.  The Obamas saw the show "Joe Turner's Come and Gone" in late May as part of a "date" the president took the first lady to in New York City.

The opening bid is $500.  The auction winner will also receive the show's poster, a signed Playbill and the framed front page of the New York Post with a full page photograph of the President and First Lady giving the cast a standing ovation.

Online pre-bids are being taken right now through tomorrow September 26 and the live auction will take place on Sunday at 5 P.M. ET.

Accountability Now, a political action committee, accuses Cooper of being out of step with voters of his Nashville-based district. The PAC specifically criticized Cooper for his reluctance to embrace President Obama's health care reform plan, and said that it is time to replace him with "a Democrat in Congress accountable to our district!"

A PAC representative has been in Cooper's district interviewing potential candidates for the past week, co-founder Jane Hamsher told CNN in an interview. Hamsher is a prominent liberal activist who founded the progressive blog Firedoglake. Unlike her blog, Hamsher said that Accountability Now does not emphasize liberal politics, but rather its mission is to defeat incumbent congressmen who the PAC believes has sold out to big business.

"Our goal is to get the corporatists out of there," Hamsher said.

Cooper is the PAC's first target. Hamsher said the organization is in talks with Libertarian-minded Republicans about possible primary challenges, but nothing has been set in stone.

END_OF_DOCUMENT_TOKEN_TO_BE_REPLACED

"My office was notified today of the attempted terrorist attack on both the Federal Building and my Congressional Office in Springfield," Schock said in a statement. "I am incredibly grateful to the FBI for their fine work in preventing this terrorist attack."

Finton had been supplied with a van filled explosives, which were harmless, by an FBI officer posing as an al Qaeda operative. Finton reportedly then drove to the Paul Findley Federal Office Building and Courthouse, which is close to Schock's office, and attempted to detonate the explosives with a cell phone. Finton was arrested immediately. 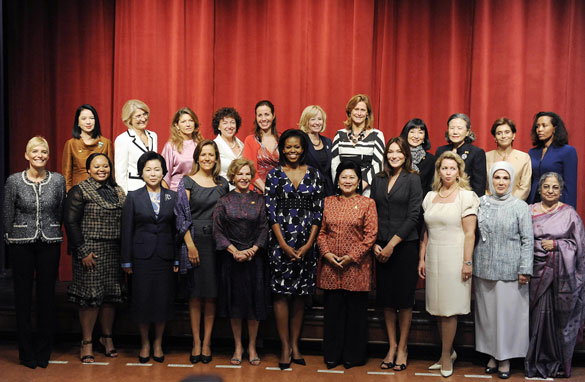 US First Lady Michelle Obama poses with other G20 leaders spouses at the Creative and Performing Arts school in Pittsburgh, Pennsylvania, on the sidelines of the G20 summit. (PHOTO CREDITS: Getty Images)