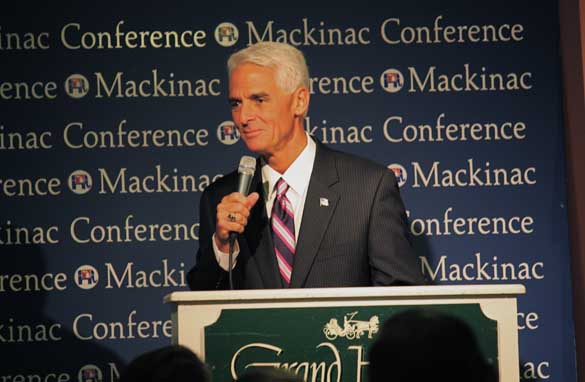 END_OF_DOCUMENT_TOKEN_TO_BE_REPLACED

MACKINAC ISLAND, Michigan (CNN) – Minnesota's Republican Gov. Tim Pawlenty - widely rumored to be considering a run for the presidency in 2012, and who's been making the rounds on the cable news shows and various states' political events in recent months - defended his nationwide appearances Saturday and said that he plans to continue.

"The point is, I have the time and the energy and the ability to make some time to speak out to issues that I think are important to my state and to the country," Pawlenty said at the biennial Mackinac Republican Leadership Conference on Mackinac Island, Michigan. He added that since this particular event fell on a Saturday he likely "wouldn't be doing the state's business today back in Minnesota" anyway.

The Democratic National Committee has set up a Web page devoted to "calling out" Pawlenty on what the DNC calls his healthcare reform "lies." The DNC even posted Pawlenty's main office phone number and encouraged visitors of the site to call and ask the governor to stop "lying" and "playing politics."

Pawlenty chalked it up to mere "politics," saying simply, "It's what they do."

In a brief interview with CNN, Pawlenty said that he would "eventually" be in Iowa - traditionally the first caucus state - for political events, but also stated that it would likely be in his role as vice chair of the Republican Governors' Association "as opposed to anything else."

Pawlenty also had a few words for President Barack Obama on the health care debate.

"President Obama said in his joint session of Congress he's going to call people out," Pawlenty said. "So we want to call him out back and say, 'Quit bankrupting the country. Stop spending money we don't have. Stop taxing us into oblivion.' "

He finished by saying to the president, "The next time you have a chance to talk to young people, maybe you should apologize for the bucketloads of debt that he's dumping on to their heads and shoulders."

Clintons share the stage - and a kiss - during initiative event

"I want to begin by expressing my extreme indebtedness to the Clinton Global Initiative, to all of you who participated, for giving me the first chance I have had in a week to see Hillary," Bill Clinton told the audience of social activists and business leaders at the closing session of CGI, a week-long conference designed to find solutions to global problems through public and private partnerships.

Secretary of State Hillary Clinton was at the session to unveil a new State Department initiative on food security.

As he introduced her, the former president was effusive in his praise for his wife, saying that her approach to food security - helping farmers around the world grow their own food to earn income and alleviate poverty - was much smarter than the decades-long policy of simply giving humanitarian aid and food to countries.

"It was a wrong-headed policy. It persisted through Democratic and Republican policies alike, including mine. We were all wrong and she is determined to reverse it," Bill Clinton said, adding that while he was busy engaging in politics, Hillary had "become her own NGO."

"Most of what I know about what I do today, I learned from her and she has become the best public servant our family has produced," he added. "I am very proud of her and honored that she came here."

END_OF_DOCUMENT_TOKEN_TO_BE_REPLACED

A casual Obama, along with the first lady, brought their dog Bo along for the family outing. The first couple did not stay for the whole game, but the crowd cheered goodbye when they left.

Can Obama succeed where Clinton failed?

They cited legal complications for the delay, but said they were still optimistic about shutting the facility soon.

The announcement represents a blow to the president, who signed an executive order with great fanfare in January, during his first week in office, setting the deadline to close the facility.

The delay may provide fodder for Republicans like former Vice President Dick Cheney, who has argued that shutting the prison would make the United States less safe. He said Obama should have had a detailed plan in place before signing the order.

In a written statement, U.S. Senate Republican Leader Mitch McConnell of Kentucky noted the announcement, and said, "even White House officials are now acknowledging that there is still no alternative that will keep Americans as safe as housing detainees at that secure facility off our shores.

"Americans and a bipartisan majority in Congress will continue to reject
any effort to close Guantanamo until there is a plan that keeps Americans as safe or safer than keeping detainees in the secure detention center."

The senior administration officials insisted the White House is making progress in finding third-party countries to accept the remaining detainees.

WASHINGTON (CNN)– In his weekly internet and radio address, President Barack Obama touted a "new era of engagement" around the world.

"Over the past nine months my administration has renewed American leadership, and pursued a new era of engagement in which we call upon all nations to live up to their responsibilities," Obama said. "This week, our engagement produced tangible results in several areas."

In the nearly 5 minute video, Obama recounted what he called the successes of the G-20 economic summit in Pittsburgh and the gathering of world leaders earlier in the week at the United Nations, while underscoring the severity of his message to Iran to give up its alleged pursuit of nuclear weapons and abide by international rules or risk confrontation.

"My offer of a serious, meaningful dialogue to resolve this issue remains open," said Obama. "Iran's leaders must now choose – they can live up to their responsibilities and achieve integration with the community of nations. Or they will face increased pressure and isolation, and deny opportunity to their own people."

WASHINGTON (CNN) - When President Obama announced Judge Sonia Sotomayor as his choice to be the next U.S. Supreme Court Justice, he noted that she played a key role in helping bring an end to the 1995 Major League Baseball strike.

"Some say that Judge Sotomayor saved baseball," said Obama, referring to Sotomayor's ruling against the owners that brought the strike to an end.

On Saturday, Sotomayor returns to the baseball diamond – this time taking the field. She will throw out the first pitch at Yankees Stadium.

"Having Justice Sotomayor, a South Bronx native, participate in our yearly Hispanic Heritage Month celebration is very exciting, as she is an inspiration to so many," said Manuel García, Yankees director of Latino Affairs.

WASHINGTON (CNN)– In the weekly Republican address, Georgia Sen. Johnny Isakson said the Democrats’ approach to health care is "the wrong approach for our families."

"The kind of massive tax increases proposed by the Democrats is exactly the wrong approach for our families, our small businesses and our economy, especially in a recession," Isakson said.

"Republicans believe the key to reforming health care is strengthening the doctor-patient relationship by using choice and competition – rather than rationing and restrictions – to contain costs and ensure access to affordable health care," he continued.

"It's a good thing the GOP continues to rotate messengers for their weekly address since the message certainly isn't changing. This week, GOP Senator Johnny Isakson continues to float the same debunked GOP lies and mistruths that Republican have repeated for weeks – apparently with new hope that their tired message will resonate with the American public."

"We did not expect Mr. Obama within less than 48 hours, to basically violate the commitment that he spoke of at the United Nations," said President Mahmoud Ahmadinejad.

The Iranian leader was referring to Obama's Wednesday speech to the U.N. General Assembly, where Obama called for international unity in attacking the world's challenges.

Asked if he was expressing disappointment in the U.S. president, Ahmadinejad responded, "We simply didn't expect him to say something that was ... was baseless."

Earlier Friday evening Obama said "Iran is on notice" regarding its nuclear efforts, and that the international community is united in its opposition to Tehran's nuclear program.