[cnn-photo-caption image= http://i2.cdn.turner.com/cnn/2009/images/09/29/art.franks0929.gi.jpg caption="In a recent speech to conservative activists, Arizona Republican Rep. Trent Franks said President Obama was 'an enemy of humanity.'"]
WASHINGTON (CNN) - A spokeswoman for a Republican congressman who called President Obama "an enemy of humanity" said Tuesday that he should have clarified that he was talking about the president's policies on abortion.

Bethany Haley, a spokeswoman for Arizona Rep. Trent Franks, told CNN on Tuesday the congressman was actually referring to "unborn humanity" - a specific reference to the president's policies on abortion.

"A president that has lost his way that badly, that has no ability to see the image of God in these little fellow human beings, if he can't do that right, then he has no place in any station of government and we need to realize that he is an enemy of humanity," Franks said.
END_OF_DOCUMENT_TOKEN_TO_BE_REPLACED

WASHINGTON (CNN)– In the latest installment of CNN=Politics Daily: President Obama is set to sit down Wednesday with his top generals for several high-profile meetings on Afghanistan. CNN White House Correspondent Dan Lothian takes a look at how Obama is approaching one of his most important foreign policy challenges.

Plus: A major setback Tuesday for supporters of the so-called "public option," as two Democratic amendments to include the measure were defeated during a Senate committee vote. But Sen. Jay Rockefeller, D-West Virginia, the sponsor of one of the amendments, insists the public option is not dead yet and vows to continue his push to keep the issue on the table.

Finally: Democratic strategist Paul Begala and Republican strategist Rich Galen weigh in on a Facebook poll about President Obama so controversial that the Secret Service is investigating it. The two strategists sound off on the heated rhetoric.

(CNN) - Florida Gov. Charlie Crist is standing by his recent prediction that President Obama may be headed for a massive electoral defeat similar to that which President Carter faced in 1980.

[It] may happen again," Crist told CNN's John Roberts on American Morning Tuesday. "What I think has occurred is that in 1976 the people wanted a change…I think the same thing sort of happened last year in America."

"What change we got may not necessarily be the change that America wants," Crist continued. "What I mean by that is that every day you get up and the government has taken over some other industry, auto industry or banks or whatever it might be. I think that the change that's coming about is a little too fast, little too furious."

Plagued by a sputtering economy, an energy crisis, and the Iran hostage ciris, Carter won just six states in 1980 - the fewest by a major-party presidential candidate since 1964.

Crist, who is vying for his state's GOP Senate nomination, recently vowed to a gathering of national conservatives that their party is poised for a rebound in the wake of two straight disappointing election cycles.

"America is awake and we're coming back," he said Friday at the biennial Mackinac Republican Leadership Conference on Mackinac Island, Michigan.

NEW YORK (CNN) - A former Democratic fund-raiser who contributed to the presidential campaigns of Hillary Clinton and Barack Obama was sentenced Tuesday to 292 months, or more than 24 years, in prison for fraud including campaign finance violations, U.S. Attorney Preet Bharara announced.

"Norman Hsu betrayed the trust of his victims by stealing their money with false promises of fake returns in order to finance a luxurious lifestyle...Today's sentence underscores our commitment to stop swindlers like Hsu in their tracks and bring them to the bar of justice," Bharara, U.S. attorney for the Southern District of New York, said in a statement.

The sentencing breakdown includes 240 months in prison for wire and mail fraud charges and 52 months in prison for charges of campaign finance fraud.
Judge Victor Marrero, who issued the sentence Tuesday afternoon at a Manhattan federal court, said in a statement, "Hsu's dishonest use of political campaigns to perpetuate his fraud strikes at the very core of our democracy."
END_OF_DOCUMENT_TOKEN_TO_BE_REPLACED

First on the Ticker: DNC to target seniors in new ad

"Republicans are trying to scare seniors about health reform," a narrator says at the opening of the ad as pictures of Republican National Committee Chairman Michael Steele, Senate Minority Leader Mitch McConnell and House Minority Leader John Boehner flash on the screen.

"The truth is health reform will help seniors by enhancing their drug coverage, reducing the premiums they pay for drugs and medical care, and helping keep Medicare solvent," adds the narrator.

The Democratic National Committee is financing the 30-second spot, which will air on national cable and in Washington, DC. A DNC official would not say how much money was being spent on the ad, but described it as a "substantial buy."

The new push by the DNC to woo seniors comes as a recent CNN/Opinion Research Corporation Poll shows that 54 percent of people age 65 and older oppose Obama's health care plan, while 41 percent favor it.

[cnn-photo-caption image= http://i2.cdn.turner.com/cnn/2009/images/09/29/art.rockefeller.gi.jpg caption="Sen. Jay Rockefeller told CNN on Monday that he's "disappointed" that President Obama wasn't more forceful in pushing the Senate to include a public option in its health care bill."]

WASHINGTON (CNN) - Sen. Jay Rockefeller told CNN on Tuesday that he's "disappointed" that President Obama wasn't more forceful in pushing the Senate to include a public option in its health care bill.

"A little bit, a little bit I'm disappointed," the West Virginia Democrat told CNN's Wolf Blitzer. "I know he's strongly for it, and I know his tactic has been to let the Congress do his work and then he'll come in when the crunch really counts. What I'm saying is that the crunch is really beginning to count now, and I think he's - I know he's for it, and said so publicly, and campaigned on it, so I think it's important that he come in at this point strongly."

But Rockefeller stopped short of saying that he wouldn't support a bill that failed to include the provision, and pointed out that proposals passed by the House and other Senate committees include a public insurance option.

END_OF_DOCUMENT_TOKEN_TO_BE_REPLACED

"Today's 'Talkin' Texas' webcast by Gov. Perry was deliberately interrupted by a denial-of-service attack, preventing countless users from logging in to view the Governor's remarks," Rick Perry Spokesman Mark Miner said in a statement e-mailed to reporters. "This planned and coordinated attack was political sabotage, and we are working to identify those responsible for this illegal activity."

Pressed on whether or not he thought the campaign of Perry's Republican primary opponent Kay Bailey Hutchison was behind the "sabotage," Miner responded: "I hope not. I hope they would not be that stupid."

The Hutchison campaign denied being behind the attack and aides said that they are "skeptical" Perry's site was even hacked.

END_OF_DOCUMENT_TOKEN_TO_BE_REPLACED

Santorum acknowledged interest in a possible presidential run in a Tuesday conference call with reporters, but he emphasized that his visit to the Midwest political proving ground of Iowa does not mean he is a certain candidate for the Republican nomination. Instead, Santorum said that he is using this opportunity to raise his national profile, and noted he will speak out on issues that he thinks the GOP has failed to effectively address, such as health care.

The former senator credited talk radio with helping the conservative movement regain its momentum, but added that at times it has been "pretty shrill." Santorum said it is now time for Republican leaders to start promoting solutions and policies to counter Obama's legislative agenda. And the former senator said he plans to step up and begin talking about his vision for the future.

While Santorum lost his re-election in 2006, he is still well regarded in Republican circles, particularly among social conservatives.

Scenes from the High Court: The Court readies for a new term 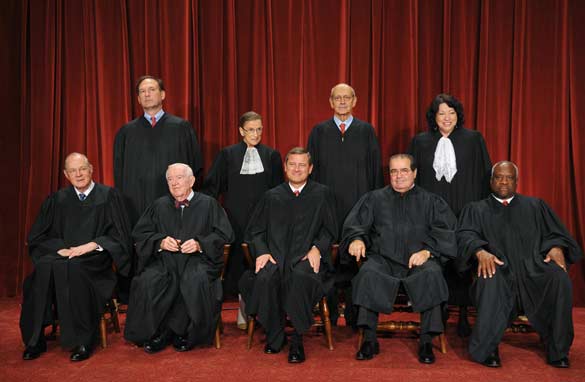 [cnn-photo-caption image= http://i2.cdn.turner.com/cnn/2009/images/09/29/art.bidens0929.gi.jpg caption="The vice president visited with his son Beau during a visit to Iraq on July 4 of this year."]
WASHINGTON (CNN) – Beau Biden, the son of Vice President Joe Biden and Delaware's attorney general, has returned from a year-long deployment to Iraq, according to the Delaware National Guard.

Vice President Joe Biden is set to address his son's unit at a return ceremony in Dover, Delaware on Wednesday, September 30, said Gratteri.

Ted Kaufman, a former chief of staff to Joe Biden when the vice president was a member of the Senate, was appointed by Delaware's governor to fill
Biden's old Senate seat. Many political observers called the decision to appoint Kaufman an effort to hold the seat for Beau Biden to pursue in a 2010 special election after completing his deployment overseas.

Delaware Rep. Mike Castle, long considered a likely Republican candidate for the vice president's old seat, has not officially announced his intention to enter the race.